Betsy DeVos Is Gone, But Her Education Agenda Is Rolling Out Across the Country 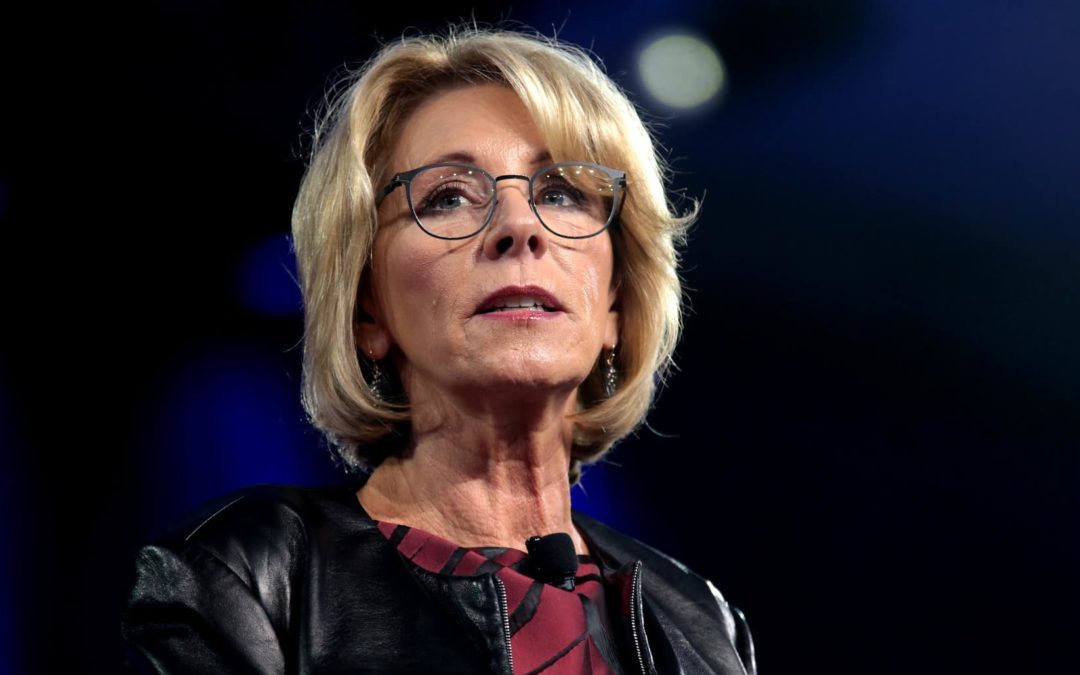 Supporters of public education and school teachers were relieved to see Betsy DeVos leave her job as head of the Department of Education, knowing full well the education policies she and former President Trump supported would go nowhere in a President Biden administration. But they should remain incensed over how her efforts to privatize public schools are being rolled out in state legislatures across the country.

In states as politically diverse as Washington, Arizona, Georgia, Virginia, and New Hampshire, state legislators are introducing bills to increase the number of charter schools and create new school voucher programs or greatly expand current ones. According to the Educational Freedom Institute (EFI), a think tank that advocates for vouchers, charter schools, and other forms of “school choice,” there are at least 14 states actively considering legislation to pour greater sums of taxpayer dollars intended for public education into privately operated schools. Many of the bills have been introduced since the November 2020 elections, which ousted Trump and DeVos but resulted in big gains for Republicans down-ticket.

These proposals to privatize public schools are taking on new forms that are less transparent, would be easier to pass through legislation, and take larger sums of money from public schools, which educate between 80 and 90 percent of American children. Further, the bills are surfacing when public education is highly vulnerable due to the pandemic and the ensuing economic havoc it is wreaking.

In Florida, Missouri, Iowa, and Indiana, lawmakers are considering new bills that condense various “school choice” proposals into a “package” of legislation that can be passed with one vote rather than be subjected to public scrutiny one proposal at a time.

In Florida, Republican legislators have proposed a bill, SB 48, that would expand the state’s school voucher programs, the Orlando Sentinel reports, and “spend more money on them.” Among the many proposals in the bill is to combine the state’s five voucher programs under a single taxpayer-funded source that the Miami Herald describes as “the holy grail in the school-choice movement.”

Funding for Florida vouchers, often called “scholarships,” has come via a program that rewards tax credits to corporations and individuals who donate to a scholarship agency. Under the provisions in SB 48, funding would instead come from government-established educational savings accounts (ESAs) for families to use to pay for educational expenses.

During her tenure as secretary, DeVos repeatedly included a proposal for a federal ESA program in her annual budget, and she advocated for the federal government to create an ESA program for military families. ESAs are popular with school choice proponents because they expand the range of education services that can be purchased with public funds, from private school tuition to tutoring, digital devices, and internet access.

The Florida bill also proposes to expand the number of families who can take advantage of the voucher program. Among those who would become newly eligible, the Florida School Boards Association notes, are students who are already enrolled in private schools or who are homeschooled. In other words, families who are already opting out of public school would now receive a subsidy from the taxpayers to continue to do so.

Another proposal in the Florida bill would make the voucher program less accountable by decreasing the frequency of required program audits from annual to once every three years. ESA programs, however, are in need of even more stringent oversight. A 2018 state audit of Arizona’s ESA program found parents used their debit cards to make “fraudulent purchases and misspent more than $700,000 in public money allocated” by the program, according to the Arizona Republic.

A new bill up for consideration in Missouri calls for a similar “package” of school choice measures, the Missouri Times reports.

The bill, SB 55, originated as a proposal to make public school districts allow homeschooled students to participate, free of charge, in after-school sports and activities. But as the bill made its way through committee, it was loaded with “provisions hostile to public education that have never even had a public hearing,” according to an alert sent out by the Network for Public Education, a pro-public school advocacy nonprofit organization.

Included in the bill is a proposal to allow new charter schools, which were originally confined to just St. Louis and a district in Kansas City, to start up in any municipality with a population above 30,000. Another provision added to the bill would establish a tax credit program, similar to the one in Florida, that allows donors to take a tax credit for their contributions, which are then issued to eligible parents to pay for private school tuition, virtual schooling, or homeschooling.

In Iowa, Republican Governor Kim Reynolds is behind a multipronged privatization effort to create a school voucher program, establish an independent charter school organization to increase new charter startups (the state currently has only two charters), and allow students to transfer out of public schools that have voluntary or court-ordered diversity plans.

The bill, introduced as Senate Study Bill 1065 but now known as SF 159, according to the Network for Public Education, “is being fast-tracked through the state Senate.”

Republican state lawmakers are denying the bill is being fast-tracked, according to the Gazette, but the newspaper’s reporter notes the legislature made “some unusual procedural moves… to keep the proposal moving forward.”

Should the bill pass, “it will take about $54 million and shift it from public education to private,” Iowa Senator Pam Jochum told the Gazette.

In Indiana, the bill Republicans are pushing expands the state’s current voucher program, one of the largest in the country, and creates a new ESA program, Chalkbeat reports.

The Bill, HB 1005, would expand vouchers to wealthier families earning up to about $145,000 per year, nearly double the state’s median family income of $74,000, resulting in a 40 percent increase in the number of voucher-funded students.

The voucher program, which “cost the state about $173 million last school year,” according to Chalkbeat, will add “more than $100 million” to the cost of vouchers in its first year alone. The bill’s provision for a new ESA program is the “most costly element” of the bill, says Chalkbeat, because “[t]he program would be more generous than vouchers.”

This Is Not What People Want

What’s telling about these bills is that proponents of school privatization clearly see the need to quickly ram through their proposals because popular opinion is not necessarily on their side.

Whenever school choice proposals are subjected to popular vote, they generally fare poorly. In 2016, a ballot referendum to expand charter schools in Massachusetts was soundly defeated. The same year in Georgia, a ballot initiative to turn low-performing public schools over to charter management companies was defeated decisively. And a 2018 effort to expand eligibility for Arizona’s voucher program lost at the ballot box.

According to a 2020 poll by Education Next, an organization that advocates for charters and vouchers, “Support for school-choice reforms either holds steady or declines modestly since last year.” The poll found that tax credit programs like the ones proposed in Missouri and Iowa are favored by 59 percent of Republicans and 56 percent of Democrats, but it’s really hard to believe that most people understand these obscure programs and their consequences. Also, charter schools have become highly divisive along party lines, with 54 percent of Republicans supporting them and only 37 percent of Democrats feeling likewise.

What’s also significant about these new school choice initiatives is that Republicans are seeing them as leverage to push through other unpopular measures—in the case of Missouri, to undermine the popular vote and the democratic process used to elect school board members, and in Iowa, to attack racial integration, to undermine the rights of students and families of color, and to continue the dominance of white Western thought in school curricula.

Taking Advantage of a Crisis

School choice proponents also see the crisis caused by the pandemic as an opportunity to advance their cause.

Many parents are beyond distraught with their children’s situation. Also, in communities with high rates of viral spread, which is most of America, state and local governments have generally not invested in the personnel and resources that are essential to safely reopen schools for in-person learning.

Politicians and school choice advocates, many of whom are also complicit in the lack of investment in local schools, see this systemic failure as their chance to vastly expand taxpayer funding for privately operated schools.

Governor Reynolds, in her 2021 Condition of the State speech to the Iowa legislature, declared, “If there’s one thing the pandemic has taught us about education, it’s that our parents need choice. And it’s not just in-person versus virtual. Sometimes it’s about which school to attend altogether.”

That theme is prevalent throughout the right-wing and school choice echo chambers—whose funders generally overlap—from local newspapers, to nationwide campaigns, to mainstream media.

And in some states, the playing field is being tilted to favor non-public schools.

For instance, when private schools in Ohio sued to be exempt from closure mandates issued by local health departments, a federal court agreed. The ruling came at the same time Ohio private schools were getting an enrollment boost where local schools stayed remote.

In North Carolina, when the state announced its pilot program for giving rapid antigen tests to schools, the list included 11 charter schools, and in three of the state’s largest school districts—Mecklenburg, Durham, Forsyth—the only schools getting the tests were charters, reported Carolina Public Press.

But basing broad public policy on the individual choices of some parents during a time of great stress is promulgating a false choice.

Children engaged in face-to-face learning in private and charter schools can still get COVID-19. In North Carolina, figures released by the state health department in November 2020 indicated that outbreaks in private schools made up the majority of school-related COVID-19 clusters in the state.

Also, in most cases, parents switching to charter schools actually reduce their choices by subjecting their children’s education to the whims of charter management companies.

Amid spiking infection rates in Florida, a charter school near Jacksonville decided to end parents’ option to choose online learning for their children. In New York City, the largest chain of charter schools has chosen to offer online learning only. A nationwide survey conducted for Education Next’s journal in November and December 2020 found that 66 percent of students attending charter schools receive remote instruction exclusively, while the percentage of students receiving remote instruction in traditional public schools is less—57 percent.

When school districts make these sorts of decisions, parents can at least voice their opinion at school board meetings, to county commissioners, and with state legislatures. And they do. But parents who enroll in charters, private schools, and other privately run options have no choice other than to leave the school, which, more often than not, is not a practical option, especially in the middle of an academic year.

Would states be ramping up these school privatization efforts had DeVos never set foot in the Department of Education? Probably. But her prominent leadership role and media persona raised public awareness of the well-funded and highly organized effort to privatize public schools and deepened political divisions over charter schools and voucher programs. What Republican state lawmakers are doing with these new legislative efforts will likely worsen those divisions.

Jeff Bryant is a writing fellow and chief correspondent for Our Schools, a project of the Independent Media Institute. He is a communications consultant, freelance writer, advocacy journalist, and director of the Education Opportunity Network, a strategy and messaging center for progressive education policy. Follow him on Twitter @jeffbcdm.