Education Secretary DeVos Is Using COVID To Get What She Wants 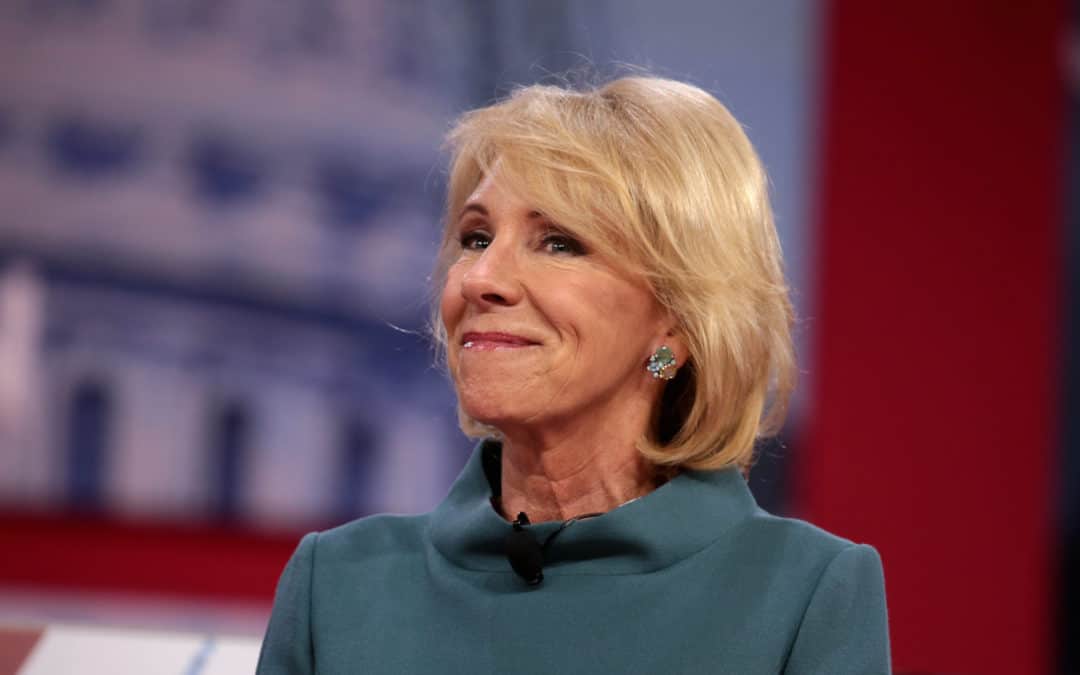 Going beyond the traditional practice of education secretaries to issue guidance on how states should interpret federal law, she now wants to write the laws herself.

Her actions are akin to the executive orders President Trump routinely issues to bypass Congress in order to implement his extremist agenda.

Trump has been mostly able to get away with this. Can DeVos?

Since her bumbling appearances at congressional committees and in media interviews, DeVos has often been caricatured as “incompetent” and “ignorant,” and she may indeed be all of that and more, but it’s dangerous not to see how her agenda is advancing during the current crisis.

No one knows how public schools will be able to reopen for a new school year, and the economic recession caused by the pandemic will likely crush school budgets, but the Trump-DeVos agenda remains public education’s most existential threat, and Republicans either cheerlead these efforts or shrug them off while Democrats muster a haphazard defense. Some may find it hard to believe what DeVos proposes can be carried out successfully, but Republican obsequiousness to radicalism and the amazing knack Democrats have to undermine their own opposition to extremism may ensure she gets her way.

DeVos’s Most Brazen Move Yet

“DeVos has been unabashed in her use of coronavirus funding to further her decades-long effort to divert public dollars to private and parochial schools,” the article in the Times observed, but her latest maneuver has been her most brazen attempt yet.

As retired school teacher and popular blogger Peter Greene explained on Forbes, DeVos is twisting the language of congressional law so that public schools with high percentages of students from low-income households get less assistance, and private school students get more. DeVos’s rewiring of the law could also lead to more federal aid to pay for “extra services” in private schools, such as hiring tutors.

Should DeVos get her way, the impact will be devastating on struggling school districts. As New Jersey-based Education Law Center highlighted in its analysis, in Passaic, where the majority of public school students are poor, the district will need to reserve $1.4 million for private school students instead of the $300,000 it would have under previous interpretations of the law.

In a letter to Ohio Governor Mike DeWine, representatives from a coalition of superintendents and teachers from urban school districts in the state warn that following DeVos’s guidance on CARES Act distribution to private schools “will weaken Ohio’s ability to address the unique needs of low-income children, children with disabilities, students experiencing homelessness, and foster care youth.”

Private school proponents claim that the government has underestimated the relief private schools should get—but Congress has already provided financial aid for private schools through the CARES Act’s federal payroll protection funding for small businesses. Thousands of private schools have applied for and received these loans, CBS News reported. Public schools are not eligible for this funding.

What DeVos is doing has prompted pushback from some progressive Democrats in Congress, especially those with education policy oversight, who said in a letter that her action “contradicts the clear requirements” of the law.

At least one prominent Republican, Tennessee U.S. Senator Lamar Alexander, stated DeVos’s action was not what Congress intended, but he also hedged, “She may have the authority to do that,” and he has done nothing to spur Congress to nullify her action.

Politico reported DeVos responded to Democratic opposition by doubling down with threats to use an obscure clause in the Office of the Federal Register to issue an “interim final rule” that would ensure her interpretation of federal law “becomes effective immediately upon publication.”

Some states have declared their intentions to follow the DeVos guidance, according to Politico, and others intend to defy it, including Republican-led states Arizona, Oklahoma, Mississippi, and Indiana. State education officials in Illinois advised school districts to set aside the money DeVos wants to redirect to private schools, and Michigan’s state superintendent gave district school leaders similar advice. It’s not clear what these states will do after DeVos issues an interim rule.

Other guidance DeVos issued tilted the funding table to favor charter schools, another privatization effort she favors. Federal guidance for the distribution of CARES money limits funds based on the school district’s prior award of federal government Title I money, the federal allotment targeted for schools based on their numbers of low-income students.

If the district got no Title I money in the previous year, its share of CARES money is $0. But here again, DeVos is bending the rules, in this case creating exceptions for charter schools, which are technically considered “districts.” If the charter is new or if it says it is expanding to include Title I eligible students, the new guidance states it qualifies for the funding.

Charter schools are also “double-dipping” into COVID-19 emergency funds, Carol Burris and Marla Kilfoyle report in the Washington Post, by accepting CARES relief funds intended for schools and applying for and receiving forgivable loans from the paycheck protection program. A large charter school in Rhode Island received $4 million through the program, and a charter in North Carolina educating mostly well-off white kids got $550,600, Burris and Kilfoyle report.

Leaders of charter school advocacy and lobbying groups are pushing charters to take these loans even though the schools’ funding streams for this year haven’t been cut off.

In reporting DeVos’s recent actions, HuffPost’s education correspondent Rebecca Klein quoted the advocacy director of a school superintendents group saying DeVos was having her most “successful” time in office yet.

The DeVos Agenda Trickles Down to States

While DeVos is radicalizing education policy at the federal level, her agenda is trickling down to Republican lawmakers proposing extremist school policies at state levels.

In at least 15 states, so far, conservatives are advancing efforts to further privatize public education with school voucher and voucher-like programs, according to EdChoice, a libertarian advocacy group.

A bill proposed in North Carolina would expand the number of families who would be eligible for vouchers, even though an analysis by the Duke Children’s Law Clinic warned that schools receiving the money are not being held accountable for how they spend it, nor is there any reliable way to ascertain the voucher program’s academic outcomes.

Another bill proposed by Republicans in the North Carolina legislature would give families tax credits of up to $2,500 per student if they send their children to private schools and up to $500 per child if they homeschool, the Raleigh News and Observer reported.

In Tennessee, Republicans are determined to create and fund a new voucher program that a Nashville judge ruled is unconstitutional because it targets just two counties—those that include the Nashville and Memphis schools systems—with the largest populations of black and brown students.

In Oklahoma, where school districts are allowed to charge charter schools they authorize administrative fees, Republicans are pushing a measure to give charters a break and lower the fee maximum from five percent to three percent of a charter’s state funding.

In Ohio, Republican Governor Mike DeWine has proposed cutting school budgets at triple the rate of what he would cut from charter schools, reported the Columbus Dispatch. Should his proposal pass, public school districts would, on average, see their per-pupil allocation from the state lowered to $5,082, while charter schools would see their allotment fall to $8,563 per pupil.

Even if these Republican efforts to privatize public schools are not passed and signed into law, they could be successful at shaping education politics.

When framed the right way—under the rhetorical mantra of “school choice”—school privatization can be a popular idea.

However, Democrats, Politico recently reported, “are planning a new line of attack against DeVos over her response to the pandemic,” charging in a memo that she has “used this crisis as an opportunity to push her disastrous agenda that undermines our nation’s public school system.”

The outlet reported Democratic National Committee (DNC) Chairman Tom Perez held a call with the mayor of Southfield, Michigan, and a Grand Rapids teacher, as a first in a series of actions to target battleground states with “press calls, virtual events, guest columns and other digital tactics, utilizing surrogates as well as the voices of teachers, parents, and students and others who have been impacted.”

So what will Democrats’ message be?

One of the most prominent policy arms of the party, the Center for American Progress, recently conducted a series of online discussions called “Ensuring a Quality Education for Every Child.” The series totally neglected the privatization issue and what DeVos is doing on this front.

In a chat called “Beyond the Talking Points: Charter School Policy and Equity,” one of the main talking points was that distinguishing any essential differences between public schools and the charter sector was a “false binary.”

One participant, former school superintendent and CEO of PDK International Joshua Starr, rightly pointed out that there are worthy examples of good education practices in both types of schools, but then denigrated any skepticism of charters as a whole as part of “the kind of oppositional narrative that people are so fond of engaging in on Twitter.”

The other panelists were Laina Cox, a charter school principal; Shavar Jeffries, the president of Democrats for Education Reform, an advocacy group that strongly supports charters and vouchers; and Sharhonda Bossier, deputy director of a membership organization for elevating education leaders of color and former employee of Education Cities, which is also pro-charter.

There were no representatives of classroom teachers or their unions or other public education advocacy groups in the event.

When the DNC chose to kick off its campaign targeting DeVos in Michigan, it was truly fitting, not only because Michigan is her home state, but also because it’s a state with a “deeply dysfunctional educational landscape,” wrote Stephen Henderson, editorial page editor of the Detroit Free Press, upon hearing about DeVos’s appointment to the president’s cabinet. The dysfunction “was created by an ideological lobby that has zealously championed free-market education reform for decades, with little regard for the outcome,” he wrote.

So Democrats are going to go to Michigan and other battleground states to attack DeVos and her agenda without engaging in an “oppositional narrative” about privately operated schools, during a time of crisis, devouring a greater share of public education? Good luck with that.

This article was produced by Our Schools, a project of the Independent Media Institute. Jeff Bryant, chief correspondent for Our Schools, is a communications consultant, freelance writer, advocacy journalist, and director of the Education Opportunity Network, a strategy and messaging center for progressive education policy. His award-winning commentary and reporting routinely appear in prominent online news outlets, and he speaks frequently at national events about public education policy. Follow him on Twitter @jeffbcdm.