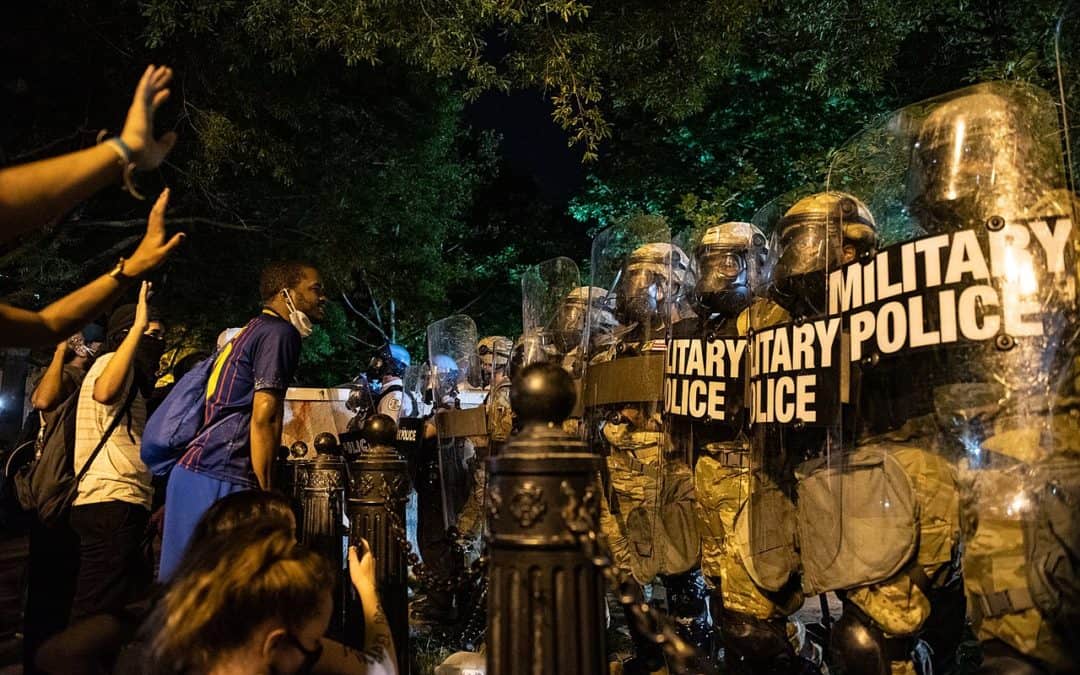 When demonstrations erupted across the country after George Floyd’s death at the hands of police officers, Donald Trump portrayed the protesters as America’s enemies.

Trump called them “thugs,” “lowlifes” and “losers.” He threatened to unleash America’s military on them and fled to a White House bunker while demonstrators gathered in Lafayette Square.

But the protesters posed no threat.

For more than 200 years, ordinary Americans have taken to the streets to oppose injustice and improve their lives. That foundational right has been the basis for real change in the nation.

Americans marched for women’s right to vote. They boycotted buses for civil rights. And they walked picket lines for decent wages and safe working conditions.

These activists wanted a better America, one that actually realized its ideals of equal justice and ensured life, liberty and the pursuit of happiness.

Some sacrificed their bodies for the cause, just like the protesters in Washington did when Trump’s flunky of an attorney general ordered heavily armed federal police in riot gear to attack the peaceful rally in Lafayette Square.

Without the right to protest, there can be no democracy.

Injustice does not cure itself, and protesting can be the only way of seizing the attention of a government that refuses to heed citizens’ pleas for action.

The 1991 beating of Rodney King by Los Angeles police, for example, failed to yield change. The 2014 shooting of Michael Brown by police in Ferguson, Mo., and the deaths of other Black people that followed, also brought little progress.

But the senseless death of Floyd, coming on the heels of a COVID-19 pandemic that disproportionately affected America’s Black communities, is provoking widespread collective outrage that could now effect long-needed change.

The advent of cell phone video helped to galvanize the anger. Americans now can watch the brutality that’s occurred largely out of sight for generations. They’re sick of the violence and want it to stop.

While Floyd’s death is the catalyst for the protests, the demonstrations reflect pent-up frustration with many injustices, including those that solidified over generations and left Black Americans dying at unusually high rates from COVID-19.

With the doors of opportunity closed to them, for example, many Black citizens have no choice but to eke out livings in “essential” low-wage service-sector jobs that require them to go to work—and risk the coronavirus—rather than riding out the pandemic sheltering at home.

Yet America can’t enact a livable minimum wage for these workers. Worse, because these jobs often fail to provide health insurance, Black Americans live with more chronic diseases that leave them susceptible to COVID-19 in the first place.

Police brutality and economic disparities are just two symptoms of the systemic racism that spills over into all areas of life. And it’s this larger oppression that protesters want to overthrow.

When the grief over Floyd’s death erupted, Trump had an obligation to stand with Black communities and condemn the brutality. He had a duty to offer words of healing and unity, and then put America on a path to real change.

He failed to do any of that.

So while Trump sheltered in his bunker, everyday Americans did his job for him. They seized the mantle of leadership and turned out by the hundreds of thousands—staging protests in cities and small towns across the nation—to show they’d had enough.

Far from “lowlifes” and “losers,” these protesters make up a cross-section of decent Americans who want the nation to realize its potential. They’re young and old. They represent all races. The crowds include families, couples, professionals and military veterans.

Some declared they were demonstrating not for themselves but for their children. They recoiled at the thought of America’s institutional racism, its acceptance of police brutality against Black citizens, continuing for another generation.

They want to leave America better than they found it. That’s patriotism.

And Trump gassed them for it.

And Trump told governors he’d send in U.S. troops if they failed to suppress growing protests in their own states.

Using the military to put down protests would be an unprecedented violation of constitutional rights. And it’s too dangerous a threat to sweep aside as another “Trump being Trump” stunt. Only dictators afraid to face their failings turn soldiers against their own people.

When he labeled the demonstrators “thugs” and threatened to shoot them, Trump showed an appalling ignorance for the rich history of protest in America and its enormous capacity to compel change.

During the Great Depression, thousands of World War I veterans descended on Washington to demand bonuses they had earned. The government attacked them, too, before finally agreeing to pay.

The sit-ins, boycotts and marches of the civil rights movement forced state and federal governments to recognize the legal equality of Black Americans.

And the labor movement exists only because of Americans’ right to assemble and protest. Labor strikes ushered in the eight-hour workday and other life-changing improvements for American workers. Today, the USW and other unions frequently rally in Washington to call attention to problems like workplace safety.

Besides fair contracts and safe working conditions, unions remain deeply committed to issues of social and economic justice, from ensuring voting rights to ending poverty and racism. That’s why the USW, its members and other unions stand with millions of other Americans in condemning Trump’s efforts to silence the voices demanding to be heard.

The disturbing images from Lafayette Square and elsewhere across America—of police storming into defenseless crowds—showed the government at its worst.

And ordinary American patriots at their best.

Tom Conway is the international president of USW, the United Steelworkers.