You Are Free To Vote, Even Behind Bars 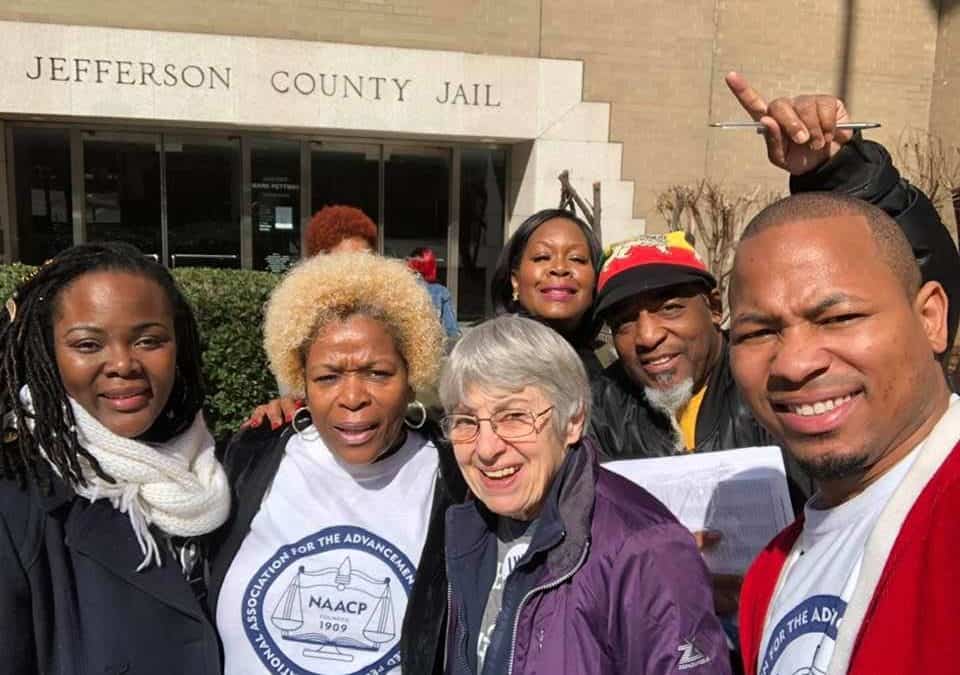 I visited Birmingham County Jail this week to deliver a simple message: you are free to vote, even if you don’t know it. And now is the time for you to claim and exercise this right.

I was joined by allies from the League of Women Voters, the NAACP, prominent Birmingham lawyers and our County Commissioner, Sheila Tyson. All are veterans of voter registration drives, but this was their first time registering voters in a jail or prison. I was there to show them how.

Your right to vote is sacred to me. It’s also personal: After fourteen years behind bars, I had to fight to get my own right to vote back. When I did, I was so proud, I wore my voter registration card around my neck as a badge of honor.

That’s why in 2004, after winning back my own right to vote, I started going into jails and prisons to register new voters. The state of Alabama tried to stop me, so in 2008 I took them to court and won (Glasgow vs Allen, The State of Alabama).

For 106 years, Alabama lied to those who were convicted of felonies and told them they had lost their right to vote forever. Even after I revealed this injustice, they forced the handful who, like me, discovered this was not true to go through a lengthy and backlogged process to regain their right to vote.

In 2017, after campaigns by my organizations, The Ordinary Peoples Society (TOPS) and Prodigal Child Project, Alabama passed the “Moral Turpitude Act,” which overturned once and for all Alabama’s racist interpretation of the law and restored the right to vote for more than a quarter million people - including many who are still behind bars.

Our latest victory is that for this year’s election, Alabama’s absentee ballots now clearly state that you have the right to vote, even if you are currently incarcerated or have a previous conviction. Alabama is the only state in the nation where this is true.

But nearly all of those who now have their right to vote restored still don’t know they have this right. And there are still plenty in Alabama who want to keep us trapped in our Jim Crow past, so want to keep it that way.

We won’t let that happen. That’s why we’re doubling down on our efforts to go in and register voters inside prisons and jails, and also on the outside. Our goal is to reach at least half of Alabama’s reenfranchised voters by going in to every one of our hundreds of state, city and county jails and prisons.

To reach them all, we’ll need all the help we can get. So we’ve formed a coalition called Alabama RACE (Restoring Alabama's Civic Engagement) alongside leading voting rights organizations in our state, including the League of Women Voter, NAACP, Hometown Action, the American Civil Liberties Union, the Southern Poverty Law Center and the Alabama Black Womens Roundtable, and  are training volunteers to register incarcerated voters, as well as inmates, so they can register their peers on the inside, as is their right.

If we can reach even a fraction of these untapped voters, we can make a tremendous difference in our state. By 2017, TOPS and the Prodigal Child Project had registered nearly 10,000 incarcerated voters. That helped elect Doug Jones to the U.S. Senate, the first time a Democrat had won in our state in fifteen years.

And for each voter we register inside a prison or jail, there are two to five loved ones or family members on the outside who are inspired to register, too. That’s the real power of this hidden vote.

Jones is up for reelection this November, as is President Trump. So we all know what’s at stake for the nation. But when I go behind bars to register new voters, I never ask if you’re a Democrat, or a Republican. I don’t care about that. What I do care is that you know that you, like every citizen – Black or white, incarcerated or not – are free to vote.

We need your help to make sure all citizens have access to the ballot.