In Praise Of Scabby The Rat 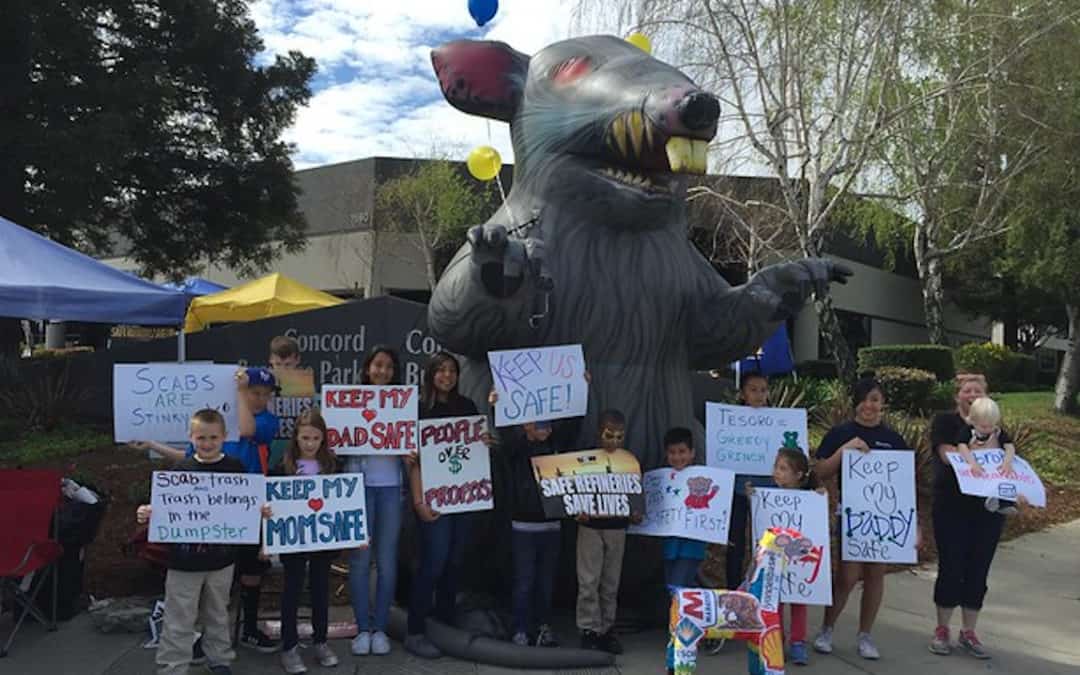 Big balloons shaped like rats, cats, pigs and cockroaches so frighten Robb that he has used his office to take extraordinary steps to outlaw them.

This petty attempt to deflate labor power symbolizes just how far the Trump administration will go to crush the very workers that Trump constantly pledged to protect during his campaign. In 2.5 years, his administration has refused to raise the 10-year-old minimum wage, significantly diminished the number of workers who will be eligible for overtime pay under new regulations, petitioned to decertify the immigration judges’ union, issued executive orders making it easier to fire federal workers and weakening their unions, and failed to secure for workers that $4,000 raise that Trump pledged his tax cuts for the rich would provide – to name a few betrayals.

But nowhere is the campaign to trample workers worse than it is at Trump’s rigged NLRB.

Just to be clear, the point of the 1935 National Labor Relations Act, also known as the Wagner Act, was to encourage unionization. This was during turbulent times. From 1933 through 1935, more than a million workers a year launched thousands of walkouts, sit-down strikes and picket lines. These actions significantly disrupted a depressed economy.

The law formalized a process under which workers could form unions and bargain for better pay and benefits. As a result, it virtually eliminated the need for one type of strike – those to demand that corporations recognize labor unions.

The NLRB, created by the National Labor Relations Act, is supposed to safeguard workers’ rights to organize.

In an 80th NLRB anniversary commemoration document, former board chairman Mark Gaston Pearce wrote:  “Enacted during the Great Depression, the Act was designed to restore prosperity – to put more money in the pockets of working Americans, by making it possible for them to organize labor unions and to engage in collective bargaining with their employers.

When President Franklin Roosevelt signed the law in 1935, he said that its goal was to achieve ‘an act of both common justice and economic advance.’ Since then, millions of American workers have freely chosen to join unions, and collective bargaining has helped Americans to build and keep a middle-class society, through good economic times and bad.”

Under the Trump administration, however, the NLRB is systematically thwarting workers’ attempts to organize. Trump appointed the three Republicans on the board, who dominate the four-member panel.

The anti-union labor board is defying a pro-union environment in this country. A 2018 survey found 62% of Americans approve of unions, a 15-year high. Another 2018 survey found that 48 percent of nonunion workers would join if given the opportunity. That is a sharp rise over the percent in two earlier surveys and suggests that 58 million American workers would sign up given the opportunity. That would quadruple the current number of union members.

Workers who want a union and those already in one had reason to believe Trump would support them.  Repeatedly on the campaign trail, Trump said, “The jobs, incomes, and security of the American worker will always be first priority.” Workers represented by labor unions earn more money, receive better benefits and labor in safer conditions than those who are not organized. If a president’s first priority is workers’ jobs, incomes and security, then his labor board would protect union rights, not upend them.

Trump’s NLRB, however, is reversing gains workers received under the Obama NLRB. In addition, the Trump NLRB is going the extra mile to undercut workers’ rights – including contending that protest balloons, such as the rat nicknamed Scabby, must be deemed illegal because the inflatable animals “coerce” employers to do unions’ bidding.

A good example is the Trump NLRB’s divergent positions on the speed of elections.

The NLRB believes delaying elections sought by unions is fine but those sought by employers must be sped up. This is significant because when workers want the NLRB to conduct an election to determine if more than half of employees want union representation, corporations often hire union-busting law firms to arm-twist workers to vote no. Corporations want extra time before a union election so they can pinpoint and fire union organizers and conduct forced-attendance meetings with workers during which they threaten to close or move the factory if workers vote for the union.

Labor organizers want the election held as soon as possible after they determine they have sufficient support. The Obama NLRB issued rules providing for quicker elections, but the Trump board has made it clear it intends to kill them.

When workers want more time before an election, however, the Trump NLRB plans to deny that. The board in August issued proposed regulations to make it easier for corporations to destroy unions, including refusing to delay a union decertification vote after a labor organization files unfair labor practice charges. That way, union leaders will have less time to persuade wavering members that they should vote to retain representation, even when employers have violated labor law by threatening and haranguing workers.

In July, the NLRB decided that a corporation may withdraw its recognition of a union – even when the union is able to present evidence that a majority of workers, in fact, support the union. This new rule, created out of whole cloth, forces the union to seek an NLRB election to reinstate it as the bargaining representative and gives the company time to bully or bribe workers into voting no. In the specific case the NLRB reviewed, the company went with a bribe. It announced wage and benefit hikes immediately after it withdrew recognition of the union, in effect telling workers they didn’t need representation because the benevolent corporation would take care of them.

This is the kind of situation that union workers might protest with a Scabby the Rat balloon, or giant inflatable “pluto-cat” dressed as a CEO and clutching a worker by the neck. Or a floating cockroach or flying pig.

The NLRB and courts, most recently on June 19, have repeatedly upheld the legality of such protests. But Robb doesn’t care. He says they’re all wrong. Robb has instructed a regional office to file a complaint against a union for protesting with a “pluto-cat,” and to use the case to overturn three previous decisions allowing balloons. So Scabby’s days may be numbered.

That is, until a union appeals the NLRB decision to a court. There’s no doubt a judge will once again rule that unions have the right to fly protest balloons. It may take until Labor Day 2020 for that decision to arrive, though.