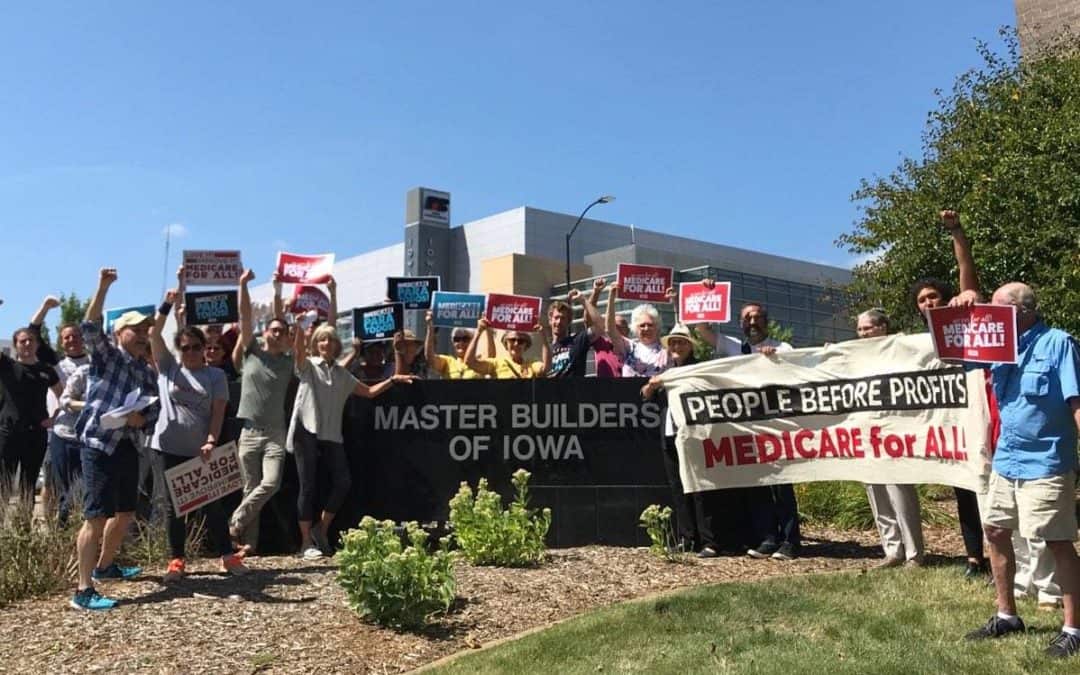 Last week I took over the lobby of the Master Builders of Iowa in Des Moines with 30 other members of Iowa Citizens For Community Improvement Action, the largest progressive organization in our state, with members in all of our 99 counties.

Why, you might ask, did we choose to challenge this association of Iowa’s largest contractors, who hold the bulk of Iowa’s commercial, industrial and public works building projects?

The answer is simple: they’re opposed to Medicare For All.

We know MBI opposes Medicare For All, because they’re members of the Partnership for America’s Health Care Future. This D.C.-based shadow lobby was founded by the nation’s largest private insurers, hospitals and pharmaceutical companies last year to kill legislation and public support for single-payer health care in this country.

For me, affordable health care is not just an idea: it’s a necessity. I’ve forgone getting certain medications because of the outrageous cost - $600 for one prescription to treat an infection - and other bills needing to be paid. Instead, I go with the less effective “over the counter” option and cross my fingers the infection doesn’t flare up.

I’m far from alone. Every day Americans die because they can’t afford the insulin they need to live, or ration or substitute their medications with less-effective generic versions. Lives are lost to satisfy big pharma’s corporate greed.

I’ve also argued for days with the for-profit managed care organizations who provide – and sometimes don’t provide – the lifesaving care my mother and aunt need at a local nursing home.

Two weeks ago, my brother-in-law died. The end of his life was horrible, because when what he needed was hospice and palliative care to ease his pain, he got more tests and delays that prolonged his unnecessary pain and suffering. Instead of the care he needed, he got more billable services to feed healthcare profiteers. That’s not right.

So that’s why I showed up at the Master Builders of Iowa headquarters. Every one of us had our own reasons.

I was fired up, and looking for Chad Kleppe, MBI’s president and CEO. I wanted to let him know that as long as they’re members of the Partnership, they’re standing in the way of the care that my brother-in-law deserved, and the care I, my mom, aunt, and every American deserves.

We went there to give Chad Kleppe and the MBI a choice: he can stand with everyday people and be on the right side of history, or he can continue to be complicit in the lies that the Partnership and its major members - big pharma, insurance companies, and private hospitals - tell the American people.

Why, you might ask, do the Master Builders of Iowa care so much about health care? That’s a good question. Are they looking to get more contracts to build hospitals, pharmacies and clinics? Or have they simply bought into the Partnership’s vile and misleading rhetoric, that working people don’t actually need access to affordable health care? Regardless, it was our duty to go there and let them know the truth behind the Partnership’s lies, and offer them a choice.

The Partnership spends millions of dollars to convince Americans that they don’t actually need better health care. They oppose single-payer health care, as presented to Congress by Sen. Bernie Sanders and Rep. Pramila Jayapal in the Medicare for All Act of 2019, and say it would bankrupt our country, close hospitals, and lead to worse care than we’re currently receiving.

In August alone, the Partnership has spent over $225,000 in the Des Moines media market to spread these lies. That’s over and above the tens of millions they’ve spent on lobbying and ads since they were founded in the spring of 2018.

But Iowa CCI Action and other members of the People’s Action won’t be fooled - not now, not ever. More and more everyday people across the country are realizing that the only way to fix our broken health care system is to eliminate the incentive to put profits before patients, by adopting the single-payer health care that has been proven to work in so many other countries.

The Partnership wants to enlist local partners like MBI, the Iowa Retail Federation and the Dubuque Area Chamber of Commerce, to make it look like there’s a groundswell of popular support for taking away health care. There’s not.

Back in April, People’s Action members occupied the Partnership’s headquarters in Washington, D.C. and Sen. Mitch McConnell’s office to protest their obstruction of Medicare For All. Then in June, People’s Action members of the Jane Addams Senior Caucus took over the American Medical Association’s annual meeting in Chicago to demand they end their opposition to Medicare For All.

Someone must have been listening. Earlier this month,  the AMA pulled out of the Partnership.

At Iowa CCI Action, we are very clear that we need more health care, not less. And it’s the current corporate model of putting profits before people that has led us to our healthcare crisis.

We’re organizing our communities to flip that model on its head: we want to put people before profits, and get corporate profits out of our healthcare system.

We won’t rest until we win. We are organized, unafraid, and history is on our side. The time for Medicare for All is now - right now, not tomorrow. And all means all: everybody in, nobody out.

Are you with us?

Cherie Mortice is retired public school teacher from Des Moines, Iowa and a board member of Iowa CCI Action, part of the People's Action national network of grassroots groups, which has members in all of Iowa's 99 counties.