The AMA Gets Out Of The Way Of #MedicareForAll 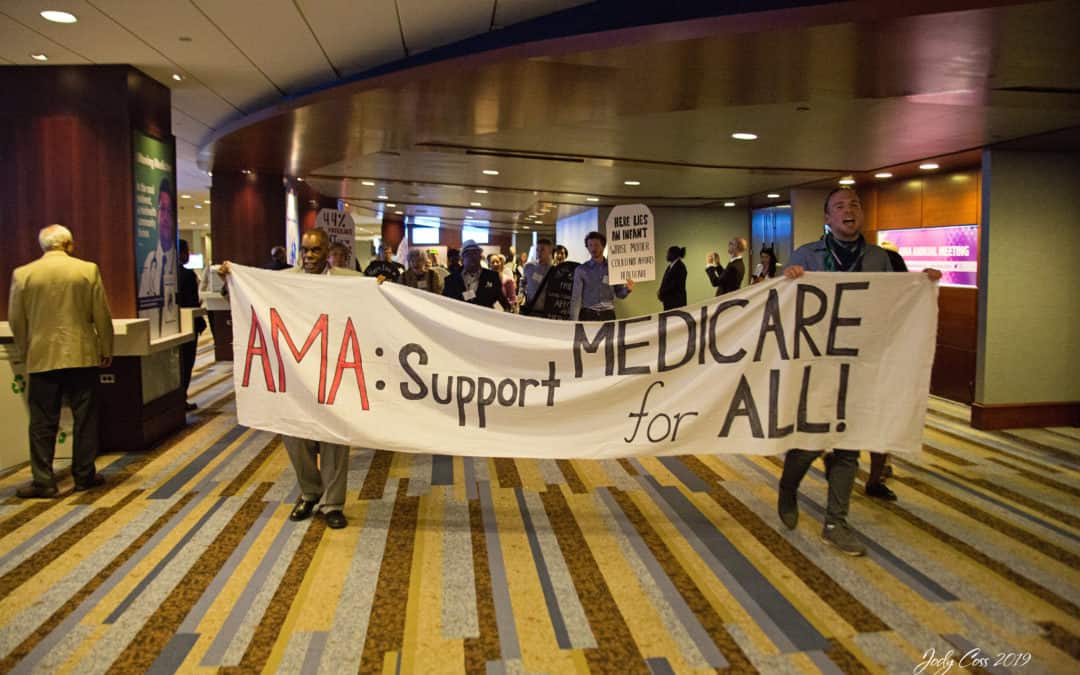 In a major step forward in the fight for universal health care, the American Medical Association (AMA) has quietly pulled out of a lobbying group that seeks to undermine the growing support for Medicare For All.

“The AMA has made the right - if overdue - call by leaving the Partnership For America’s Health Care Future, and to stop giving their credibility to this effort by big corporations to put profits before people’s health,” said George Goehl, the director of People’s Action, one of the nation’s largest networks of multiracial grassroots groups, which has made the fight for Medicare For All a top priority.

In April, nearly a thousand People’s Action members took over the lobby of the Partnership’s offices in Washington, D.C., to demand that the PAHCF and its member organizations end opposition to universal health coverage.

“We’re here because we’ve had enough,” wrote Goehl and Maria Elena Letona, the board president of People’s Action Institute, in a letter the activists delivered to the PAHCF. “We’re calling on PAHCF to immediately cease and desist from all attempts to undermine Medicare For All, and join us in the fight to ensure that health care is a right for everyone.”

The PAHCF was formed in 2018 by the nation’s largest drugmakers, insurance companies and private hospitals, including Blue Cross/Blue Shield, the Federation of American Hospitals and Hospital Corporation of America (HCA) to oppose Medicare For All. The AMA was a founding member of the organization.

Despite its benevolent-sounding name, this Partnership was formed with the express intent to kill momentum towards universal health coverage. The PAHCF spent $148 million on lobbying members of Congress in 2018 alone, according to data compiled by the Center for Responsive Politics.

The PAHCF has spent millions more this year on lobbying and ads against Medicare For All, including $200,000 on television ads in Iowa alone this month - an effort to influence the views of presidential candidates and voters in that early caucus state. 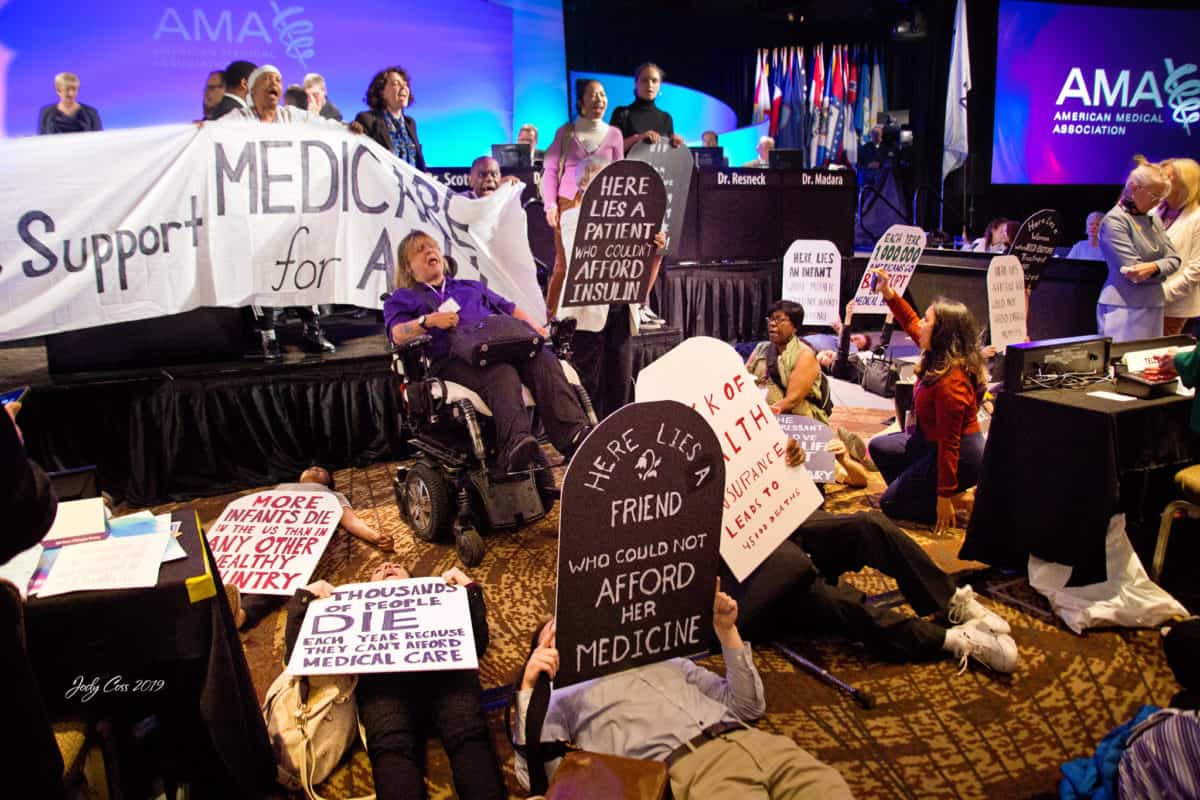 “I have to believe that if the members of the AMA can see the faces – our faces – and hear our voices, the voices of those directly affected by the denial of care, they will come around and demand that their organization support Medicare For All,” said Reggie Griffin, a 78-year-old member of the Jane Addams Senior Caucus, who participated in the AMA “die-in.”

AMA members did listen as People’s Action members - some in wheelchairs - held the floor and gave personal testimonies about how they have been harmed by our country’s failed health care system.

And now Reggie’s words seem to have been prophetic, as the AMA has pulled out of the PAHCF. On August 15, the AMA’s logo quietly disappeared from their website, and the group later confirmed to POLITICO that it was no longer part of this anti-Medicare For All organization.

"They caved to the hard left, plain and simple," a representative of one of the PAHCF’s other member organizations told POLITICO. "This is about members of the AMA, not members of the partnership." 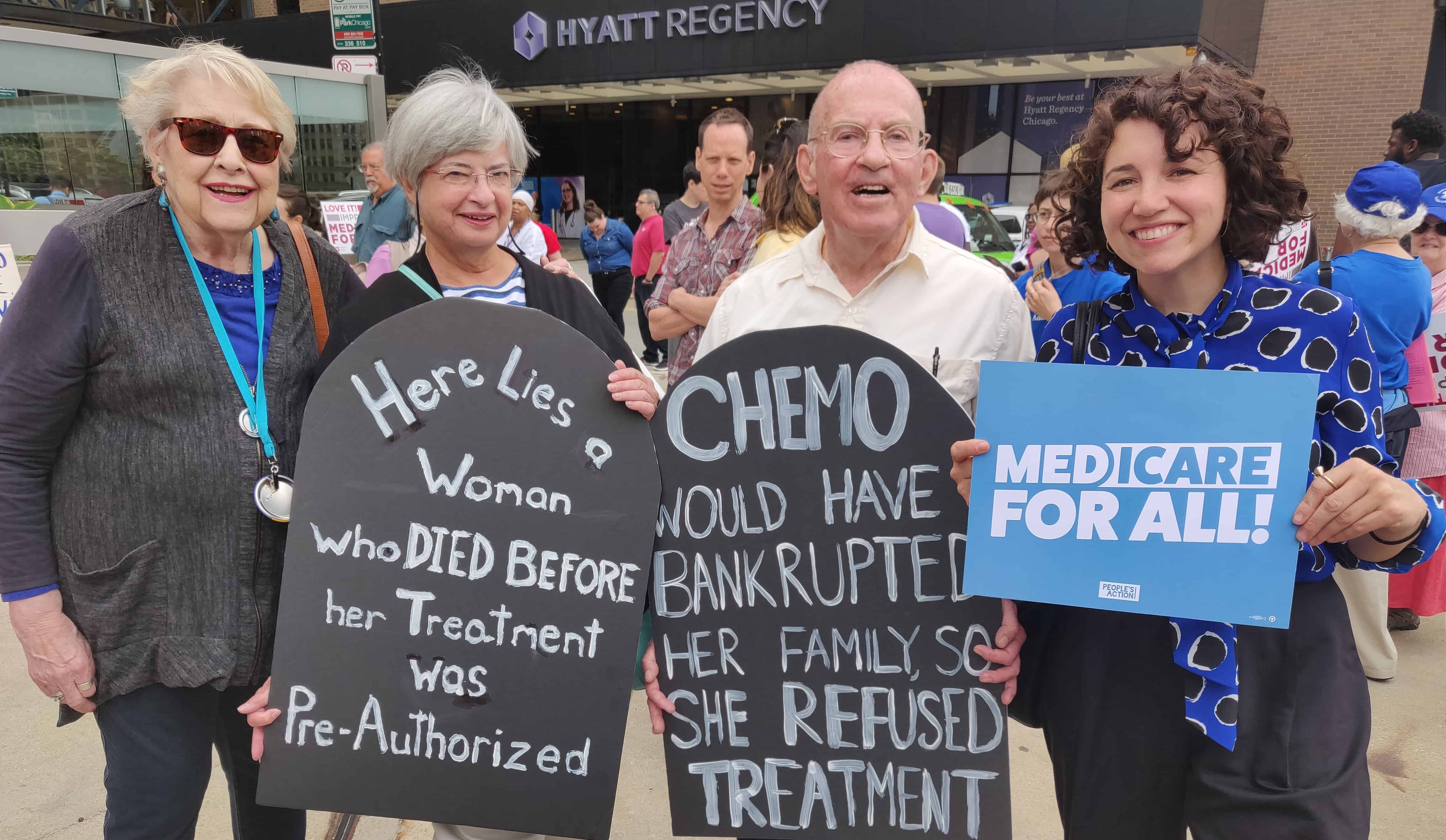 While People’s Action, the Jane Addams Senior Caucus and other member groups welcome the AMA’s change of heart, they won’t back down - because they know their work is far from over.

"We're glad the AMA has finally seen the light, and has stepped aside in the best interest of everyone - patients and physicians," said Connie Huynh, who helped organize the protests in Washington and Chicago, and leads People's Action's ‘Health Care for All’ campaign. "But we won't rest until everyone has the health care we all need and deserve: Medicare For All."