Co-Governing Puts Us ‘In The Room Where It Happens’ 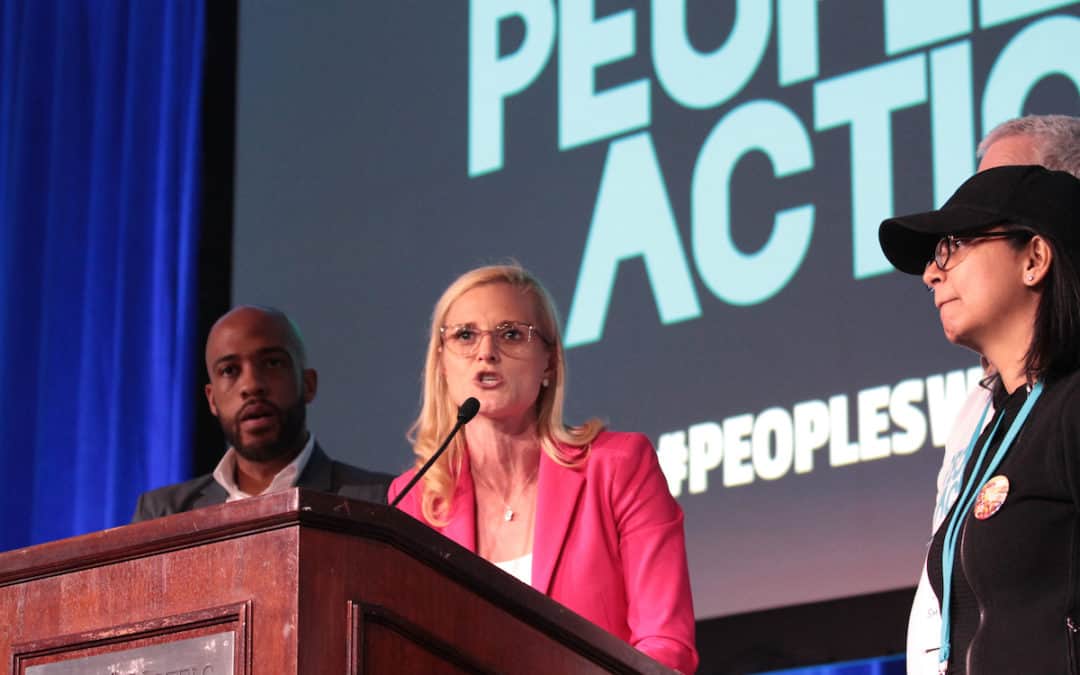 What does it mean to move “from protest to power?” That’s the question People’s Action members like me asked at our national convention in Washington, D.C. two years ago. At that time, just a few months into the Trump administration, 72 grassroots leaders out of the more than twelve hundred gathered there took a pledge to take action by running for public office.

Many of these activists - and even more from our network across the country - have now made good on these commitments. They are part of the #PeoplesWave of officials we have helped elect. In all, 300 candidates endorsed by People’s Action got elected in midterm and municipal elections, and 150 of these are movement activists who rose up from the ranks of our own member organizations.

“On election night I didn’t win, WE won!” said Sarah Godlewski, Wisconsin’s newly elected State Treasurer, when she spoke to a gathering of these newly minted electeds last month, as People’s Action members gathered once again in D.C.

At this year’s convention, these leaders celebrated their victories and began to dig in on what it means to move from protest on the outside of government to power on its inside, and importantly, linking the two together.

Sarah had never considered running for office, but as a longtime member of Citizen Action of Wisconsin (CAWI), she was part of the fight in April of 2018 to save the State Treasurer’s office from former governor Scott Walker’s attempt to dissolve the office so he could put the state’s finances under his own control, to eliminate oversight.

Sarah and CAWI won that fight, and when no people’s candidate stepped forward to run for State Treasurer, Sarah put herself in the ring. Sarah has a financial and government background - she co-founded a socially conscious investment fund after working for the U.S. State Department and Department of Defense.

Now, as Wisconsin’s Treasurer, Godlewski has followed through on her commitment to co-govern. She regularly appears on CAWI’s weekly podcasts, and has jointly organized events to build community awareness about the ways she’s using the State Treasurer’s office to lower interest payments on student loans and to solve difficult public pension issues.

Tasha Green, the first Black woman elected to City Council in the Detroit suburb of Westland, Michigan, also finds that staying rooted in her community is her key to success in governing. As the only woman and person of color on the Westland City Council, she entered office without any natural allies but has achieved legislative success as a result of her close collaboration with the Michigan People’s Campaign, of which she remains a member.

Together, Councilwoman Green and the Michigan People’s Campaign were able to stop the expansion of a toxic incinerator, and then shut it down altogether. To do this, they conducted research together, then developed a strategy to mobilize voters not only in her district, but also in those of her colleagues. This was clearly a victory which neither the organization nor Councilwoman could have won without their close collaboration.

At this year’s convention, Sarah and Tasha shared these experiences with fellow members of
the People’s Action Movement Co-Governing Cohort and brainstormed about the many challenges presented by this new dynamic of operating both inside and outside the halls of power.

There is a lot that is new and experimental with the idea of co-governing. The term itself was hardly even in existence in 2017, when those initial pledges were made, and when People’s Action began a structured internal conversation around the idea.

To People’s Action, co-governance means that once elected, officials will continue to listen to and actively work with our communities - rather than corporate lobbyists - to draft policies and move them forward, together. Co-governance is about finding innovative ways to ensure the people most harmed by structural racism and our profit-driven economy have a seat at the table when we find solutions.

This means, to quote Lin-Manuel Miranda’s “Hamilton,” that the people, finally, get to be “in the room where it happens.”

Make The Road By Walking

While the term co-governing is becoming more familiar, there is still no clear roadmap to it as a destination. But we are convinced that it is vital that we figure out a new and more democratic model for governing that engages the grassroots if we are to ever prevail on winning power and implementing People’s Action’s Long-Term Agenda for Structural Change.

There is still much to learn. In a workshop on co-governing at this year’s convention, organizers struggled with the tension of being both “inside” and “outside”of governing power.

“Once they get elected, we have be ready to kick their ass.” That’s the adversarial position community organizers have historically defaulted to in their relationship with those who hold elected office.

It’s been a good one. But it can oversimplify one of fundamental questions of a democratic society: how to establish a partnership between electeds and those they represent. Co-governing opens the door to a relationship that can make ass-kicking unnecessary.

One workshop leader confessed that after working hard for three years to elect a candidate, she immediately defaulted to thinking their relationship should become formal and transactional, based on past experiences. She had a hard time thinking anyone in elected office could think of poor and working people as fellow travelers, rather than as just another group to mollify.

Several participants described situations where they feared elected officials were “selling out” when they engaged in negotiation, a major and intractable tension of co-governing.

Clearly, the weight of experience has led many community activists to feel “sold out” when our demands get tossed out once the folks who get inside the room cut the final deal.

But increasingly, as we gain power and get closer to that room ourselves, we also struggle with the opposite problem: if we insist on an all-or-nothing approach that puts purity over progress, we can snatch defeat from the jaws of our hard-won victory.

This tension between principle and pragmatism lies at the core of co-governing, and will always be there because the line between necessary and unacceptable compromise is never as clear as we’d like.

What must be figured out for co-governing to flourish is for the community, its leaders and our electeds to fashion clear parameters, bottom lines and processes that guide us in making these difficult judgments together. Only experience can be our guide.

It requires meaningful community engagement that both inform those bottom lines while providing the kind of political education that allows rank and file members to become shrewd and sophisticated political actors capable of advancing the boldest narratives and agendas while discerning what’s actually possible to win now.

Co-governing may still be a grand experiment, but it’s one that’s becoming more real every day. And as Sarah, Tasha and other members of People’s Action Movement Co-Governing Cohort work out the inherent obstacles and tensions within co-governing, they make it more viable, and we can already cite important examples of breakthroughs and success that can lead us forward.

David Hatch is a longtime community organizer in Chicago, where he was executive director of Reclaim Chicago and founder of The People's Lobby, part of the People's Action national network of grassroots groups.