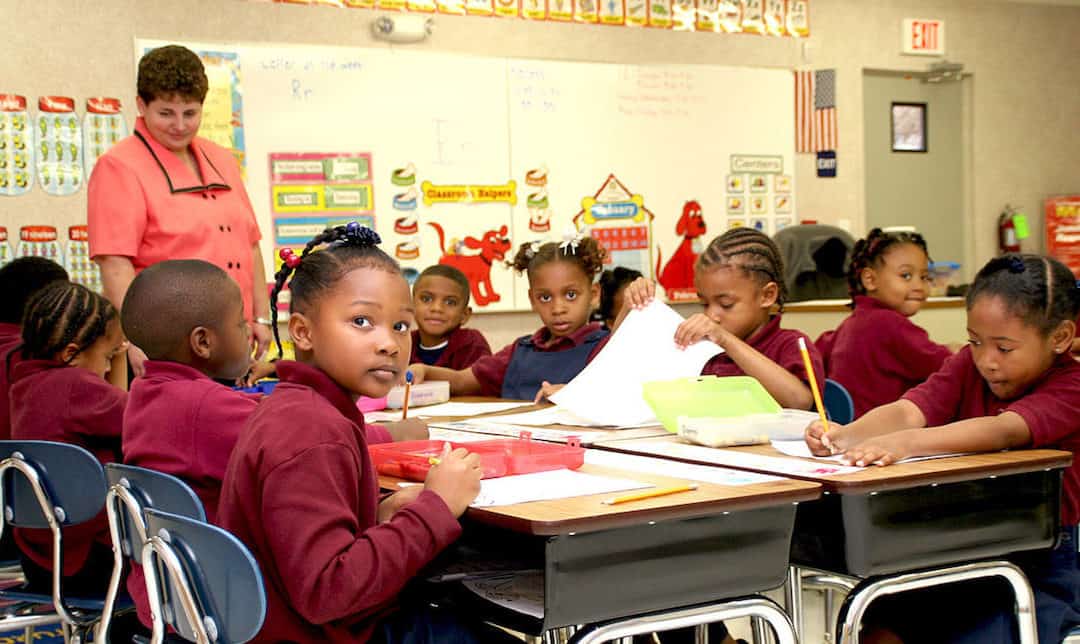 When Arne Duncan, the U.S. Secretary of Education under President Barack Obama, said Hurricane Katrina was the “best thing that happened to the education system in New Orleans,” he was no doubt referring in part to how the storm and its aftermath led to the spread of charter schools across the city.

But if he had looked more closely before making his remark (he eventually apologized for his poor word choice), he would have noticed some of the new charter schools being created in New Orleans were already failing.

The very first charter school created in the post-Katrina era to close was Free Academy, which shuttered in early 2009—well before Duncan made his remarks—due to financial problems, lack of academic progress, and disputes with the school’s for-profit management company.

After Free Academy closed, many of the students scrambling to find new schools likely ended up in the Crocker Arts & Technology School, another charter school, which opened in the fall in the same building. But that school proved to be a false promise too when, on a Thursday evening in early December, parents learned Crocker had to close, literally overnight, due to its unsafe building.

The century-old structure was close to collapse, a condition that existed no doubt when the school was Free Academy and when Crocker decided to occupy the building. Officials at both schools either didn’t know or knew but didn’t bother to warn parents their children were in an unsafe building.

Duncan should have been concerned about these failed charters not only because of the potential harm the schools posed to students but also because the federal government helped to fund the schools.

The grant came from the Department of Education’s Charter Schools Program (CSP), which provides grants to individual charter schools and charter school management companies, and for states to award to charter subgrantees. Louisiana used its 2006 grant to fund individual charters, mostly in New Orleans, including $283,847 awarded to Free Academy and $600,000 to Crocker.

After two more relocations, Crocker would eventually close for good in 2014.

Another reason Duncan should have been more inquisitive about how charter schools had used federal grant money in Louisiana is because his department, during the first year under his leadership, awarded the state yet another huge grant—this time totaling $25,576,222, mostly to bolster the state’s existing charters and start new ones in Baton Rouge.

Since Duncan’s tenure, the CSP’s annual budget has ballooned to $440 million, in the current budget year, and the total amount spent by the program since inception exceeds $4 billion.

But like those early grants to charters in post-Katrina New Orleans, much of that money has gone to schools that eventually closed—and some that never opened at all.

According to a recent report, up to $1 billion of the money given out nationwide by the CSP was wasted on charter schools that never opened, or opened and then closed because of fraud, poor performance, financial mismanagement, and other reasons. The report, Asleep at the Wheel: How the Federal Charter Schools Program Recklessly Takes Taxpayers and Students for a Ride, was published by the Network for Public Education and written by this author and Carol Burris, NPE’s executive director.

In compiling our report, we found the grant program that provides federal dollars to state departments of education, or other approved “state entities,” is the largest of the CSP funding streams and presents some of the worst examples of federal tax dollars being wasted on charter schools that failed. Louisiana has one of the worst records for slipshod management of its federal grants.

In a follow-up to our report, Burris looked at the grants given to create and expand charter schools in Louisiana between 2006 and 2014. She found that of the 110 charters that received the money, at least 51 (46 percent) were closed. Some may have never opened at all, but because the Louisiana Education Department doesn’t provide a list of closed schools, that figure is unknown. The total amount of money given to those closed and never-opened schools is at least $23,819,839.00.

An 'Illegal Experiment' on Children

While the numbers alone are startling and a cause for concern, individual examples of charters in Louisiana that received CSP money and then closed throw into further doubt the prudence of using federal seed money to spread schools that open and close, repeatedly, and fund charter organizations that churn through districts and neighborhoods without any obvious regard for what parents and local officials want.

One of the examples I singled out from Burris’ research is Benjamin Mays Prep School in New Orleans, which received a $600,000 CSP grant. Mays Prep had long-standing academic issues and persistent budget shortfalls. The school had to move to a different building in 2012 and then lost that location in 2014 when its charter wasn’t renewed and a different charter moving into the space refused to enroll the Mays students. The school closed officially in 2014.

Another New Orleans charter, Miller McCoy, received a $600,000 CSP grant but eventually closed in 2014 after “a long downward spiral,” according to a local news source. The charter school’s two founders left in 2012 under alleged ethics allegations, and the school had a series of unsuccessful leaders after that. An “F” academic rating from the state seemed to have been the final straw.

The school had promised to be equivalent to a prestigious all-male private prep school in New Orleans, only free. Its closure left the teachers and remaining students and families with “a sense of loss, sadness, a grieving for what could have been,” reported a different local news outlet.

Another New Orleans charter, Gentilly Terrace, received a $600,000 CSP grant. The school was operated by a charter management group, New Beginnings Schools Foundation, that was cited for being out of compliance with several federal laws, including misdirection of federal funds for Title I schools—­money earmarked for high-poverty students. New Beginnings also had chronic problems with employee turnoverin its schools and non-transparent practice by its board of directors.

Gentilly Terrace closed in 2014 with a “D” rating from the state’s academics report card. Recently, the CEO of New Beginnings resigned amid allegations of falsifying public records and allowing one of its three remaining schools to engage in grade-fixing.

CSP grants that were awarded to schools in Baton Rouge often led to the same results.

When the Recovery School District that transformed New Orleans started taking over “low-performing” Baton Rouge schools in 2008, one of the first seven schools taken over and handed to charter operators was Glen Oaks Middle School. Glen Oaks received $772,750 from the CSP.

Parents in New Orleans who are sick of the instability that temporary charter schools have brought to their community are organizing to repeal the state law that legalized charters, calling the schools an "illegal experiment" on their children.

By 2013, the takeover effort was already “rebooting,” and Glen Oaks was closed, supposedly temporarily, for the 2014-15 school year in order to find a different charter management group. Students were told to transfer to a different school operated by a different charter but were presumably able to return to Glen Oaks the following year.

But instead of reopening as a middle school, Glen Oaks was occupied by three new charters: a kindergarten, an elementary school, and a different middle school operated by a different charter management company.

Glen Oaks closed officially in 2016, according to state reports, and by 2018, both the kindergarten and the elementary schools had moved elsewhere too.

Today, what remains inside Glen Oaks Middle School is a much smaller middle school under a different name. That school is currently rated “F” academically by the state, which recently recommended the school be handed over to yet another charter management group.

Some Louisiana charter school CSP grant recipients that have managed to stay open seem on less than firm ground.

Baton Rouge’s Tallulah Charter School, which was awarded a CSP grant of $75,000, was threatened with shutdown in 2018 for persistent low academic performance and testing errors.

What saved the school was an offer from an online learning charter school to move students to a blended curriculum that included more computer-based instruction. The online charter recently dropped its affiliation with an out-of-state for-profit company and changed its name. The school has a 54 percent graduation rate compared to the state’s 79 percent.

Parents in New Orleans who are sick of the instability that temporary charter schools have brought to their community are organizing to repeal the state law that legalized charters, calling the schools an “illegal experiment” on their children.

These kinds of examples eventually drew the attention of the education department’s own Office of Inspector General to examine the agency’s oversight of the federal Charter Schools Program in 2016, after Duncan had resigned and John King became secretary.

The audit made recommendations for improvement on the oversight of federal grants given to charters that close, but it’s not at all clear how those recommendations were implemented under King’s leadership, or under Betsy DeVos, who took over as secretary in 2017.

In 2018, OIG published another examination of how states with charter schools that closed accounted for federal grant funds. This time, Louisiana was included in the audit because it was the state with the highest ratio of closed charter schools to total charter schools.

The audit found charter schools in Louisiana that received federal money and then closed likely had widespread violations of federal laws and regulations for closing out their grants, disposing of property purchased with federal funds, and ensuring student information and records had been protected and maintained.

The audit found charter schools in Louisiana that received federal money and then closed likely had widespread violations of federal laws and regulations for closing out their grants, disposing of property purchased with federal funds, and ensuring student information and records had been protected and maintained.

In its comments included at the end of the report, the department did not explicitly agree or disagree with the findings but stated it “did not consider charter school closures to be a risk to federal funds” and that OIG’s recommendations “would be inconsistent with the federal role in education.” The department asked instead for “a single recommendation that recognizes the balance between federal and state responsibility for the oversight of charter schools.”

Recently, House Democrats proposed a substantial cut to CSP grants, declaring the education department has not been “a responsible steward” of taxpayer dollars. House members cited, as part of their rationale for the cuts, evidence of financial waste and mismanagement like those Burris and I found. And the Democrats directed the education department implement recommendations from the 2018 OIG report.

Among those recommendations are for the department to determine which states receiving charter school grants pose the most risk to federal funds and help those states develop and implement effective charter school closure procedures. Should the House bill pass, you can be sure Louisiana will be on that list.

But the legacy of the federal government’s charter school grants in Louisiana should not be understood just by the sheer waste of precious education funds, but also by the real human consequences of spreading makeshift charter programs that throw communities into confusion, distress, and a sense of betrayal. That’s probably something you won’t hear Arne Duncan apologize for.