Alabama Won’t Roll Over To The Rising Tide Of Hate 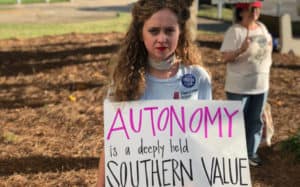 Alabama Governor Kay Ivey just signed the most restrictive anti-abortion law in the country. Once again, the people of Alabama are left to fend for themselves. This should come as no surprise: Alabama’s law is a direct consequence of progressives’ collective decision to disinvest in the South and cede an entire region to the Far Right. As a result, statehouses across the South have become a rich sea of Red. I live in Montgomery, the first capital of the Confederacy. But it’s also less than a mile from where Rosa Parks refused to give up her seat on a city bus, sparking the birth of the modern Civil Rights movement. This tension embodies what I feel today as an Alabamian. There’s no denying that we have a hell of a lot of problems, and a painful legacy – but we also have a legacy of standing up and speaking out. People think of us as homogenous and white – but the South I know is the one where people of color, queer and nonbinary folk can come together with country folks, people on the Gulf and in the foothills of Appalachia, to share our strengths, not our prejudices. We come together to take back the spaces we love and change the things that hurt us. Elected officials are bargaining Alabama’s people will just roll over and get out of their way. But we’ve got news for them. This Alabama – Hometown Action’s Alabama, the one we believe in – won’t roll over. We’re taking back our communities, and power in our own lives. No one can take this from us – not now, not ever. You can help, by supporting our work.

Alabama aims squarely at Roe, but the Supreme Court may prefer glancing blows. NYT: "Abortion rights are at risk at the Supreme Court, but the short-term threat may not come from extreme measures like the one passed by Alabama lawmakers. As soon as Monday, the court could announce whether it will hear challenges to three provisions of Indiana abortion laws on issues like the disposal of fetal remains and an 18-hour waiting period after state-mandated ultrasound examinations. The court will in the coming months almost certainly agree to hear a challenge to a Louisiana law that could reduce the number of abortion clinics in the state to one. The Alabama bill, signed into law on Wednesday, is a different kind of measure, one that squarely conflicts with Roe. It would ban almost all abortions in the state, without exceptions for rape and incest, and subject abortion providers to harsh criminal penalties. Chief Justice Roberts is a product of the conservative legal movement, and his general inclination is to lean right. But he is also an institutionalist and a guardian of his court’s authority, meaning he generally makes modest and deliberate moves."

Missouri Senate passes strict abortion bill. AP: "Missouri’s Republican-led Senate has passed a bill to ban abortions at eight weeks of pregnancy. Senators approved the legislation 24-10 early Thursday with just hours left before lawmakers’ Friday deadline to pass bills. It needs at least another vote of approval in the GOP-led House before it can go to Republican Gov. Mike Parson, who supports it. The bill only allows exceptions in cases of medical emergencies, not rape or incest. The Missouri bill comes as abortion opponents across the U.S. push for new restrictions in hopes that the more conservative U.S. Supreme Court will overturn its landmark Roe v. Wade ruling legalizing abortion. Kentucky, Mississippi, Ohio and Georgia have approved bans on abortion once a fetal heartbeat is detected, which can occur in about the sixth week of pregnancy. Alabama’s governor signed a near-total abortion ban Wednesday."

Republican senators meet with Jared Kushner on immigration, conclude he's clueless. WaPo: "President Trump’s son-in-law, Jared Kushner, faced pointed questions about his plan to overhaul the immigration system in a closed-door meeting with Republican senators Tuesday — and failed to offer solutions to some key concerns, according to GOP officials who cast doubt on the viability of the proposal. Publicly, senators emerged from their weekly Capitol Hill luncheon applauding the White House senior adviser’s pitch to move U.S. immigration toward a merit-based system that prioritizes highly skilled workers, a task he undertook at Trump’s behest. But privately, Republican officials said Kushner did not have clear answers to some questions from the friendly audience, prompting Trump’s other senior adviser, Stephen Miller, to interrupt at times and take over the conversation."

CFPB Chief Says Education Department Is Blocking Student Loan Oversight. NPR: "The director of the Consumer Financial Protection Bureau says the Trump administration's Education Department is getting in the way of efforts to police the student loan industry. The revelation, in a letter obtained by NPR, comes at the same time that lawsuits allege widespread wrongdoing by student loan companies is costing some borrowers thousands of dollars. CFPB Director Kathy Kraninger explained the problem in an April letter responding to questions from Sen. Elizabeth Warren and other lawmakers about whether the federal regulator had 'abandoned its supervision and enforcement activities' related to more than $1 trillion in student loans. A central issue is that companies that manage student loans, known as student loan servicers, are refusing to share information that the CFPB says it needs to perform proper oversight. 'Since December 2017,' Kraninger wrote in the letter, 'student loan servicers have declined to produce information requested by the Bureau for supervisory examinations' related to federal student loans. She said servicers are not sharing the information because the Department of Education has issued guidance telling them not to do so."

Will John Bolton finally get his war with Iran? The Guardian: U.S. officials this week accused Iran of orchestrating 'sabotage' attacks on Saudi tankers near the Persian Gulf, escalating an already tense situation between the two countries. President Trump ramped up his own rhetoric, telling reporters that 'it’s going to be a bad problem for Iran if something happens … they’re not going to be happy.' With the notoriously hawkish National Security Advisor John Bolton whispering in Trump’s ear, are these signs that the administration is putting the U.S. on a path to war? Donald Trump’s national security adviser John Bolton wants the United States to go to war with Iran. We know this because he has been saying it for nearly two decades. And everything that the Trump administration has done over its Iran policy, particularly since Bolton became Trump’s top foreign policy adviser in April of 2018, must be viewed through this lens, including the alarming US military posturing in the Middle East of the past two weeks."