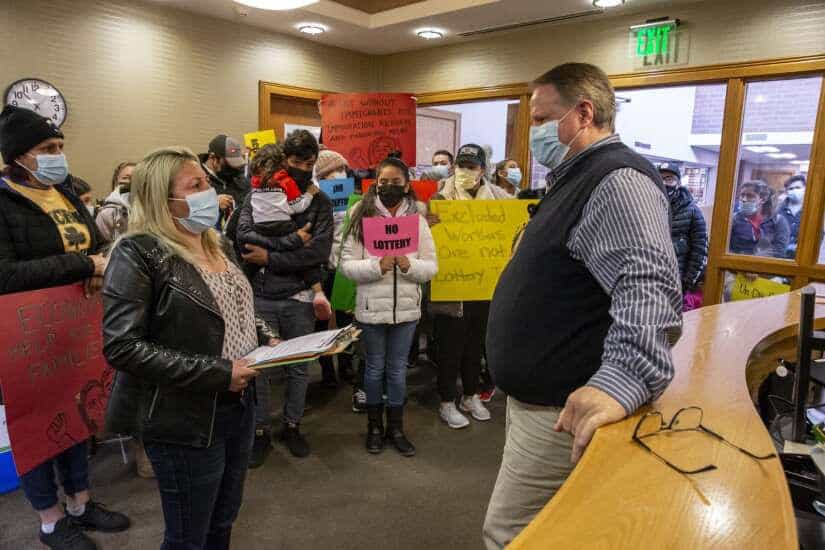 Grassroots organizing in Iowa won a major victory for working people on Feb. 17 when the Johnson County Board of Supervisors voted 3-2 to invest $2 million of local American Rescue Plan money on an Excluded and Essential Workers Fund. The city of Iowa City also contributed $1.5 million to grow the direct assistance program to $3.5 million.

The new $3.5 million direct assistance program is set to distribute relief checks of $1,400 later this year to 2,500 excluded workers and other county residents who were negatively impacted by Covid-19.

"This is a historic victory for immigrants and working-class people in Iowa, but it has to be fully funded and prioritize excluded workers or its impact will be limited," said Manny Galvez, a unionized public-sector worker and member of the Iowa Fund Excluded Workers Coalition.

To qualify, residents must have lived in Johnson County, Iowa since March 1, 2020, make less than $45,000 a year, and have faced at least one negative economic impact during the pandemic, such as unemployment or exclusion from federal stimulus payments.

Up to 30,000 Johnson County, Iowa residents may be eligible to apply for the new program, but the initial $3.5 million investment by city and county governments is only enough funding for 2,500 people to receive a $1,400 check.

If more than 2,500 people apply, a controversial lottery will randomly select award recipients. The Feb 17 vote by county supervisors was split 3-2, with the minority voting to break consensus in an effort to prioritize excluded workers, who faced multiple and overlapping negative economic impacts such as layoffs, unemployment, AND ineligibility for previous federal relief.

"The Johnson County Excluded and Essential Workers Fund has the potential to become a permanent direct assistance program that can benefit the community now and for many years to come," Manny Galvez, the Iowa immigrant rights leader, said.

"But it has to be fully funded, with no lottery and no workers left behind. We won't stop fighting until everyone gets the help they need."

The Johnson County Excluded and Essential Workers Fund was won after a hard-fought, year-long campaign by front-line immigrant workers and a coalition of 18 community organizations, labor unions, and racial justice groups. Over the course of nearly 12 months, grassroots leaders knocked on thousands of doors, organized mass community meetings, and mobilized hundreds of immigrant workers to stand up and speak out at civic input sessions and public meetings.

Time and time again, dozens of excluded workers stepped out of the shadows for marches, rallies, and press conferences to tell their personal stories about surviving the Covid-19 pandemic without relief.

These old-school methods and fierce fight-back mentality make this local ARP victory in Iowa an important case study in the organizing revival currently underway in community and labor networks across the country.

As front-line workers and other directly impacted people emerge from the economic wreckage of the Covid-19 pandemic, their legitimate grievances and mass discontent could form the basis of a potent force to be organized into a new base of grassroots power before the midterm elections later this year.