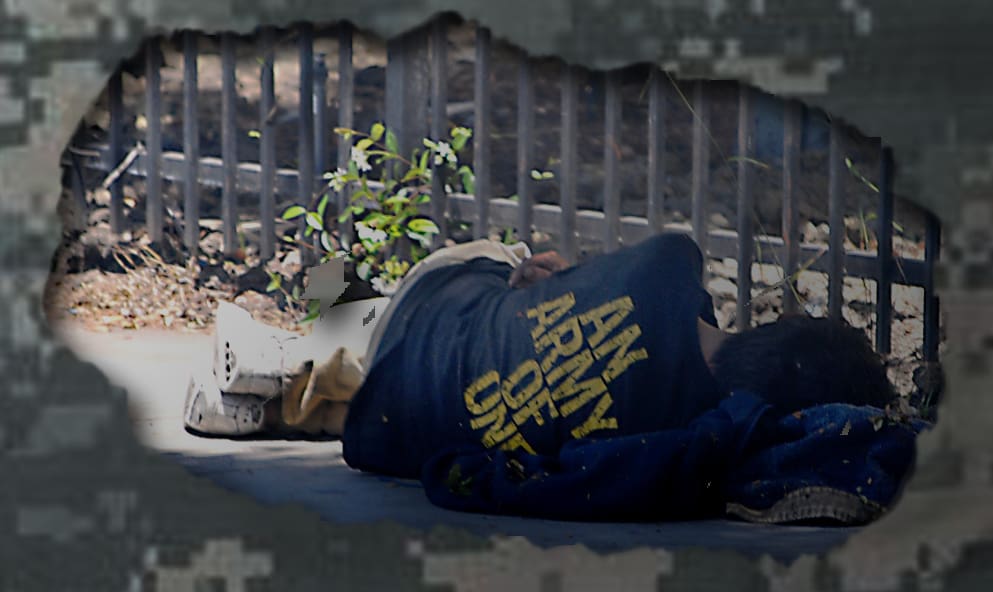 Under normal circumstances, Jerry Porter would be spending his time helping the veterans he finds in tent camps and run-down housing.

But the escalating threat of COVID-19 forces the community activist and retired Steelworker to remain at home for now, even though vulnerable vets need him more than ever.

As the coronavirus spreads across America, the poor bear the brunt of a pandemic that’s exposed the deep class lines in U.S. society.

But Americans at the margins, including homeless vets who rely on a frayed safety net stretched to the breaking point by COVID-19, now face an even greater struggle to survive.

“I don’t know where they end up,” rued Porter, 75, a Vietnam veteran and longtime member of United Steelworkers (USW) Local 105 who worked more than 40 years at the aluminum plant in Davenport, Iowa, now owned by Arconic.

Porter and a group of friends work together to help veterans in the Quad Cities area of Iowa and Illinois.

But now, they’re heeding the request of public health officials. They stay home to help their community slow the spread of COVID-19.

That prevents them from helping veterans like the one Porter found sleeping on a squalid mattress in a “junky” house. He got the man into a clean apartment and—thanks to a friend who owned a bedding store—a new mattress and box spring for just $180.

Just as alarming, COVID-19 halted the fund-raising supporting that kind of intervention. Local veterans groups just canceled a taco dinner and a poppy sale that together raise about $6,000 each year.

For some veterans, that money is the difference between sleeping indoors or on the street.

Porter and his friends use some of the funds to provide life’s basics to the homeless vets they move into government-subsidized housing with little but the clothes on their backs.

Twice a year, advocates in the Quad Cities hold “stand down” events that serve as a one-stop shop for veterans needing anything from counseling to jobs.

Porter already worries that the three-day event planned for September will be canceled because of COVID-19, leaving veterans to face a long winter without important services.

Porter’s union job ensured good wages, a pension and affordable health care. He devotes his retirement to the less fortunate, feeling a duty to fellow vets with no one else to help them.

The federal government fails veterans who struggle to find adequate employment or wrestle with health problems, such as post-traumatic stress disorder.

For example, the nation hasn’t adequately addressed the challenges that doom many vets to unemployment or low-wage jobs. Among other problems, veterans have difficulty converting their skills to the private sector, finding purpose in civilian work and obtaining occupational licenses enabling them to apply skills learned in the military.

Raising the federal minimum wage to $15 an hour, up from the current $7.25, would benefit about 1.8 million vets, along with millions of other Americans, who barely scrape by. The House last year approved a bill to increase the minimum wage, but Senate Republicans refuse to act on it.

Although significant progress in combating veteran homelessness has been made in recent years, unemployment, low wages and health problems still force veterans onto the streets or into shelters. About 40,000 are homeless, and 1.4 million more are only a lost paycheck or other crisis away from losing the roof over their heads.

A collection of government agencies and nonprofits operates soup kitchens, shelters and other services to serve America’s homeless. But this underfunded system is strained to capacity even in ordinary times.

Volunteers like Porter provide crucial support, stepping in when government agencies don’t know who else to call for help.

A veterans hospital once contacted Porter and asked him to help a man who lived outdoors. His tent was broken, and rain kept getting inside.

Porter picked up the vet and drove him to see a friend who owned an awning company. The businessman fixed the tent for free.

In a crisis, like the COVID-19 pandemic, this patchwork system is easily overwhelmed.

Some service providers already reduced services or limited new admissions to slow the spread of the disease.

Agencies closed drop-in centers where homeless veterans can get out of the elements. Some now want to counsel clients remotely, even though homeless people may not have cell phones.

And in the Quad Cities, Porter and his crew are sidelined, too.

Homeless vets face even greater odds during the COVID-19 crisis even though they have a higher risk of contracting the disease than other Americans.

Many live in cramped quarters without the social distancing and sanitary measures vital to controlling the virus. The closing of libraries, malls and coffee shops deprived them of places to wash their hands. They have nowhere to isolate themselves if they get sick.

Some cities are scrambling to place homeless people in places such as unused motel rooms, vacant houses and recreational vehicles on public streets. The goal is to disperse the population and keep the disease from spreading like wildfire if someone contracts it.

While the COVID-19 crisis is unprecedented, the slapdash response underscores how fragile the safety net for America’s homeless really is.

As cities struggle to adapt, the ranks of the homeless likely will grow because of the economic slowdown, putting more stress on the overtaxed system.

The government’s response to COVID-19 must include injecting funds into programs that support homeless veterans and keep other vets from losing their homes.

But federal officials also must think about what the economy and social-service network will look like after the pandemic.

That means better funding a system now overly reliant on fundraisers like taco dinners and poppy sales. It means comprehensively addressing the problems servicemen and servicewomen face when they leave the armed forces.

Thoughtful interventions will save lives, says Porter, who recently ran into the veteran he rescued from the “junky” house.