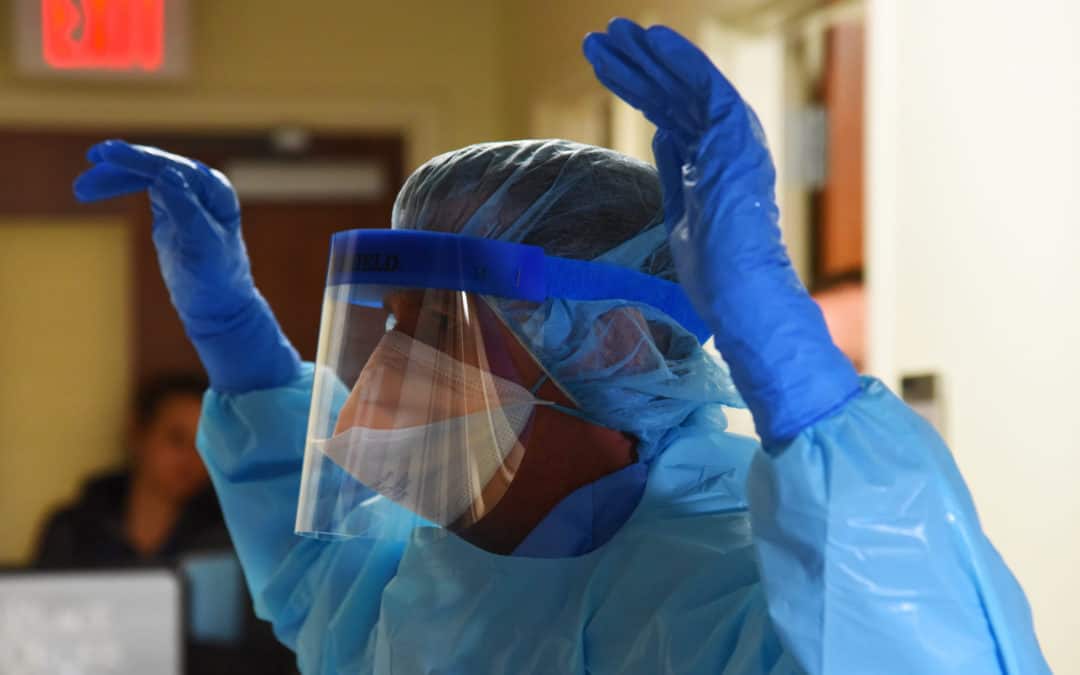 Kimberly Delbrune-Mitter, a cardiac nurse, cares deeply about her patients and remains steadfast in her desire to help them, even as COVID-19 spreads across America.

What plagues her about the new disease isn’t that she might encounter it. It’s the lack of guidance, vital information that would help her balance quality care and her own health.

Medical professionals looking to the Trump administration for leadership will hear nothing but a resounding silence.

Instead, people on the front lines have to fight for their own health and safety even while they care for their patients.

A group of labor unions, including the United Steelworkers (USW), last week sent Labor Secretary Eugene Scalia a petition demanding that the Occupational Safety and Health Administration (OSHA) implement an emergency safety standard to protect health care workers, first responders and others at risk of contracting the virus on the job.

The unions and the workers they represent want OSHA to specify the types of equipment employers must provide and the procedures they must follow to keep workers safe.

For hospitals, this could mean providing doctors, nurses and others with the most advanced facemasks on the market. It could mean minimizing the number of people who enter a patient’s room, screening workers for sickness at the start of their shifts or providing staff members with a vaccine when one becomes available.

So far, they’ve received no response.

While the Trump administration fiddles, hundreds of health care workers already are quarantined because of possible exposure to COVID-19, and many others have questions about how to do their jobs without contracting the disease.

“Do we need to wear eye shields? Do we need hair caps? Do we need gowns?” asked Delbrune-Mitter, president of USW Local 9620, which represents about 500 nurses in New Jersey.

Right now, each hospital, clinic and doctor’s office is largely free to take whatever precautions it wants. At some hospitals, nurses cite a lack of personal protective equipment like facemasks and say their employers haven’t even told them how to identify patients who might have the disease.

If large numbers of health care workers get sick or quarantined, the whole treatment system could collapse.

When severe acute respiratory syndrome (SARS) struck Toronto in 2003, health care professionals became the biggest victims, making up 45 percent of those infected. A doctor and two nurses died. The city’s hospitals were so poorly prepared for infection control that they became breeding grounds for the disease, the very places where most people contracted it.

Clearly communicated safety precautions for COVID-19 will prevent a similar catastrophe limiting medical personnel on the job at a time they’re crucially needed.

Sadly, this isn’t the first time health care workers had to lead OSHA to provide common-sense protections in the face of a deadly disease.

HIV struck seemingly out of nowhere more than 30 years ago, battering patients’ immune systems before killing them. Unsure how it spread and fearful of the future, health care workers risked their own lives to treat the victims.

Research soon showed that HIV is spread through an infected person’s blood. Health care workers risked infection when they accidentally got stuck by a needle or when a patient’s blood got into a cut or scrape. Other serious diseases like hepatitis B are spread the same way, and workers demanded that OSHA set standards so they would remain safe on the job.

OSHA implemented those measures, known as the bloodborne pathogens standard, in 1991 and revised them several years later.

Workers made this happen.

Among other provisions, the standard requires that needles be equipped with safety devices that cover or retract them immediately after use.

Employers must provide gloves and other personal protective equipment to workers, decontaminate surfaces any time they’re touched by blood or other fluids, and track accidental needle sticks. Needles and other sharp objects must be discarded in puncture-proof containers. These provisions protect patients as well as health care workers.

Some hospitals opposed the bloodborne pathogen rules because they didn’t want to shell out a few extra bucks to keep workers safe.

But the standard’s effectiveness cannot be denied.  Since it was implemented, HIV and hepatitis B infections among health care workers plummeted.

Even after OSHA imposed the standard, health care workers continued fighting to make their workplaces safer.

At Robert Wood Johnson University Hospital New Brunswick in New Jersey, that meant looking for new ways to further reduce the accidental needle sticks that can transmit HIV and hepatitis.

Nurses represented by USW Local 4-200 tested various syringes, lancets and IV insertion tips, then began using the ones they considered least likely to cause accidental sticks. Between 2010 and 2014, the hospital reduced needlestick injuries by 70 percent, an achievement that won the nurses recognition in a national health care journal.

These kinds of safety measures are the result of workers’ and unions’ relentless fight for health and safety.

The USW and other unions began pressuring OSHA for an infectious disease standard long before anyone ever heard of COVID-19.

Their demand for infectious disease controls goes back years, amid outbreaks of other diseases, including SARS in 2003 and the H1N1 flu in 2009, that exposed the nation’s lack of readiness for epidemics.

That delay now haunts the nation. The federal government and health care organizations are as poorly prepared for an epidemic as workers knew they’d be.

Delbrune-Mitter said the lack of clear safety direction from federal officials leads some staff members to mine TV and the internet for information.