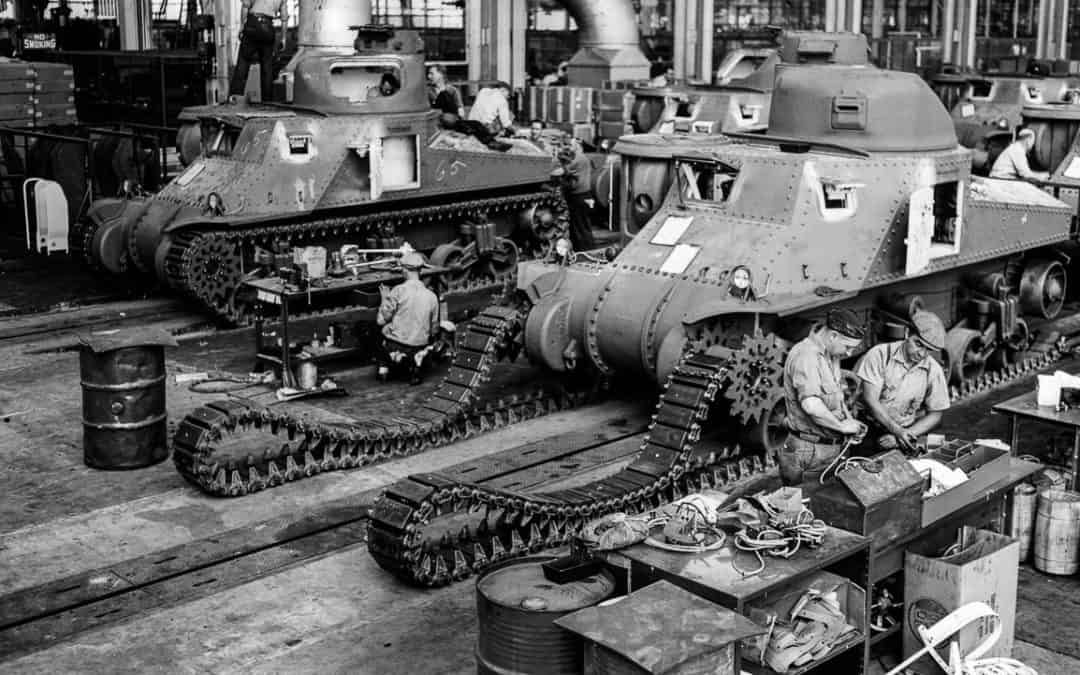 Within two weeks after the Japanese attack on Pearl Harbor, American auto factories were already converting to make tanks instead of cars.

The government needs to treat the Covid-19 pandemic like a war - except the enemy is an invisible virus rather than a foreign power. No, President Trump, the enemy is not China.

On Wednesday, Trump invoked the Defense Production Act, a Korean War-era law, that empowers the federal government to direct private companies to meet national security needs. But for inexplicable reasons, Trump said he has no immediate plans to use it. Instead, he told states and municipalities to find them on their own, and tweeted:

“I only signed the Defense Production Act to combat the Chinese [sic] virus should we need to invoke in in a worst case scenario in the future. Hopefully there will be no need…”

On Tuesday, Trump told governors on a conference that state and local governments should find their own equipment. “Respirators, ventilators, of the equipment - try getting it yourselves.”  On Thursday, he doubled down, saying, the Federal Government "is not a shipping clerk," and that Governors should fend for themselves.

Meanwhile, health care workers are facing this crisis heroically, even if our president won't. In New York, Boston and Seattle, nurses and doctors have set up their own makeshift assembly lines to create protective kits with donated sports goggles, bandannas and parts purchased at Home Depot.

Is the President a moron? Please, don’t bother answering that question. This already is a worst case scenario - and it's not in the future, but now. Indeed, it’s been a worst case scenario for weeks. Rather than predicting the virus would miraculously disappear, Trump should have been preparing infrastructure to save lives, and ordered American companies to step up manufacturing and distributing life-saving equipment weeks ago. It can’t wait another day!

With an impending shortage of tens of thousands of life-saving ventilators, testing kits, protective equipment for health care workers, and other critical medical supplies, putting this law into effect would enable the Federal government to order American companies to convert to mass producing and distributing this equipment on an emergency basis, as they converted from making cars to tanks within weeks after Pearl Harbor.

Other countries are already rushing to build more ventilators. The U.K. has already asked carmakers Rolls-Royce and Jaguar to make ventilators. In Germany, where there is currently a surplus of ventilators, the government has ordered 10,000 more ventilators from Draegerwerk AG, the company’s largest single order ever. American automakers, including Ford and G.M., have already offered to shift manufacturing capacity to medical equipment.

The Federal government will need to subsidize the cost. Ventilators are expensive, and existing factories will need to be retooled. According to The Washington Post, orders have not flooded in since most hospitals can’t afford to increase inventory of expensive equipment that may never be fully amortized. But the Federal government can borrow plenty of money at near zero interest rates to subsidize these purchases.

The government will also have to pay to train civilian and military health care personnel to properly operate the equipment and provide them with masks and protective clothing so first responders don’t get the virus.

Speaker Pelosi has called for immediate implementation of the Defense Production Act, stating

Right now, shortages of critical medical and personal protective equipment are harming our ability to fight the coronavirus epidemic, endangering frontline workers and making it harder to care for those who fall ill. The President must immediately use the powers of the Defense Production Act to mass produce and coordinate distribution of these critical supplies, before the need worsens and shortages become even more dire. There is not a day to lose.

Trump and Pelosi may not be speaking since Pelosi tore up Trump’s State of the Union address. But a virus isn’t political. It equally attacks Republicans, Democrats and independents; Americans, Chinese and Italian nationals; men and women; people of all races, religions and ethnic backgrounds.

The time for a World War II-like mobilization to defeat this enemy we all share is now!