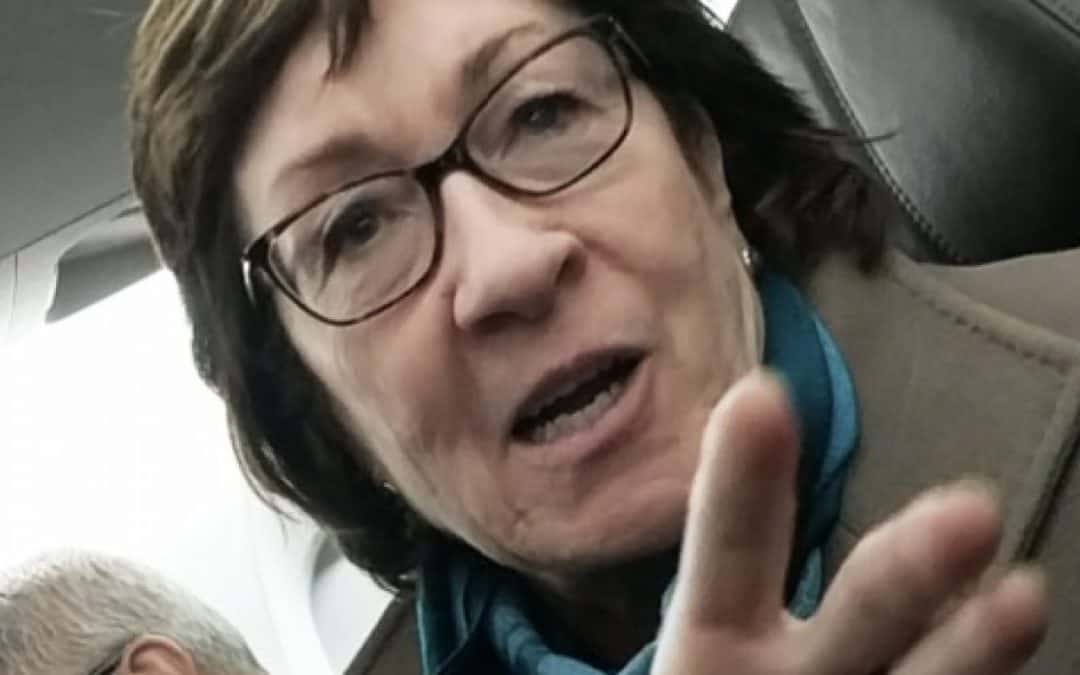 In a conversation with a constituent last week, U.S. Senator Susan Collins at first flatly denied she had accepted money from both the Sackler family, owners of Purdue Pharmaceuticals, and drug company giant Eli Lilly.

The Sacklers have admitted to misleadingly pushing the addictive painkiller OxyContin and are currently being sued by Maine and other states over their role in the opioid crisis. Eli Lilly has dramatically hiked the price of insulin and faces a class action lawsuit for their alleged price gouging.

Collins has, in fact, received contributions from both sources.

Jonathan Sackler, former vice president and son of the former head of Purdue Pharmaceuticals, gave Collins $2,300 in 2007, just two months before Purdue agreed to pay $600 million in fines for misleading regulators, doctors, and patients about the addictive nature of OxyContin, its version of the painkiller oxycodone.

The constituent with whom Collins was speaking, Amy Halsted, knew all of this. She serves as co-director of the Maine People’s Alliance (of which the Maine Beacon is a project) and has worked extensively on issues related to the opioid crisis and pharmaceutical price gouging.

“I got this random chance of being upgraded to first class and being seated next to someone Mainers have been pleading to talk with and answer their questions and I felt the weight of that. I knew I had to ask her something,” said Halsted, who recorded a video of her conversation with Collins on her phone as they talked just after their airplane had landed at Reagan National Airport. “A lot of people in my family in Maine and friends and lots of Mainers, as I’m sure you know, are really struggling with the costs [of insulin],” Halsted told Collins after asking the senator she could ask her a question. “I felt a little disappointed that your campaign has taken money from Eli Lilly and I wanted to ask you if you’d consider giving it back.”

Collins at first denied taking money from the pharmaceutical company, but later admitted that she may have received contributions from their PAC.

“The other thing I’ve read is that your campaign has taken money from the Sacklers, who have been pushing the opioid epidemic,” Halsted pressed.

“Never. No, no. So, I think you should check your sources.”

Collins said that even if she had received contributions (which she did), she wouldn’t be returning them or giving the money to charity.

“I’m not influenced by the contributions that my campaign receives,” said Collins.

Halsted, who has family members who have struggled with addiction and diabetes, said she was “dumbfounded” by Collins’ “flat-out denial of facts.”

In Maine, more than 2,000 people have died of drug overdoses since 2007. Last June, Maine joined a lawsuit with 40 other states against Purdue and members of the Sackler family, including Jonathan Sackler, alleging that they deceptively marketed opioid drugs, fostering the epidemic. 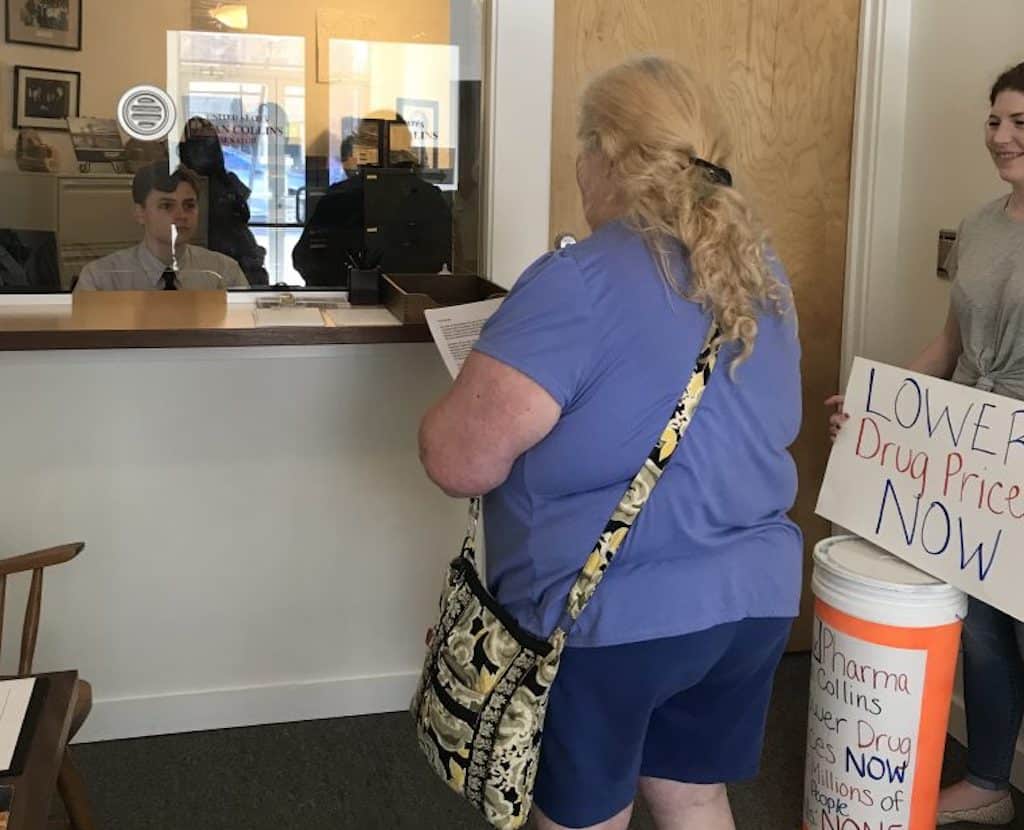 Patty Kidder of Springvale visits Sen. Collins’ Biddeford office in August, 2019 to tell a staffer she is often unable to afford her prescription drugs. | Beacon photo

In 2018, Collins, a member of the Senate Health Committee, voted against an amendment to the Opioid Crisis Response Act that would have imposed retroactive fines on companies and executives that illegally marketed or distributed opioids and established penalties for future illegal activity.

Eli Lilly is also embroiled in litigation. Diabetics have joined a class action lawsuit alleging deceptive practices by the pharmaceutical giant as insulin costs have skyrocketed. One quarter of insulin users report that they now have to ration their use of the drug.

In her conversation with Halsted, Collins cited her support for a bill to create incentives for insulin manufacturers to reduce product prices to their 2006 costs, but advocates for diabetics have called that approach “smoke and mirrors,” instead advocating for legislation allowing Medicare to use its purchasing power to bargain down prices and levy penalties against drug profiteers.

“It’s a half measure, typical from Susan Collins,” Rosemary Enobakhare, director of Affordable Insulin NOW, told Beacon. “It makes it look like she’s doing something, when in all actuality, she’s not. It’s a Band-Aid on a gunshot wound.”

“What we do know is that Susan Collins has taken $400,000 over her career from pharmaceutical companies. It just paints a very clear picture, who she’s for, and who she’s not for.”

Perhaps in an effort to head off criticism of these contributions and positions, Collins has made drug prices and the opioid crisis centerpieces of her re-election campaign. She is currently airing TV commercials touching on both issues.

Recognition of her vulnerability in these areas may be why Collins chose to lie about taking these specific pharmaceutical contributions, but if voters make the connection between the money she has received and her actions in Congress, her refusal to acknowledge and return them may end up costing her far more than the thousands of dollars she has received.

First published by the Maine Beacon, a project of the Maine People's Alliance