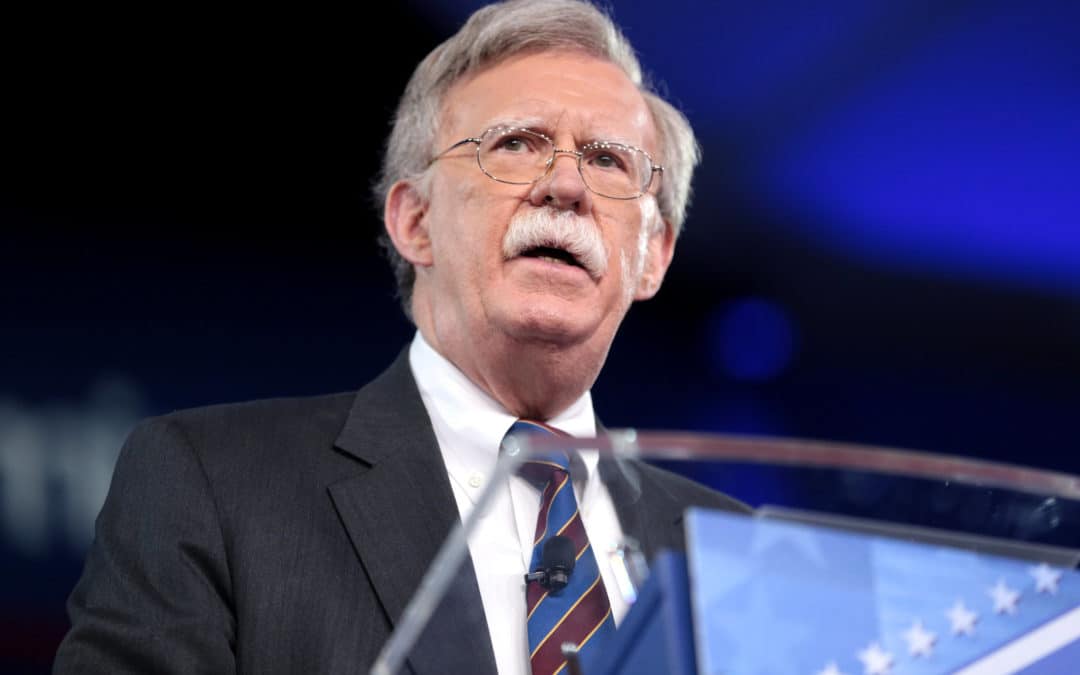 Democrats seem thrilled that John Bolton - a leading neoconservative, an advocate of bombing Iran and North Korea, and, briefly, Trump’s National Security advisor - has said he would testify at Senate impeachment hearings, if subpoenaed. They seem to hope Bolton will be another John Dean, who, during the Senate Watergate Committee hearings, provided explosive testimony that ultimately helped lead to the downfall and resignation of President Richard Nixon.

Don’t count on it.

Is it just a coincidence, that after resisting calls to testify in the House impeachment hearings, Bolton announced his willingness to testify in the Senate impeachment trial of Donald Trump only days after Trump ordered the assassination of Iran's top military commander, Quasem Soleimani? Would Bolton, a leading advocate of bombing Iran, suddenly decide to help bring Trump down, at the very moment when Trump is taking action that could lead to the fulfillment of Bolton’s greatest aspiration, a regime-change war with Iran?

And with the latest reports of Iran retaliating against U.S. bases in Iraq with ballistic missiles, Bolton is probably jumping for joy that the U.S. and Iran are on the brink of war.

Don’t forget who John Bolton is. For decades, he’s been one of the leading advocates of preemptive American military action around the world. As George W. Bush’s Undersecretary of State, he was one of the strongest advocates for the Iraq War, falsely declaring, “We are confident that Saddam Hussein has hidden weapons of mass destruction and production facilities in Iraq.”

Long after no WMDs were found and the Iraq War killed tens of thousands of innocent people, cost U.S. taxpayers over $1 trillion, and increased chaos and instability in the Middle East, Bolton still defended the Iraq invasion, telling the Washington Examiner, "I still think the decision to overthrow Saddam was correct.”

There’s hardly an international crisis for which Bolton doesn’t advocate pre-emptive war. Writing in Rupert Murdoch’s Wall Street Journal, he advocated a pre-emptive strike on Korea that could easily have precipitated a nuclear war. He opposes a two-state solution between Israel and the Palestinians. And he advocated tearing up the Iran nuclear treaty and bombing Iran.

Bolton has also been a long-time advocate of confrontation with Russia. But his willingness to serve as Putin-puppet-Trump’s National Security Advisor indicates that Bolton is also a bit of an opportunist. According to Politico,

Bolton has echoed Trump’s charges that Obama officials politicized intelligence to smear Trump as a tool of the Kremlin. In one late 2016 Fox News interview, Bolton even suggested that the hacking of Democratic emails may have been a ‘false flag’ operation staged by the Obama administration.

This is a guy who spent the entirety of his bullying, boot-licking career constantly working the levers of the national security apparatus towards waging war — any war, with whatever country was at hand to target, be it Iraq, Iran, North Korea, Cuba, or Venezuela, whose government he tried to have overthrown earlier this year, in a blackly comic show of American ineptitude that would be too much for the Coen brothers.

So do Democrats really think this is the guy who’s suddenly going to turn around and bring down Trump?

There’s little doubt that Bolton, a Russia hawk, was unhappy with Trump withholding aid to Ukraine. The New York Times reports that in August, Bolton attended an oval office meeting where he unsuccessfully tried to convince Trump that releasing the aid was in the interests of the U.S., but was rebuffed by Trump, who simply said he wasn’t ready to release the aid. And Bolton was frustrated by the continuous interference of Trump's personal lawyer, Rudy Giuliani, calling him a “hand grenade.”

But according to public testimony, Bolton’s main response to Trump’s withholding of aid to Ukraine has been to distance himself from the enterprise and cover his butt. For example, he directed aide Fiona Hill to notify the NSA’s chief lawyer of efforts by Gordon Sondland and Mick Mulvaney to push Ukraine to open investigations. As Hill testified, “the specific instruction was that I had to go to the lawyers, to John Eisenberg, our senior counsel…to basically say, you tell Eisenberg, Ambassador Bolton told me that I am not part of this." Bill Taylor, the top U.S. diplomat stationed in Ukraine, testified that when he met with Bolton to express his concerns, Bolton recommended he relay his concerns to Secretary of State Pompeo instead.

With Bolton distancing himself from the Ukrainian disaster, how likely is it that he will give smoking gun testimony that Trump committed a crime?  As The Washington Post reports, “People close to him note that Bolton has an expansive view of Presidential power. As a result, it is unclear whether he would testify that he believes Trump overstepped his authority in his dealings with Ukraine.”

The Post goes on to report that Bolton “wants a future in Republican politics and does not want to be seen as someone who is trying to ingratiate himself to the president’s critics.” Mark Goombridge, a former Bolton aide, told The Post, “Bolton is still a dyed in the wool Republican. He is not going to do anything to help Dems… I fully predict that Bolton will go to great lengths to provide cover to Trump.”

Wake up, Democrats. Stop expecting help from Bolton and his neocon kin, whom the “liberal” media like MSNBC and The Washington Post have been offering a platform.

Imagine if another country had a guy like Bolton, whose whole schtick was going around the world threatening heads of state with ouster or death. The press wouldn’t call him a hawk, they’d call him a madman and an international criminal.