The New Know-Nothings And Why We Must Impeach 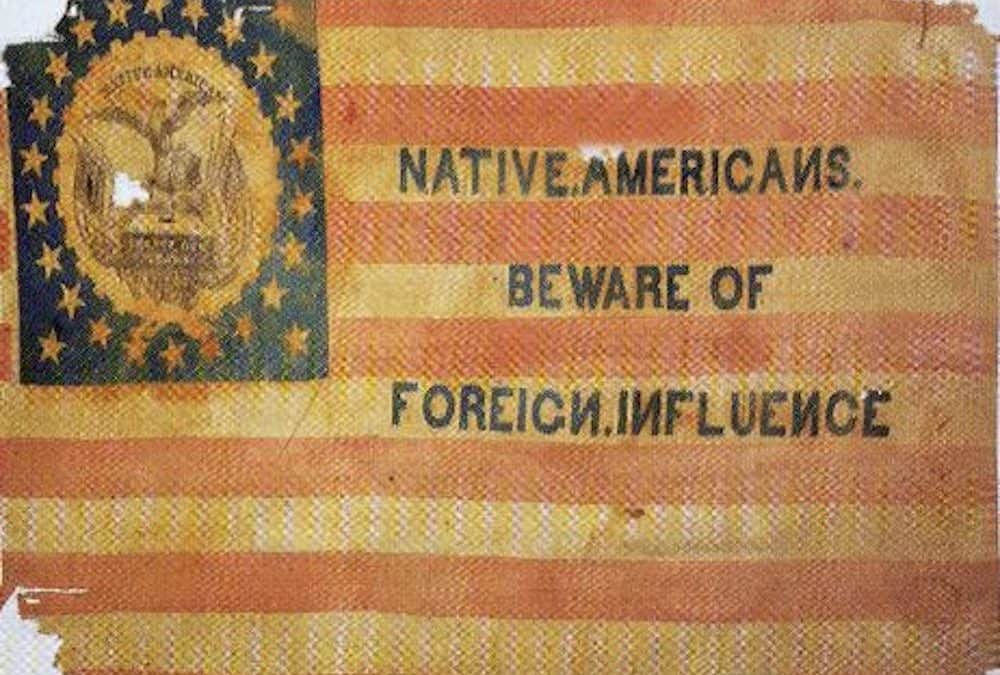 Trump’s America feels more and more like the 1850s, when our country’s violent anti-immigrant movement was born. Anti-Catholic mobs, alarmed by a rapid influx of poor immigrants from Germany, Ireland and Italy, burned churches and killed Catholics in Philadelphia and other cities.

In 1849, these “Nativists” formed the Order of the Star Spangled Banner, whose members vehemently opposed immigration, sometimes with violence, and who were sworn to secrecy. When outsiders asked about their activities, members would say they “knew nothing.” By 1854, they were a political party, controlling several state legislatures and 100 seats in Congress, and seemed poised to sieze the presidency.

In one of many ironies, today’s Know-Nothings –Mike Pompeo, Mick Mulvaney, Mike Pence and Stephen Miller – are all descended from once-reviled immigrants. And while their forebears denounced “foreign influence” in American politics, these new Know-Nothings embrace it.

And a few modern Know-Nothings – like Steve Bannon and Attorney General William Barr – imagine themselves the heroes of a conservative Catholic crusade to save Western civilization. This distorted faith is diametrically opposed to the one espoused by Pope Francis, who advocates for the human rights of migrants and says those who want to keep them out “will end up becoming prisoners of the walls they build.”

Our Know-Nothings, like their forebears, swear they have no knowledge of threats or crimes committed to enhance their power, as when President Donald Trump invited foreign powers to intervene in our elections in 2016. And in 2019, as soon as Trump and his cronies felt confident they had escaped the consequences of that choice, they broke the law again to try and ensure his reelection.

This Know-Nothing attitude has now crystallized in the Republican Party’s lockstep defense of the president as he faces trial for two articles of impeachment. Abuse of power? It’s the will of the people, they say. Obstruction of justice? We make our own rules, they say.

The most assertive proponent of this Know-Nothing defense is Rep. Doug Collins of Georgia, the top Republican on the House Judiciary Committee.

“You can’t make your case against the president because nothing happened,” Collins has said, simply denying the mountain of evidence that President Trump sought foreign interference in U.S. elections.

On the obstruction charge, Collins says Trump’s efforts to block testimony by Mulvaney, Pompeo and others with firsthand knowledge of his extortion campaign is not only justified, it’s commendable. The framers of the constitution, he argues, intended the Executive to be in constant tension with the Legislative branch, so by obstructing justice, Trump is simply fulfilling their wishes.

Collins acts as if impeachment is a grand joke, but the stakes could not be higher for him or the Republican Party. Republicans have abandoned every pretense of principle in their bid to remain relevant to Trump’s populist base.

Republicans have embraced this role as our new Know-Nothing Party, appealing only to Nativism, in the name of a glorious past that never was.

And the stakes have never been higher for those of us who wish to see our republic endure. That is why impeachment is now our only choice and an imperative, and why we must support lawmakers as they make this historic choice.

On Tuesday at 5:30 p.m. local time, People’s Action members will take to the streets with other activists in Washington, D.C. and all 50 states to demand impeachment, and support House lawmakers as they prepare to vote. More than 600 events are planned around the country, to send a clear message to wavering lawmakers that No One Is Above The Law.

As swiftly as the Know-Nothings of the 1850s rose to power, their movement collapsed. Two years after their legislative victories in 1854, the party failed to advance a presidential candidate, in part because Southern Know-Nothings sought to use the party’s popularity to promote slavery, as support for it was rapidly receding in the North.

“When the Know-Nothings get control, it will read 'all men are created equals, except negroes and foreigners and Catholics,' Abraham Lincoln wrote to a friend in 1855. “When it comes to that I should prefer emigrating to some country where they make no pretense of loving liberty—to Russia, for instance, where despotism can be taken pure, and without the base alloy of hypocrisy.”

While we can take comfort in the collapse of the original Know-Nothings, we would do well to learn from their dangerous rise . They failed in their bid to achieve national power, but the spark of hatred they lit led to the Civil War.

Our new Know-Nothings have not only achieved national power, they wish to consolidate it, whether or not Trump survives impeachment. And we have a president who proudly claims his removal from office could spark a second Civil War and urges his followers to take up arms. He’s not kidding.

The stakes for our democracy have never been higher. Join us to demand that our republic be restored, that lawmakers choose the path of courage, and vote for impeachment now.

Join one of the more than 600 "Nobody Is Above The Law" events around the country on Tuesday, December 17 at 5:30 p.m. local time.