Mayor Pete, Get Big Money Out Of Your Campaign 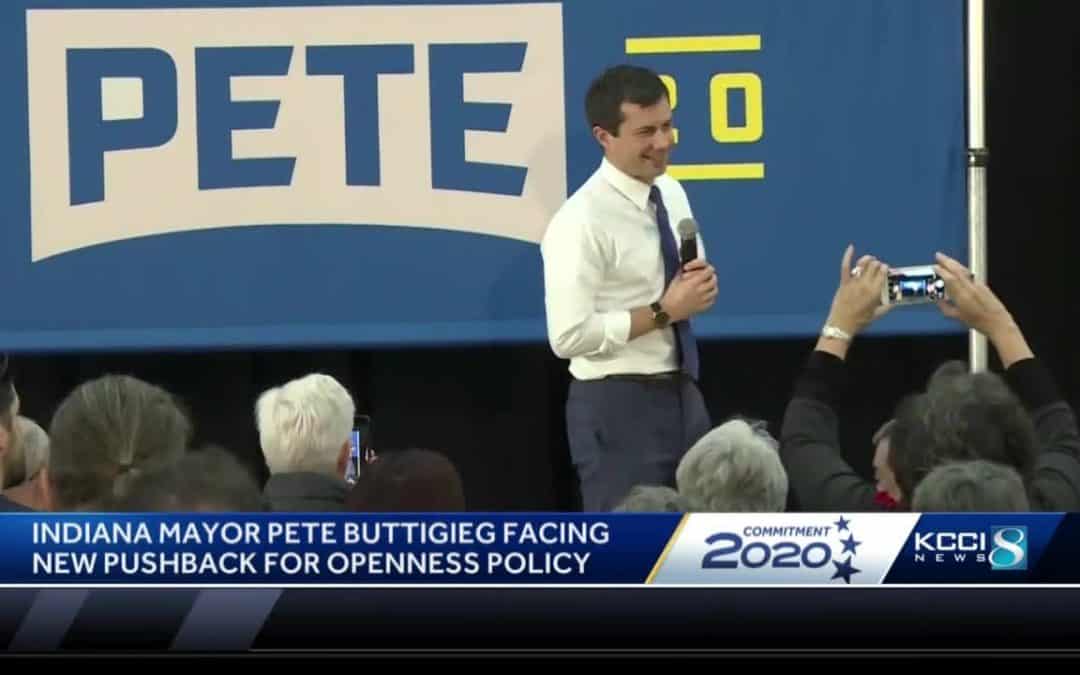 What will it take to get big money out of politics? As a voter and a student, that’s what I want to know from any candidate who wants my vote, so I asked Mayor Pete Buttigieg this when he visited our campus – Cornell College in Mount Vernon, Iowa – this weekend. Here’s what he had to say.

@PeteButtigieg said he wants to "take big money out of politics." We at @IAStudentAction asked him if that includes not taking money from billionaires and closed-door fundraisers, he said "NO." Well, then what counts as "big money" then Pete? pic.twitter.com/pIKkq3hBES

We see a lot of candidates, because the Iowa Caucus in February will be the first vote of the 2020 presidential election.  But it’s rare to see them all the way out in Mount Vernon, which is a small town of around four thousand, including students, in the eastern part of the state. So when I heard Mayor Pete was coming to our school, I wanted to be there.

Presidential hopefuls know many Iowa students will vote in the caucus.  I know I will. We played a decisive role in the 2016 elections, and we’ll do it again in 2020.

I’d heard plenty from Mayor Pete, mostly in TV ads – he’s spent a ton of cash in Iowa, trying to stand out from the crowded field of candidates. “We need a new president, one who can really unify progressive voters,” is the kind of thing we hear him say.

But in these ads, he also attacks Democrats who support Medicare For All and Free College For All. That irks me. These are things I know firsthand our country needs, and students like me desperately need – now.

I’m a member of Iowa Student Action, part of the People’s Action family of grassroots groups. I joined ISA when I realized how many of my fellow students hit a wall when they try to get through four years of college because of the cost. They max out their student loans, scholarships and campus jobs, and still can’t afford to pay.  I have a friend who tried selling his plasma to stay in school, but has to drop out because it wasn’t enough. That’s not right.

Pete says he wants to make college debt-free for working and middle-class students, but he wants to rely on programs for debt forgiveness that are already on the books, but aren’t working for millions of people. We’ve already seen, with health care, how investors seek out and exploit any gap in our public system for their own profit, so this approach doesn’t persuade me. And when Pete attacks Free College For All, he's attacking my friends, and working students of color.

In his ads, Mayor Pete also repeats rightwing talking points – like when he calls Free College “unwinnable,” and says Medicare For All infringes on consumers’ “right to choose” a health insurance provider. What about everyone who’s shut out of hospitals and higher education because they can’t afford it? Mayor Pete isn’t saying much about their rights. I don’t know if he realizes how he plays into the GOP’s hands when he talks like this, but he does.

And how, we might ask, does Mayor Pete pay for these ads? He’s not telling, at least not yet. Until now he’s kept a tight grip on his lists of campaign contributors. But we know he’s been holding closed-door fundraisers with deep-pocketed donors, has hired Wall Street bankers as key staffers on his campaign, and others on recommendations from billionaires like Mark and Priscilla Zuckerberg.

Sure enough, on Saturday at Cornell Mayor Pete stuck close to his favorite, folksy themes: he spent a lot of time calling himself a progressive, and the only candidate who can unify the Democratic party.

But what really got to me was when he told us, “I’m going to get money out of politics.”  Really, Mayor Pete? Coming from you? That sounds a lot like “Drain the Swamp.” And we know how that turned out.

So after his stump speech, I stood in line to shake his hand, so I could ask him myself:

“Does getting big money out of politics mean not taking money off billionaires and closed-door fundraisers?

Mayor Pete is a polite Midwesterner, so he was all smiles when he told me this. But his answer couldn’t have been more clear.

Thing is, Mayor Pete’s response to this question struck a nerve. My friend Max made a video of our exchange, and it’s already been viewed more than 3.1 million times, and has been shared by The Hill, The Independent, Newsweek, NowThis and other outlets.

Why? Because voters like me care. A lot. We want candidates like Mayor Pete to be accountable to us, not billionaires. And we don’t want to vote for anyone who says one thing in public and something else behind closed doors.

We must have struck a nerve, too – because on Monday, the Buttigieg campaign did an about-face and agreed to release – for the first time – some of its donor records, and to allow press into his fundraisers. And he’s finally released some information about his work as a corporate consultant, too.

Transparency is good, and we’re glad Mayor Pete has come around to having more of it in his campaign. But responding to voters is better, so what he really needs to do is take down his misleading ads in Iowa, and stand with the candidates who support Free College For All.

So I, along with my fellow members of Iowa Student Action, the Iowa Citizens for Community Improvement Action Fund and People’s Action, will continue to demand transparency from Mayor Pete and every candidate we meet from now until Election Day. Because anyone who wants my vote will have to earn it.

Greg Chung is a student and registered voter at Cornell College in Mount Vernon, Iowa. He is a member of Iowa Student Action, part of the People's Action network of grassroots groups, and helps organize his campus to be more welcoming to poor and low-income students.