Warren Won't Back Down On Medicare For All 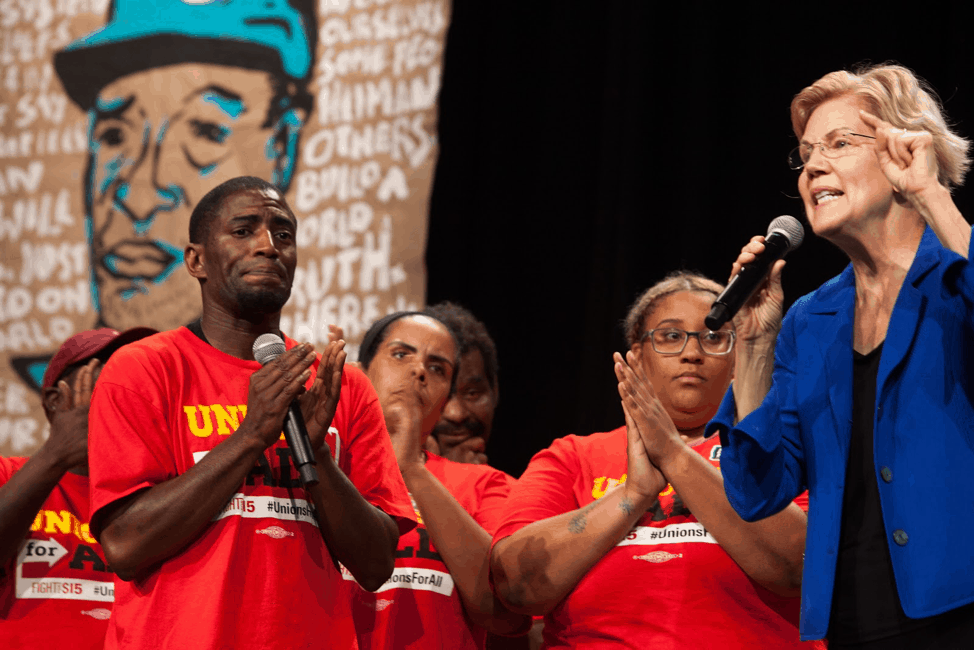 When Elizabeth Warren was criticized for not detailing how she would pay for Medicare for All, most pundits assumed she would duck and cover. M4A is Bernie Sanders’s signature legislation, but the establishment dismisses him as a movement candidate. Warren, on the other hand, is seen as a “serious, in the weeds” policy wonk who wants to win and has run a disciplined and impressive campaign that is rising in the polls. Surely, she would back away from her statement that “I’m with Bernie on Medicare for All,” and emphasize the “aspirational nature” of the commitment.

Warren has since issued a detailed plan on what Medicare for All would cover, and how she would pay for it without raising taxes on working people. She summarized the compelling human benefits of making health care a right, not a privilege rationed by cost. She outlined the massive savings that would result from eliminating the insurance company profits and exorbitant administrative fees of the current system. Half of the remaining cost could be covered by requiring large companies to pay to the government a little less of what they pay now to cover employees’ health care. The remainder would come largely from taxes on corporations and the wealthy, notably a 3 percent surcharge on fortunes over $1 billion. Workers could pocket the savings on co-pays and premiums, in what would effectively amount, she noted, to the largest middle-class tax cut in history.

Warren then doubled down, calling out the naysayers like Joe Biden, Pete Buttigieg, and Amy Klobuchar who had railed against her for not laying out how she would pay for her plan.

“Every candidate who opposes my long-term goal of Medicare for All should put forward their own plan to cover everyone, without costing the country anything more in health care spending, and while putting $11 trillion back in the pockets of the American people,” she wrote. “If they are unwilling to do that, they should concede that they think it’s more important to protect the eye-popping profits of private insurers and drug companies and the immense fortunes of the top 1 percent and giant corporations.”

The political establishment was aghast. The Washington Post unleashed a blizzard of articles decrying Warren’s audacity, picking apart her assumptions, her math, and her political judgement. Former Treasury secretary Larry Summers was trotted out to declare that he could “easily imagine supporting a well-designed Medicare-for-all plan” before detailing the horrors that would ensure from taxing wealth and disrupting the current system. Rahm Emanuel characteristically claimed a badge of courage for dismissing Medicare for All as a pipe dream. Buttigieg and Biden scorned Warren’s cost estimates, with Biden saying she was “just making it up. There is no way.” Some on the left chimed in, criticizing her choice of taxes and worrying whether her repeated use of the phrase “my long-term goal of Medicare for All” presaged a later retreat.

Despite the carping, one thing is clear: Warren has joined Sanders in forceful support of Medicare for All. As with the Green New Deal, two of the three leading candidates in the Democratic presidential primaries will argue the case. The others will have to put up or shut up—Warren’s gauntlet will force discussion of the spiraling costs, and human toll of the current system. Buttigieg, who went after Warren for not detailing her plan, will now be pressed to come up with more than platitudes to describe how his plan can fulfill his promise to sustain private insurance companies, pay for a public option, provide everyone affordable care, and somehow cost dramatically less than Medicare for All.

The debate over Medicare for All illustrates the fundamental choice that Democrats will make in the coming primaries. Are they satisfied with a candidate who promises restoration, or do they want a champion of fundamental change? For the Democratic establishment, beating Trump is enough. As Representative Tim Ryan, who recently dropped out of the race, put it, “We just want to beat Trump. That’s the revolution. Beating Trump.”

Sanders and Warren insist Trump is the symptom, not the cause, of our discontent. The rules were rigged long before he came to office. Fundamental threats—from corrupting inequality to the climate emergency to a cruel and wasteful health care system—need to be addressed. They seek a mandate for real change, not simply a campaign to get rid of Trump.

The argument will turn less on the merits of the ideas or the needs of the country than on the question of what will win. Despite a lackluster campaign, Biden remains a leader in the polls not just for name recognition but because of the sense that he might be the safest bet to beat Trump. Buttigieg and Klobuchar, potential rivals to the leading three, pitch their appeal almost entirely on claims of what is needed to win.

Trump, the most unpopular president in the history of modern polling, sustains the support of about 45 percent of the country. What best consolidates the majority against him?

Among the Beltway set, the growing consensus is that Democrats should “seize the center,” and beware of moving too far left. This is in part grounded in the quaint belief that Hillary Clinton lost to Trump in 2016 because, as the normally thoughtful conservative columnist Ralph Douthat wrote in The New York Times, she “adjured her husband’s popular legacy of centrism,” making Trump the “moderate candidate in the race.”

The growing progressive wing of the party, in contrast, attributes Clinton’s loss in large part to her being the personification of a compromised establishment that had failed working people. Trump won because the pussy-grabbing, duplicitous, shady businessman and reality-TV star made himself into the voice of populist change. In office, Trump has failed the very voters he conned in 2016. Democrats win by seizing what Martin Luther King called the “moral center,” championing bold reforms that address real challenges that the people and the country face.

Medicare for All epitomizes this debate. Most Democrats would agree that that’s how they’d structure a health care system if we could start from scratch, but, the conservative caucus of Biden, Buttigieg, and Klobuchar argues that we can’t get there from here. We can’t sell a plan that would take away the employer-based health insurance that 150 million Americans have. Piecemeal reform—a public option, prescription drug reform—is the best we can do.

That, of course, does little to get prices under control, or to protect Americans from facing bankruptcy simply because they get sick. Medicare for All gives everyone the right to keep their doctor for as long as they want, and to get health care without struggling with co-pays, premiums, or coverage limitations. And it saves people money.

The best polling shows the public is open to but wary of dramatic change. People are most fearful of soaring costs. They care less about keeping their insurance plan than about keeping their doctors. Medicare for All enjoys majority support on first impression. Right-wing arguments about taxes and socialized medicine raise significant doubts. Credible reassurance about savings, and about the right to keep your doctor revive its popularity. The debate will tell.

This debate won’t be waged simply on the merits. The insurance companies and prescription drug companies are mobilizing multimillion-dollar campaigns to protect their profits. Not surprisingly, Buttigieg, the leading critic of Sanders and Warren for Medicare for all, has pocketed the second-most donations from the health care industry, trailing only Trump. Warren and Sanders will face a blizzard of ads designed to scare off voters.

Despite Hillary Clinton’s ill-fated 2016 campaign, the Democratic establishment remains convinced that the best chance to beat Trump is to run a centrist candidate who can appeal to swing voters turned off by Trump’s antics. Progressives argue that there is a broad majority coalition that will rally around a candidate promising fundamental reforms. What’s clear now is that Sanders and Warren will ensure that Democratic voters will have that choice.

First published in The Nation. Robert Borosage is a leading progressive writer and activist. All views expressed are his own.