Migrants Are Iowans, And We Stand With Them 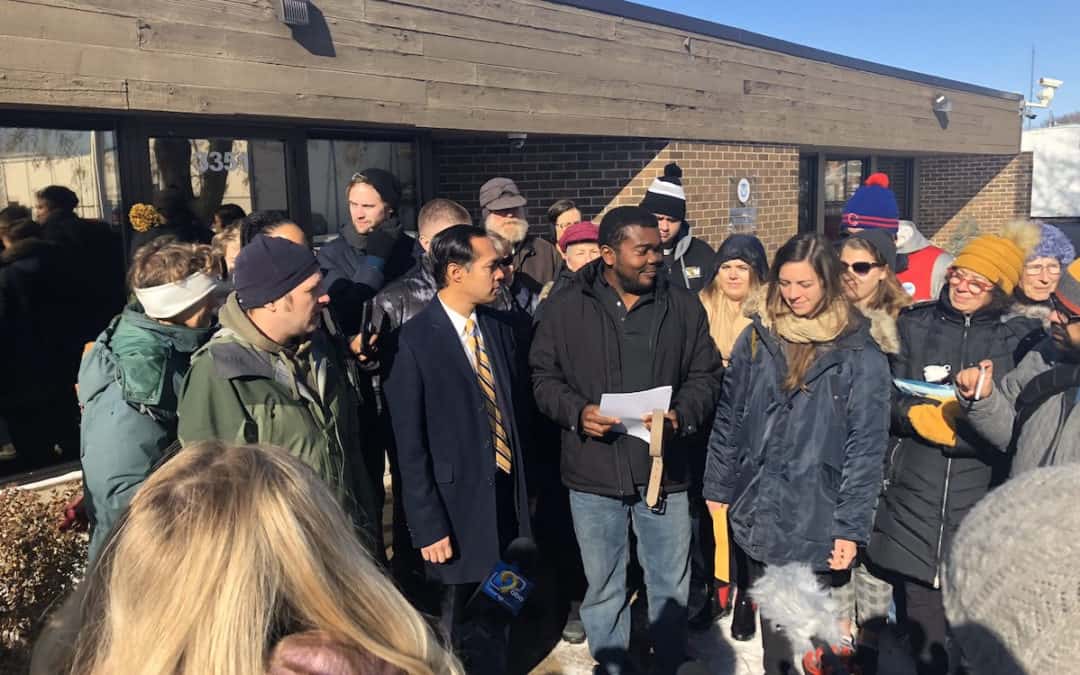 How it would feel to walk fifty days to save your unborn child, only to be locked in a cell so cramped you and a dozen other pregnant women had to sleep standing up?

WATCH: the full story of @JulianCastro escorting José Robinson to his ICE check-in.

“If I didn’t have this support today, I think I’d still be inside. God bless you all.” pic.twitter.com/fsoFDeQUoT

That’s what our government forced Juliza Aguilar de Cortez to do. She fled El Salvador with her husband Alejandro to escape death threats, hoping to find safety in the United States. Against all odds, they reached the U.S. border, but Juliza was detained, and Border Patrol turned Alejandro away, when they refused to recognize their marriage.

Alejandro is now stuck in Juarez, Mexico, where he’s since been kidnapped by drug cartels and robbed by Federal Police. He’s been waiting for months at the border in the hope of one day seeing his wife and now-newborn child, Anderson. 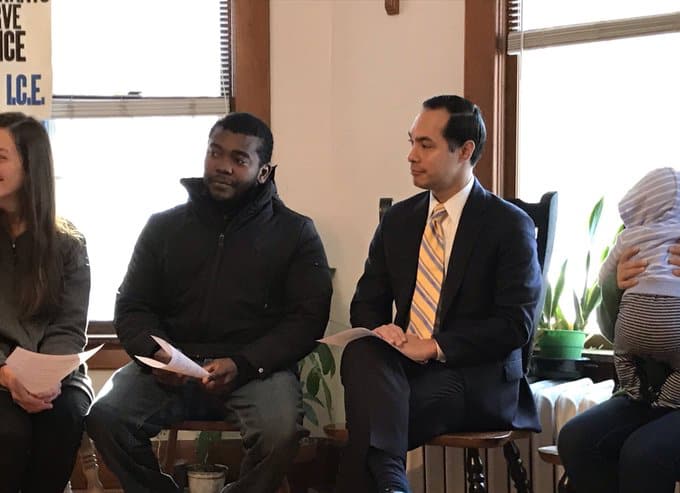 To his fellow migrants and to all of us at Iowa CCI, Jose Robinson Palacios is a hero. That’s because he saved the lives of dozens of children on his trek north, carrying them one by one across the river that separates Guatemala from Mexico. These include Isaac, an eleven-year-old epileptic, the son of Heybi Jacqueline Torres Toro.

Juliza, Jose and Jacqueline are just three of the many asylum seekers who have found a safe haven and welcome in Iowa City, at the Catholic Worker House. Emily Sinnwell and David Goodner, who help run the house, would probably say it’s the grace of God that brought them there, but we know Emily and David played a big part in that. Since our government started persecuting refugees, they’ve been traveling to the border to pay bonds and offer sanctuary for migrants in Iowa City.

At Iowa Citizens for Community Improvement, we have a broad mission to put people before profits, and go where we see a need. In the lives of these refugees, we saw our ability to make a difference - so we’ve joined forces with the Catholic Worker House to try and protect them.

Iowa is an early-voting state, and in September we organized a people’s forum with presidential candidates. We arranged for Juliza, Jose and Jacqueline to meet with Senator Bernie Sanders and Former HUD Secretary Julián Castro. Both pledged publicly to use their power to support the refugees in Iowa City and to uplift their cases. We also urged our Representative in Congress, David Loebsack, to support their cause.

This Tuesday, Secretary Castro made good on his promise – he returned to Iowa, and went with Jose and two dozen of us to Jose’s mandatory check-in at the ICE office in Cedar Rapids. Jose, who had a letter of support with him from Loebsack, went inside with Castro and Emily as a translator. The rest of us waited outside, in prayer. 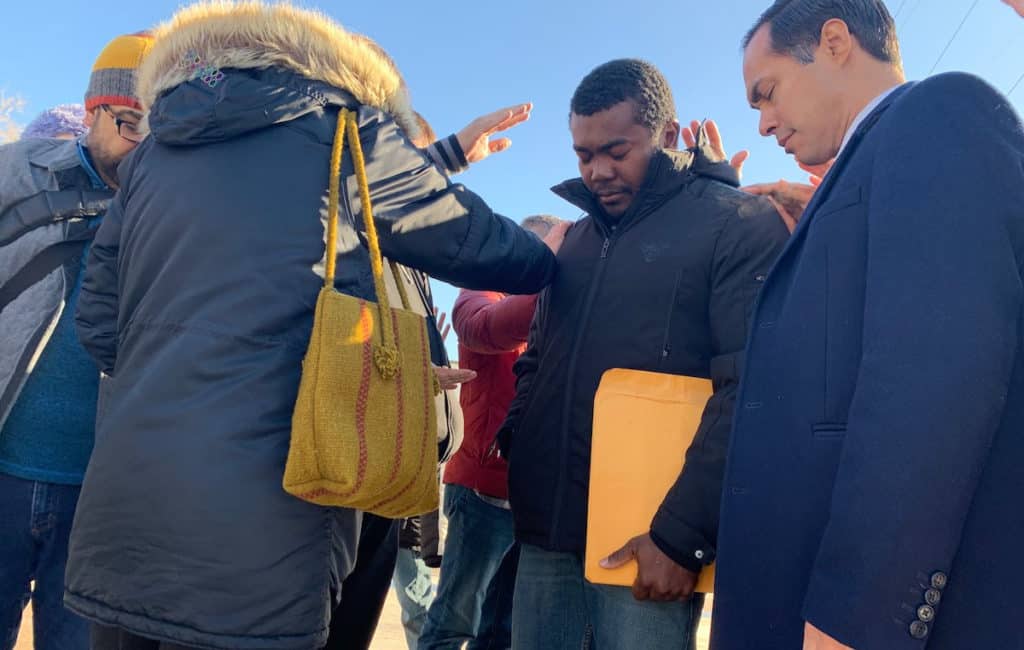 Jose faces a Removal Order, but his deportation has been stayed pending a ruling by the Board of Immigration Appeals on his request for asylum.  He has been forced to wear an ankle bracelet 24 hours a day, which is both humiliating and painful.

Many migrants – including the husbands of Modesta and Nancy, two women currently at the Catholic Worker House – have been deported after appearing for routine check-ins with ICE. ICE has been detaining and deporting at will, even when there are no legal grounds to do so. So we were worried for Jose, knowing that deportation at this time would be a death sentence.

Castro demanded that ICE take the ankle bracelet off Jose's leg. They accepted that demand, and when Jose emerged from the check-in, he proudly showed us his unchained ankle.

For me as an Iowan, it means a lot to stand with Jose and other migrants. I think states like Iowa in the Midwest are often used by demagogues like Trump to say, “No, the country’s with me – they don’t want immigrants.” White supremacists try to “other” our immigrant community, to separate our Latinx and other immigrants from their white neighbors. I think it’s very clear that we stand united, and we say folks like Jose are not an “other.”

The message is clear. This is one of several moral crises in Iowa and for our country right now. And if candidates want our votes, and to lead our country, they need to take action on, need to be leaders on these issues.

We thank Secretary Castro for following through on his promise. For Iowa CCI and myself, we view members of our community like Jose, Juliza and Jacqueline as part of our family. So to not show up for them is to accept our family members’ death. And we can't do that. 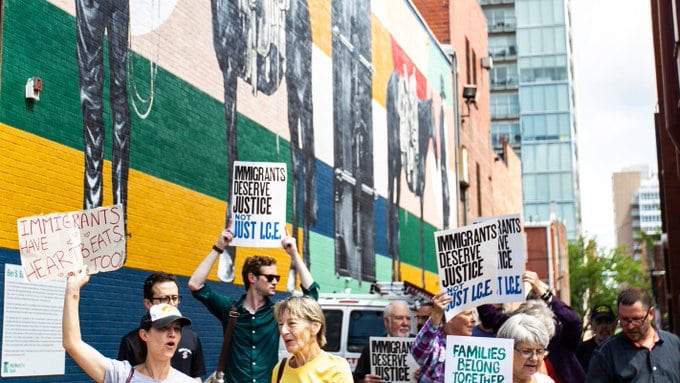 Together with the Iowa City Catholic Worker House and other community groups, Iowa CCI calls for 2020 to be a Year Of Action To Protect Immigrants And Children - in Iowa, and everywhere. We will continue to provide support for migrants at ICE check-ins. And in November, we’ll travel to the southern border with Juliza so Anderson can meet his father for the first time.

Jose is not just a refugee, or an immigrant: he’s an Iowan. He’s a member of our community, and we’re going to fight for him to have every right that we have. Because if we leave anybody out, then we’re never going to get where we want to go.