We Can Create The World We Want To Live In 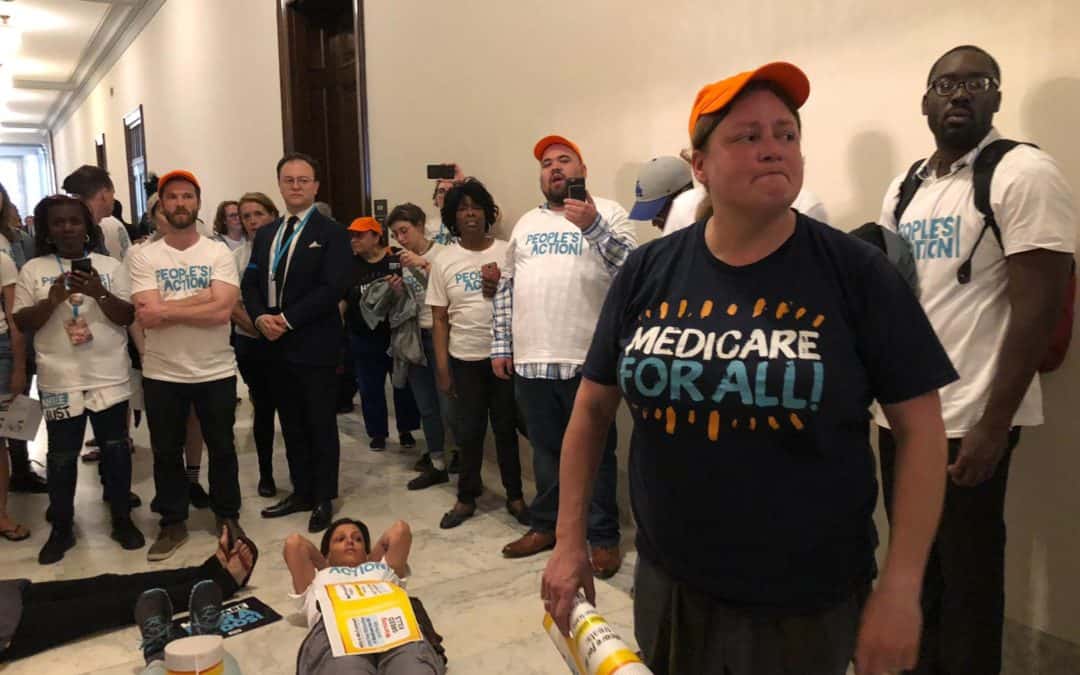 People's Action congratulates Adrienne Evans, executive director of United Vision for Idaho, on receiving a 2020 Roddenberry Fellowship. The program, whose alumni include Alicia Garza, Michael White and Judith LeBlanc, seeks to empower activists to “think, question, and challenge the status quo” with the intention of creating “a brighter future." OurFuture's Tim Wilkins sat down with Adrienne to learn more about her life and how this grant will impact her work.

First of all, congratulations! Tell us a bit about your life, and how you became an activist.

I grew up poor on a goat farm in Parma, a small town in southwest Idaho. We rarely knew if we’d have enough for winter coats, or groceries.

What was good about growing up on a farm was that there's a real connection to the land, animals and the life of farming, and really being off the grid. The way you are sustained is by what you put into the ground, at the roots.

What was bad is the education system was incredibly poor, and it really was ethnically not diverse. And it was such a polarized, racist atmosphere, I never found myself fitting in anywhere.

My dad was white, from Idaho, and mom was half Yaqui Indian from Oregon. She faced a lot of deep prejudice, even within our family. I saw all of that with the perspective of a child, and the unfairness of it had a deep impact on me.

I’ve always been deeply political. The first rally I spoke at was as a young teen, when Idaho’s legislature passed the most restrictive abortion bill in the nation. We rallied on the steps of the state Capitol in Boise, and left behind 10,000 pounds of potatoes to remind our governor that we might call for a national boycott. He vetoed the bill.

After I studied sociology, I found United Vision for Idaho and the People's Action network, and got to work. I could have left Idaho, but wanted to stay and fight in the places and spaces where advocacy is most needed, and rise to that challenge.

Right after the financial crisis in 2008, I went out to organize around progressive tax policy in some of the most conservative little towns in Idaho. My car was always the only one in the lot without a gun rack!

I’ll never forget one conversation I had in a little bar in Hagerman, about two hours east of where I grew up. I would start by saying, you know, “I just want to talk to you about some of these policies,” and immediately you’re met with resistance.

So I said, “Hold on a second. Let me just ask you some simple questions. What do you think about the concept that we all start out from the same place? Now we won’t all end up in the same place, but at least some of us won't be advantaged or disadvantaged from the start.”

And the whole mood in the room changed. People said, “God damn, that sounds like a great idea! Isn’t that what America is?”

So I found pretty quickly that I could have these conversations with people, as long as I wasn’t calling it by a name, right? If we didn't say these are Democratic issues or Republican issues, that just opened the door to a new way of talking with people.

How are these conversations going to happen? How are we actually going to move people? It's not by going in with our rhetoric, or with a moral authority and saying I'm right. It's really getting people to see a different future than the one that they're in.

That experience really inspired me, and inspires a lot of the work that we’ve done since then.

How has your involvement with People’s Action enriched your work?

In 2016, I came back from the People’s Action founding convention in Washington, D.C., and really wanted to put the RiseUp Platform into action in Idaho. So we went out and knocked on 24,000 doors all across the state, and held meetings in rural communities.

We asked people, “What works on this list, and what doesn't? What needs to be on here that isn't?” And we customized the platform to Idaho.

The People’s Action platform is really amazing, because everybody can find themselves in it. What I was astounded by was that basically nothing on that platform got changed, but things got added.

When we would go in to places that had been completely written off, where nobody has had conversations with these folks, they would tell us that these are their issues. If we didn't call them Democratic or Republican, we could have the conversations.

We want to hold both parties accountable. I’ll never forget being in these spaces, and people saying, “What are you talking about? Politics aren’t about a platform, it’s about a candidate or a party.” Yeah, I get that that’s how it’s been - but that’s not the way it’s supposed to be. And we’re here talking to you because we’re showing up in this moment to hold them all accountable - to you. And we’re filling a space that has not been filled.

People have not felt that kind of advocacy. And they want to; people are really hopeful and they want to be involved, but they're just given no choices. On the doors I’d hear people say, “I haven't had anybody ask me in 30 years what I think or feel.” But at the same time, they’re getting flyers from the Proud Boys and other alt-right groups.

Tell me more about your work to fight the rise of white nationalism in Idaho.

White nationalism has always been an undercurrent in Idaho, but it’s really been emboldened since 2016. We just had a white nationalist run for City Council in Garden City. And white nationalists will not only hold a rally, they’ll invite the Lieutenant Governor to open the rally. So it's a really dangerous climate, but the biggest danger is that there's a political analysis is being provided by alt-right, and they are seizing upon the fact that they have that power already in the state, and they think they can take more of it back to advance their agenda.

In the nineties, the Democratic Party started to walk away from rural voters. This accelerated after the 2008 financial crisis, when the big funders of progressive causes followed suit. This left a giant void that has consistently been filled by the hard right. ALEC, the Koch Brothers and every version of white nationalist group has really just started organizing in really dangerous ways in these communities.

We’re fighting back: with our help, Boise just passed a municipal resolution against white nationalism.

How do you find common ground in such divisive times?

It’s about finding someone’s self-interest. Idaho has the lowest minimum wage in the nation - $7.25 an hour. For six years, we’ve presented a bill to raise it. But it’s not easy – because unions already have a higher wage, and for communities that face disability, unless a wage increase is tied to Medicaid block grants or increased State funding, it results in a decrease in services.

So we make the case that unions play a profound role in this world about standing up and advocating for workers, and what will they do if they don't have any new membership. With groups working on sexual and domestic violence, we point out that the main reason women can’t leave abusive relationships is financial dependence. And for people with disabilities, it’s “You know this is the right thing to do. We're going to stand with you on a number of issues from healthcare to housing, and we can count on you for advocacy.”

How will the Roddenberry Fellowship help you continue and expand your work?

First, I feel massive gratitude that they are making an investment in a place that has been left out and forgotten, where people have felt voiceless. To have places like Idaho and rural communities across the country acknowledged as being part of our shared vision and solution is game-changing.

The alt-right’s been doing it for years, and we’ve seen that impact. Our future depends on rural, urban and suburban communities uniting in a shared struggle, and the Roddenberry Fellowship will help us do this.

We need to be bold in our approaches. There's this idea that we’re seeing in the presidential campaign right now. “Let's not hope for more - the best we can get is a Biden, let’s play it safe.” But nothing that’s amazing in this world has happened by playing it safe.

I was recently in Poland with a group of activists, and we visited the Auschwitz concentration camp. And the guide started talking to us about the Nazi rally in Charlottesville. “Please go home and fix it, as the activists that you are,” he told us. “Because the whole world is watching, and taking our cues from you.”

Seeing the history of anti-Semitism and white nationalism playing out on the world stage through this administration has been incredible impetus to really deepen our work on it.

That the Roddenberry Foundation has decided in this critical time to respond to these dangers is a really good example for all funders, about the kind of things that will actually create the world we want to live in. Because it’s not about foundation-directed programming, it's about cultivating the creativity and the energy in the passion of people who are working in communities to build that future and make it real.