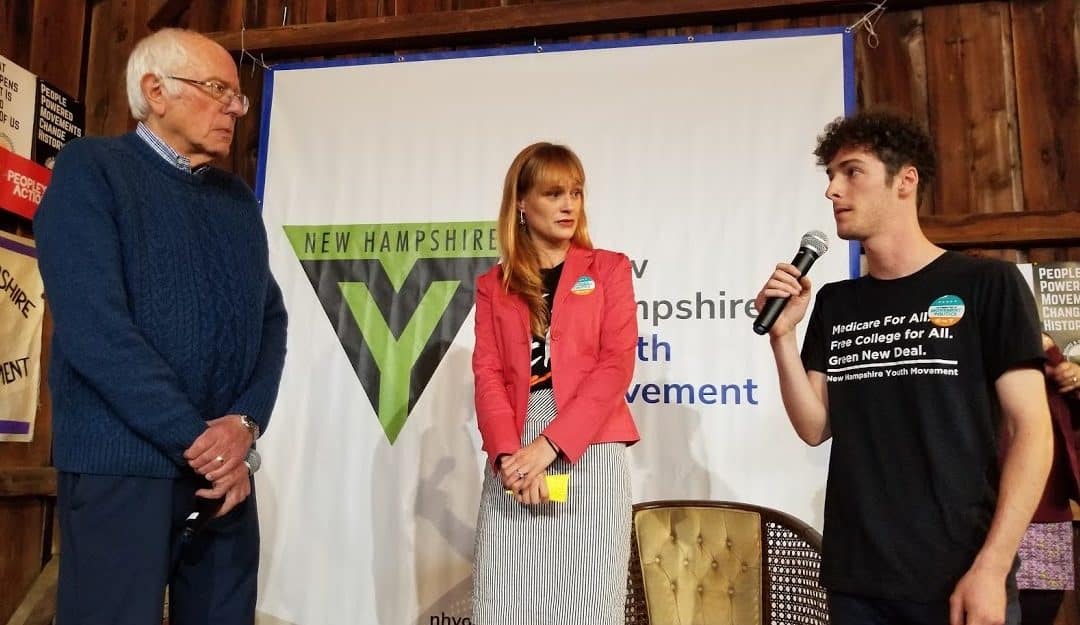 “The one percent in this country is very powerful - no ifs, ands or maybes. But you know what? The 99 percent, when we stand together, is even more powerful.”

With these words, Sen. Bernie Sanders issued a rallying cry for a broad social movement - one centered on solidarity, more than a single candidate - to create a mandate for change in the 2020 presidential elections.

Sanders spoke to the hundreds of activists from New Hampshire, Vermont, Maine, Connecticut and New York who gathered at Monarch Farms in Claremont, New Hampshire for a conversation with him last Thursday. The event followed a People’s Issue Forum organized by People’s Action, Rights & Democracy (RAD), and the New Hampshire Youth Movement (NHYM). 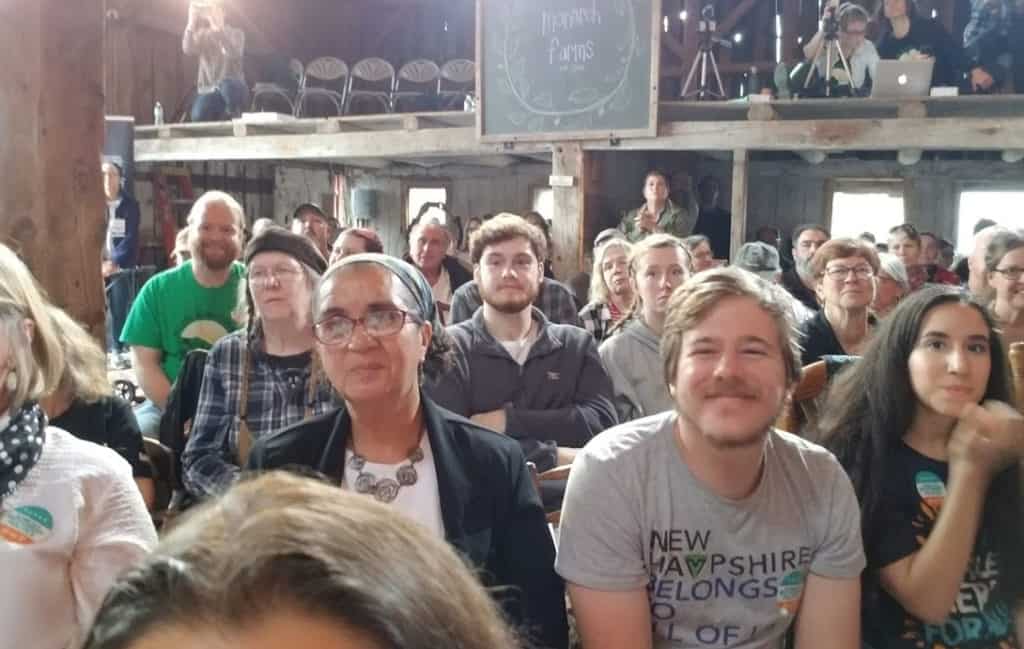 This conversation featured frank discussions of what is at stake for voters around health care, workers’ rights, immigration and the environment. Sanders listened carefully as People’s Action members shared personal stories of environmental, racial and economic injustices in their communities.

“We’ve got to build an unprecedented grassroots movement,” Sanders said, “not only to beat the most dangerous president in modern American history, but we need that movement to transform our economy, our energy system and our government. And the only way we do that is when millions of people are prepared to stand up and fight.”

Lucy Velez, from Our City Action in Buffalo, described how environmental pollution from the Peace Bridge, which spans the Niagara River near her home, impacts the health of her community. “That causes a lot of emissions,” she said, “and when you breathe and suck it in, you have a community that has a lot of asthma and bronchitis.” 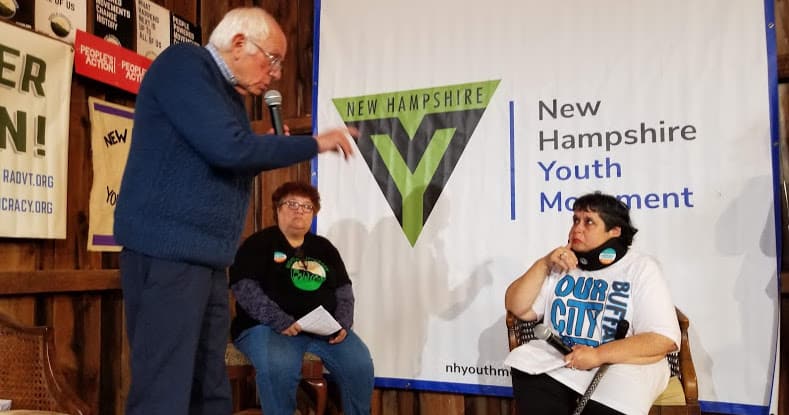 “I’m tired of living in a frontline community,” Velez told Sanders. “I’m tired of these corporate developers and businesses profiting from making my community sick and me ill.”

Sanders responded by promising billions of dollars of investment in frontline communities as part of a Green New Deal, to end the more than 100,000 deaths in the United States every year from environmental toxicities. “As we transition away from fossil fuel, we are going to pay special attention to those low-income communities, communities of color, that have suffered additional illness.”

Tanya Vyhovsky, a social worker and RAD member from Vermont, described to Sen. Sanders how the price of the epinephrine or “epi-pen” injections her life depends on has been raised by the pharmaceutical company Mylan from $10 to over $500 each - a cost her insurance refuses to cover, and she simply can’t afford to pay. 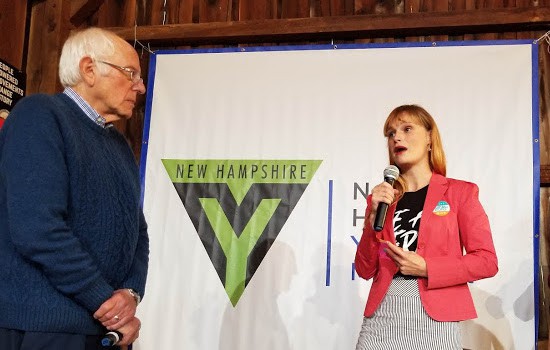 “My life is at stake every day because a corporation decided to prioritize their profits over people’s lives,” she said. “Next time, I might be a casualty of their greed.”

“It is not only that we have an industry that is greedy, it is corrupt, and they are engaging in price-fixing and collusion,” Sanders told her.

Rural New Hampshire has been hard hit by the opioid crisis, and Sanders, in his response to NHYM's Tristram Patoine, whose mother became addicted to prescription painkillers and then heroin after a car accident, insisted opioid manufacturers must be held accountable for fueling this public health crisis.

"They hired more and more salesmen to go out and sell that product so they could make more money as people got addicted, and hundreds of thousands of people died," Sanders said. "That is criminal, criminal activity, and we will hold those CEOs accountable."

He also  described how he was shocked to discover that the price of insulin in Canada is one-tenth of its cost in the United States, and he endorsed People’s Action’s call for a public option for the production of essential medicines.

“Do you think we’re going to sit back and let the pharmaceutical industry engage in price-fixing, holding the American people hostage? Of course we’re not. We’re going to make sure we produce the best quality medicine in the world at the lowest possible price.” 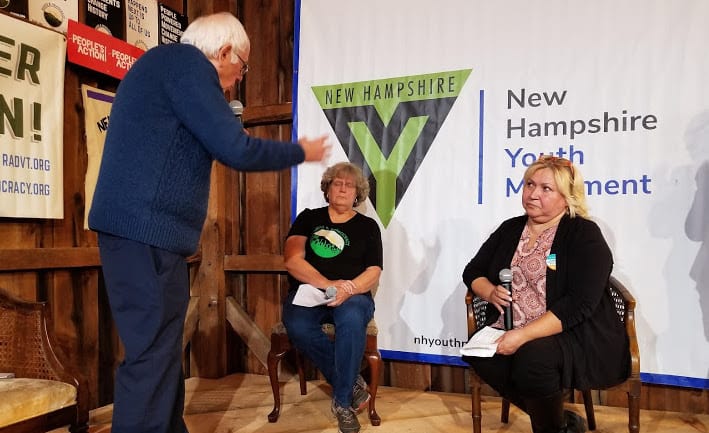 Maribel Rodriguez, a board member of Connecticut Citizen Action Group, described how she, as a Certified Nurse’s Assistant (CNA), worked for $5.50 an hour until she was able to join a union, asked Sanders how he plans to grow the middle class.

“When we talk about the Green New Deal and we talk about rebuilding our crumbling infrastructure, we are creating many millions of good-paying jobs: our roads, our bridges, our water system… we’re going to pay our teachers a living wage of at least $60,000 a year.”

Sanders also called for changes to corporate governance and decision-making to prevent companies from offshoring jobs and making other decisions that favor short-term profits over the longer-term interests of their workers.

“What I want to see is the empowerment of workers - that they have a say in the jobs that they do, not be treated as cogs in the machine,” Sanders said. He endorsed the goals of the New Social Contract for Workers that has been proposed by People’s Action, RAD and other movement partners, and called for workers to have 45 percent of the seats on a corporation’s board of directors, and 20 percent of stock in large corporations. 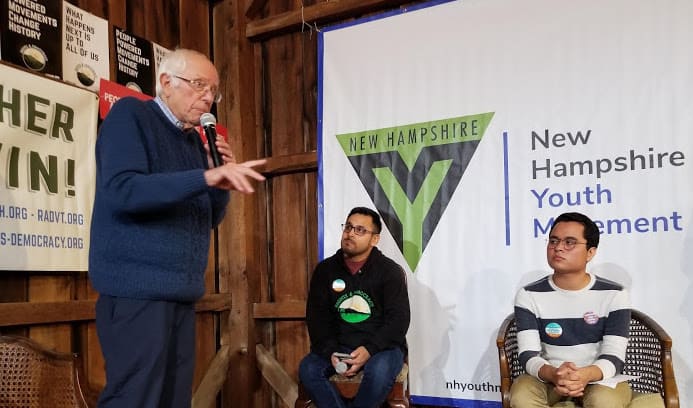 Sebastián Fuentes, a member of RAD in New Hampshire, described how under the Trump administration the U.S. Border Patrol sets up highway checkpoints throughout New Hampshire and has aggressively expanded its searches of people and property up to 100 miles from any land or sea border - which includes all of Maine, Connecticut, Rhode Island, Connecticut and Maryland, and much of Vermont and New York.

“Even though they say they don’t do it, if you are a person of color, you get pulled over,” said Fuentes. “And if you have an accent, you get double inspected. They spread fear into communities and cause irreparable damage to the trust our communities should have to law enforcement.”

“We are going to end the ICE raids that are going on right now,” said Sanders. “The main thing we will do is we will end the kind of terror and fear that’s being instilled in so many people in this country. That we will end, absolutely.”

As he closed his remarks, Sanders thanked the activists for their commitment to change and encouraged them to continue. 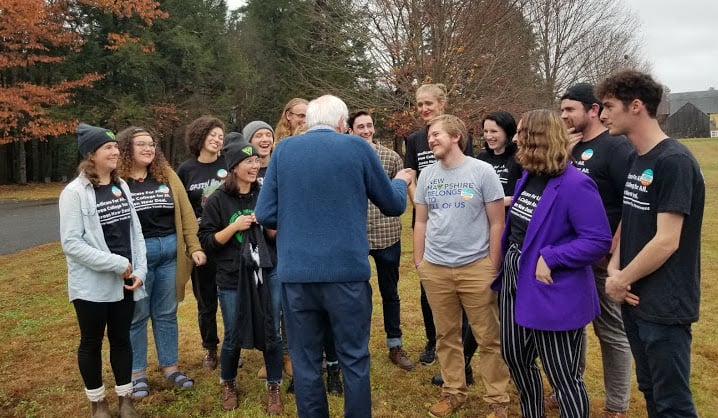 “ I appreciate that you’re willing to address the major crises that are facing this country,” Sanders said. “We are taking on the incredible power of Wall Street, the drug companies, the insurance companies, fossil fuel, the prison industrial complex, the military industrial complex. That is unbelievable power. And the only way real change has ever taken place in this country is not when somebody on top did it, it’s when millions of people stood up and fought for justice.”