On The Freedom Side At The Nevada People’s Presidential Forum 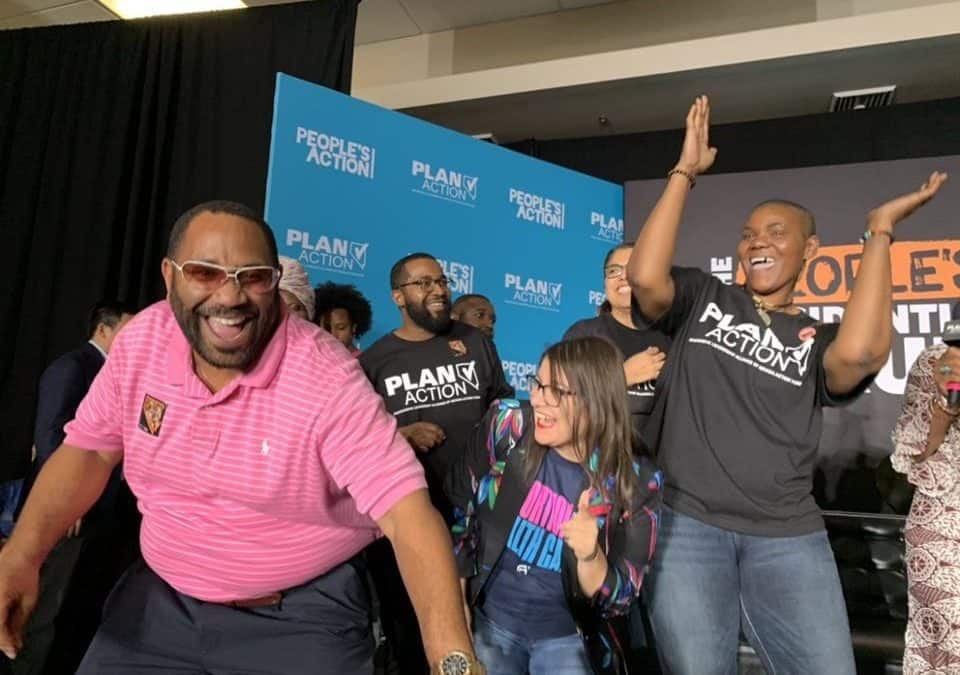 The Nevada People’s Presidential Forum was filled with insightful moments, but it was also a celebration - it ended with a dance party, as PLAN Action organizer Champagne Clark led the crowd gathered at the East Las Vegas Community Center in an enthusiastic call and response. “What side are you on, my people?” she asked from the stage. “We’re on the Freedom Side!” came the cheer, without a moment's hesitation. 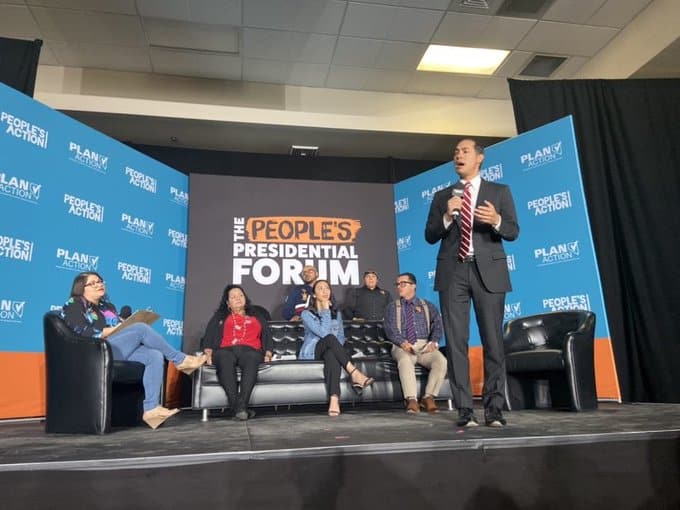 That, in its essence, was the spirit of Saturday's forum - a gathering of People's Action members with presidential candidates Julián Castro, Bernie Sanders and Andrew Yang. It's also the belief that motivates the work of PLAN Action and other groups in the People’s Action network.  At events like this, real people take center stage, and get to ask the hard questions of the candidates.

“Since I’m Native American, the water and the land mean a lot to our people,” said Dresser, a Washoe Paiute youth member of the Reno-Sparks Indian Colony, as she described how the Anaconda mine contaminates land and water near the Yearington Paiute Reservation. 84.9 percent of land in Nevada is public, and so under an 1872 law open to mining by private companies, often without tribal permission.

“Our sacred sites also have food we would use as staples that we still gather today, and they’re getting contaminated,” she told Castro. “How will you protect our sacred sites?”

“I would strengthen the requirement for consultation with Native communities with projects on their lands that are impacting their quality of life,” said Castro, citing the experiences he gained working with Native communities while Secretary of Housing and Urban Development under President Obama. “I want to make sure we can do whatever is possible to restore a respect and a working relationship, and an understanding.”

Castro’s remarks drew applause, and a flurry of waving green cards - signs of approval -  from the hundreds of members of PLAN and other People’s Action affiliates from across the West and Southwest - including GroundGameLA an SF Rising from California, LUCHA from Arizona, ONEAmerica from Washington State and United Vision for Idaho - who gathered for the event. Thousands more watched the event online via livestream over CrowdCast, Facebook, and in posts featured by NowThis and The Guardian. 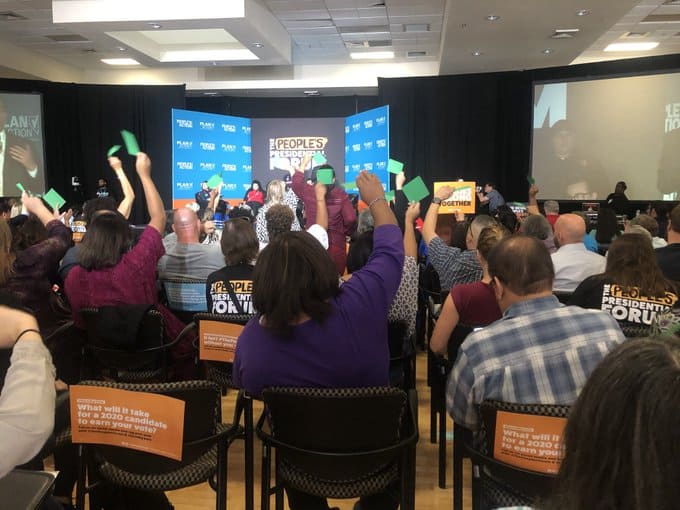 Each audience member had a green card and a red card to signal how they felt about the candidates’ remarks.

Indeed, red cards flew into the air more than once. For instance, when entrepreneur Andrew Yang called the expanded storage of nuclear waste at the state’s Yucca Mountain a “national issue, not a Nevada issue,” red cards went up fast.

Yang listened, then acknowledged he wasn’t fully familiar with the local consequences of issues like this and the 287(g) program, which has led to immigration raids by local law enforcement. He said he was willing to sit down with residents to learn more. 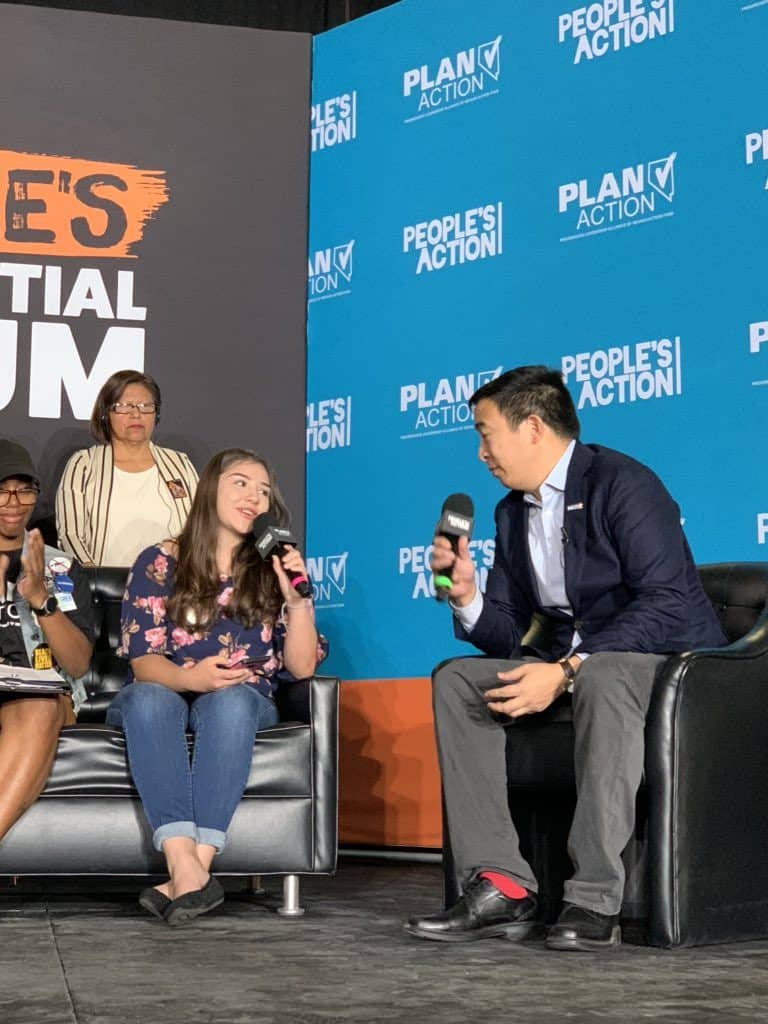 “For me, this is an issue we have to come together and face,” Yang added, as he committed to meet with Nevadans about Yucca Mountain. “The fact that you are bearing the brunt of it, I agree, is not appropriate.”

That’s what makes the People’s Action Presidential Forums unique - real questions are asked by real people, and we have an opportunity to gage how candidates’ answers measure up to the concerns of these multiracial group of motivated, engaged voters, in real time.

At each People’s Forum, candidates get to respond - but voters do, too. That’s what makes #ThePeoplesForum a no-stump zone, and the People’s Action approach to movement politics different.

“In 2020, People’s Action will mobilize 50,000 volunteers, organize 3 million voters, and we will send Trump packing,” said Bree Carlson, the Deputy Director of People’s Action. Carlson is a Reno native who started her career as an organizer at PLAN Action.

“We are a people-powered, multiracial organization whose power comes from our member groups like PLAN,” said Carlson. “Put simply, we fight evil for a living.”

The Las Vegas event - which follows one held in Iowa on September 21 - was introduced by Rep. Pramila Jayapal (D-WA). Jayapal co-authored the House version of the Medicare For All Act of 2019, and started her career as an organizer at ONEAmerica, a People’s Action affiliate group in Washington State.

Other speakers included Assemblyman Alex Assefa, a PLAN member and former refugee from Ethiopia who, as a newly elected Las Vegas Assemblyman, is the  first African elected in the state.

Castro also laid out his plans to invest in mental health care and the rebuilding of Puerto Rico, and spoke out against Las Vegas’s municipal ordinance to criminalize sleeping in public spaces, saying it does nothing to address our nation’s housing crisis.

“I’ve laid out investments we need to make to end youth homelessness, family homelessness, chronic homelessness,” said Castro. “I was disappointed in the ordinance that Las Vegas is considering that they would criminalize homelessness.”

When asked about our nation’s housing crisis, Yang drew attention to his signature campaign proposal - a Universal Basic Income, which he calls a Freedom Dividend, echoing a proposal first made by Martin Luther King, Jr. in 1967 - of $1,000 a month to every U.S. citizen over 18. 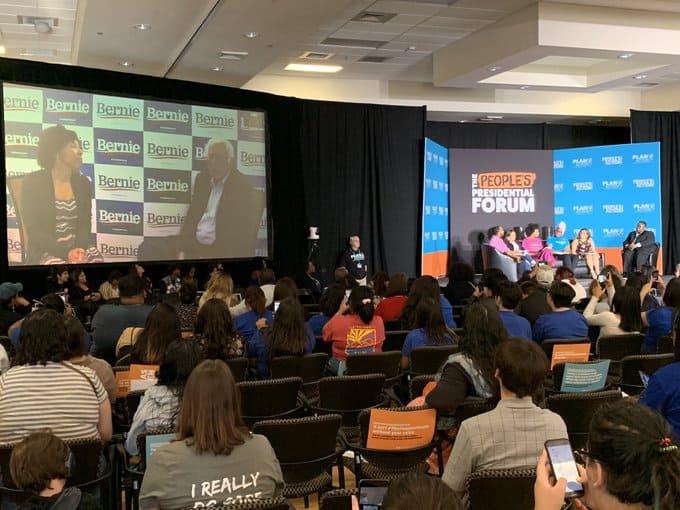 Sanders, in livestreamed remarks from South Carolina, listened to poignant testimony from Joseline Cuevas, a University of Las Vegas in Nevada student as she described how her family has suffered years of separation, anxiety, and fear because of their mixed immigration status.

“In 2010, a bill was passed in Arizona that allowed sheriffs to collaborate with ICE,” said Cuevas, explaining how two of her uncles were detained. “As soon as we cross the bridge into Arizona, I feel my chest get heavy and I struggle to breathe. Visiting my family should be a fun experience, and not something that brings fear and triggers my anxiety.”

The Nevada People’s Forum ended with a dance party, as PLAN Action organizer Champagne Clark let the room in an enthusiastic chant. “What side are you on, my people?” she asked one side of the room. “We’re The Freedom Side!” responded the other side.

“Closest to the solutions!” the crowd of PLAN and People’s Action members shouted back enthusiastically, again without a moment's hesitation.