The GM Strike: A Century of Context 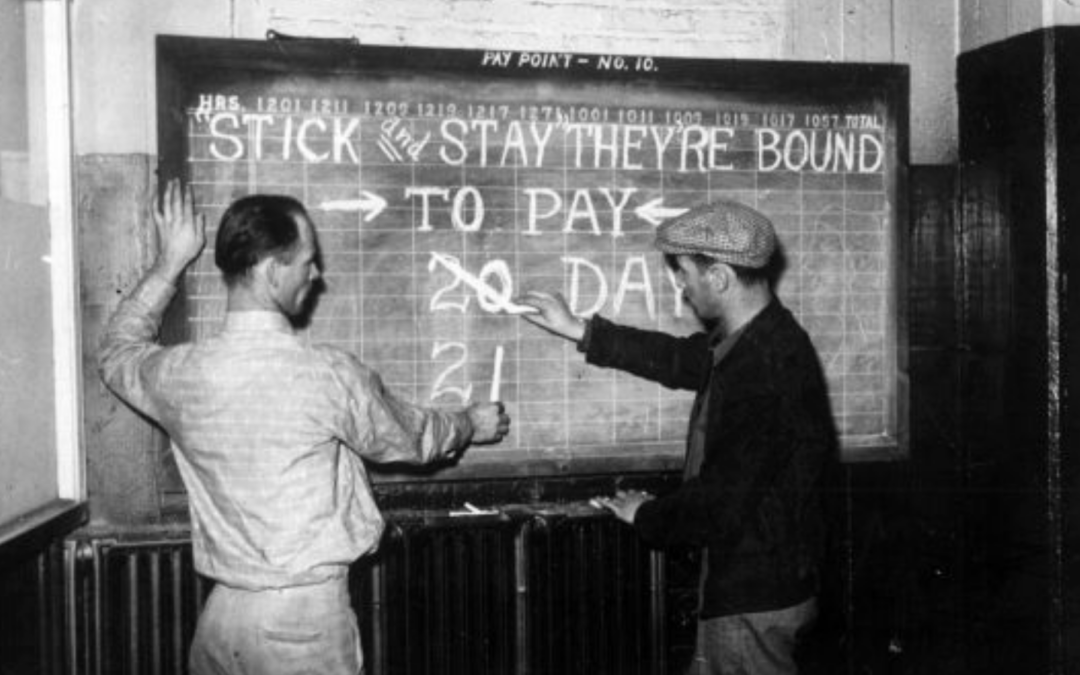 Wars end with treaties. In the middle of the 20th century, the “class war” that finished off America’s original plutocracy ended with the “Treaty of Detroit.”

Fortune, the business magazine, came up with that catchy turn of phrase back in 1950 to describe the landmark collective bargaining agreement that the United Auto Workers union had just reached with General Motors. What made the pact so historic? America’s most powerful corporation was essentially agreeing to “share the wealth.”

In exchange for labor peace, notes historian Nelson Lichtenstein, GM guaranteed auto workers what amounted to “a 20 percent increase in their standard of living” over five years, along with a new health care benefit and a standard $125 monthly pension, the equivalent of about $16,000 annually in today’s dollars.

This “Treaty of Detroit” would help energize a huge postwar shift in the distribution of U.S. income and wealth. In the quarter-century after 1945, the real incomes of average Americans would double, in the process manufacturing the first mass middle class the world ever seen.

Now UAW workers are once again making headlines, demanding just as they did decades ago that General Motors share the wealth with the workers who toil to create it. And GM is sitting on plenty of wealth. Since 2015, the company has posted $35 billion in North American profits. But GM workers today find themselves struggling in a far different — and more difficult — political and economic environment than their forbears faced.

In 1950, the U.S. labor movement was beginning a third decade of sustained and significant growth. By the mid 1950s, over one out of every three workers in the nation carried a union card. Last year, by contrast, only 6.4 percent of American private-sector workers belonged to a union.

The executives who run General Motors are operating in a different environment, too. In the 1950s, the U.S. tax code subjected the nation’s rich to consistently steep tax rates. Individual income over $200,000 faced a 91 percent federal income tax throughout the decade. In 1950, GM’s top executive, Charlie Wilson, paid 73 percent of his $586,100 total income in taxes.

With tax rates on high incomes that high, top corporate executives had little incentive to squeeze their workers ever tighter. Most all of any extra personal rewards that squeezing might bring would soon funnel, via the tax code, to Uncle Sam.

Today, the opposite dynamic. GM’s top executives get to keep the lion’s share of whatever they can grab. And they’re grabbing plenty. The five highest-paid General Motors executives last year averaged nearly $10 million each. Not one dollar of those millions faced a tax rate higher than 37 percent.

All these millions for GM execs have come at the expense of GM workers, especially those hired since 2007. GM employees hired before 2007 have the protection of a traditional pension that guarantees a set income. They earn about $31 an hour. Workers hired since 2007 have no traditional pension guarantee and start at $17. About 7 percent of the GM workforce — the temps that GM has begun hiring over recent years — don’t even get that. They earn, the New York Times reports, about $15 per hour and don’t get full benefits.

These sorts of attacks on workers reflect the current weakness of the labor movement in the United States. The tax rates of the 1950s that discouraged corporate attacks on worker well-being reflected the labor movement’s strength. Unions helped establish those high mid-century tax rates on the rich. During World War II, the UAW and other progressive unions pressed President Franklin Roosevelt to push for a 100 percent top tax rate. FDR did just that, proposing that no individual American should have over $25,000 — about $400,000 today — after paying federal taxes.

Congress didn’t go along with that 100 percent top rate. But lawmakers did set a 94 percent top rate for the war’s last two years, and the nation’s top tax rate would hover around 90 percent for the next two decades, creating in the process a much more equal America. This greater equality meant more dollars in the pockets of average people. Americans of modest means could suddenly afford to buy cars, and auto makers like GM rushed to serve the huge new mass middle-class market with modestly priced auto offerings.

Today, in a top-heavy America with a shrinking middle class, companies like GM can make more money selling high-mark-up expensive products to small numbers of affluent consumers than they can make by selling large numbers of affordably priced products to people of modest means.

In our unequal contemporary America, in other words, corporations like GM don’t need to sell lots of product to make big profits. They can get richer running companies that produce less. Last November, GM announced plans to shut down four U.S. plants that make product that’s not moving. This past February, GM announced the elimination of 8,000 additional white-collar jobs.

The not-so-subtle message to GM workers from GM’s executive class: You may need your jobs. But we don’t need you. So swallow whatever we offer.

By going out on strike this past Monday, some 49,000 GM workers have served notice that they don’t intend to swallow that whatever. But are today’s GM workers facing a war they cannot win? Does our ferociously unequal America leave them little chance of success?

A little more history might help here and give GM workers — and all of us who want to see a more equal America — some real reason to feel hopeful.

A century ago, in the early days of mass auto production, jobs in auto plants ranked among the worst that Americans could get. In 1927, a young Walter Reuther started working for a company just outside Detroit that made auto bodies for Ford. Reuther worked the night shift, from 5:30 in the evening to seven in the morning. Each shift had just one half-hour break. At one point, young Reuther labored 21 consecutive nights.

Auto workers had to struggle for years to change these sorts of working conditions. But change them they did, with Reuther their most illustrious union leader.

In 1961, a retired UAW rank-and-filer by the name of Frank Tuttle would write Reuther — and the UAW — a heart-felt tribute. Tuttle had a special distinction. He had been the first Chrysler worker to start collecting a UAW-negotiated pension.

“On my 65th birthday in January 1950 I had three important messages before me,” Tuttle wrote, “from Social Security, telling me that I had an assured life income of exactly $38.69 a month; from Chrysler Corporation, declaring it would never grant the ‘preposterous’ pension demands of our union; and one from you saying that those demands would be won, either at the bargaining table or at the picket line.”

“Without the protection of our union it is highly improbable that I would have lived to be 65 at all and without the union who would want to?” Tuttle summed up. “Before our union, the best a worker could hope for was to die on the payroll — before he became old enough to be replaced by a younger worker.”

Change can happen. Inequality just makes that change harder — and ever more necessary.

Sam Pizzigati co-edits Inequality.org. For more on the 20th-century struggle that ended America’s original Gilded Age, check his 2012 book, The Rich Don’t Always Win: The Forgotten Triumph over Plutocracy that Created the American Middle Class, 1900-1970. You can follow him at @Too_Much_Online.