"We are a force that our land and our people desperately need.” With these words, Barb Kalbach – registered nurse, fourth-generation family farmer and board chair of Iowa CCI Action – opened the Iowa People’s Presidential Forum in Des Moines this Saturday. She was joined by 2,500 grassroots Iowa activists - CCI is the state's largest progressive group, with members in all 99 counties - and People’s Action members who traveled from across the Midwest to join them at the event.

“We are making it about us, because no candidate is going to save us!” said Sara Castro from Iowa Student Action. “We’re the ones we’ve been waiting for.”

Next up is New Hampshire, where candidates will speak on the University of New Hampshire campus in Durham on October 13, hosted by Rights And Democracy and the New Hampshire Youth Movement.

And that’s not the only difference between the two events: candidates at the People’s Forum knew they were entering a “no-stump zone.” Their answers had to be fresh – not fried. Because real people – thousand in the room and tens of thousands more watching the livestream at home – were listening very closely. 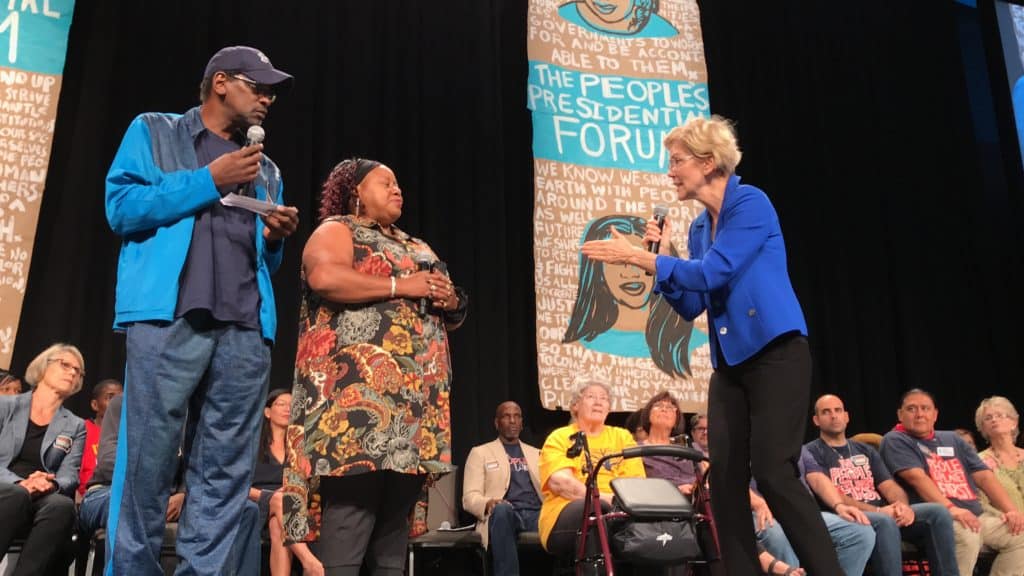 “The reason I wanted to be here with you today is that you get the heart of this,” said Senator Elizabeth Warren. “We’re gonna break up Big Ag. We’re going to adopt the policies that will let our farmers be good stewards of the earth, and we need Washington to be a good partner in this.”

Warren framed her candidacy as a battle against Washington corruption, and a chance regain seats at the table for working people and rural communities that have been left behind. 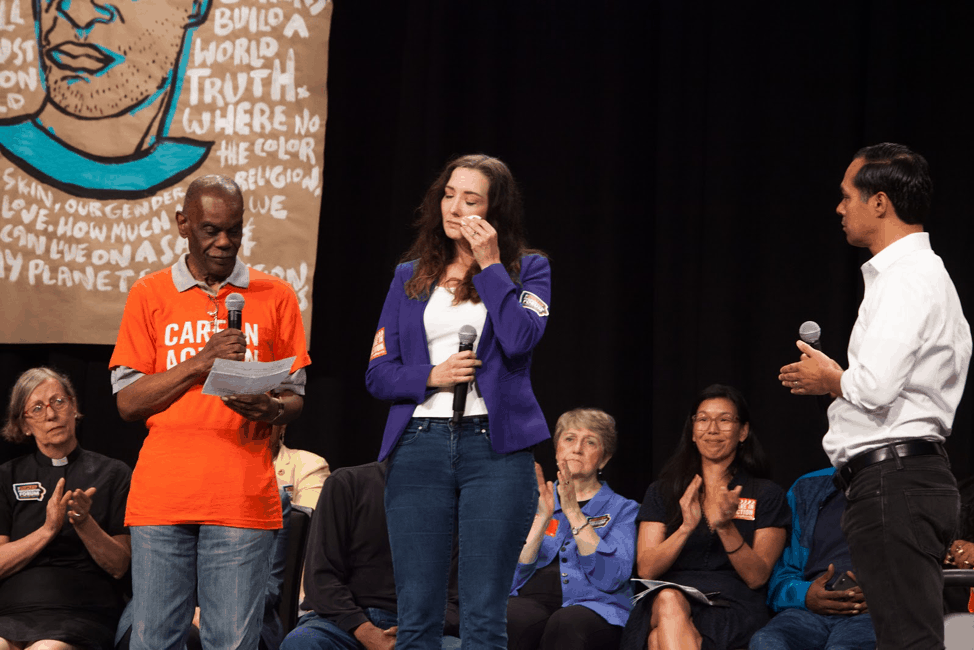 "I have called for universal childcare, universal Pre-K, universal higher education, universal family care and long-term care," said Castro. "I also want to make sure that as the baby boomer generation turns 65, that we have a plan to make sure they’re well taken care of. And that includes a place to live, it includes good healthcare." 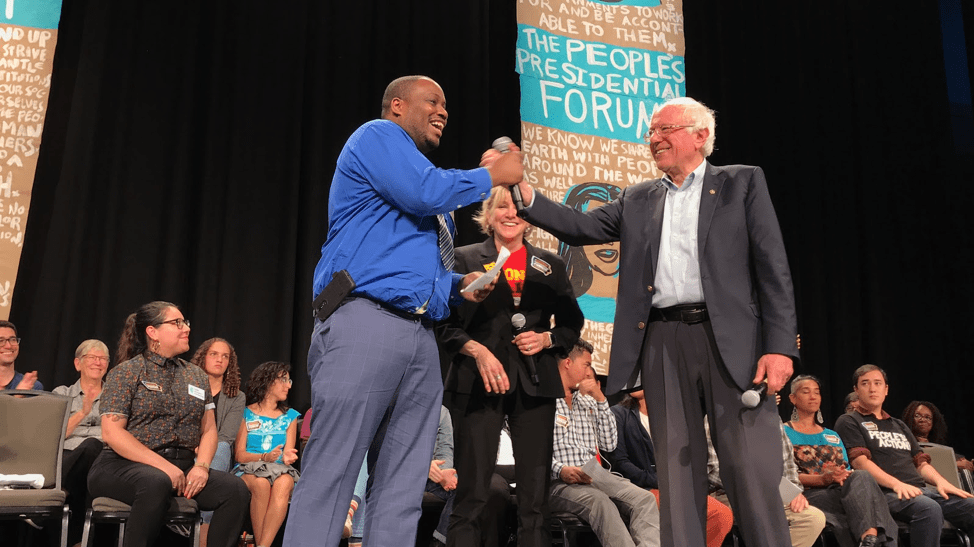 Senator Bernie Sanders made a strong endorsement of a nationwide $15 minimum wage and the right of all workers to organize.

“If 50 percent of workers in a bargaining unit plus one person sign a card saying they want to join a union, then they have a union, end of discussion," said Sanders. "Our estimate is that we believe that if we do these things, we could double the amount of workers in unions in 4 years."

One of the most emotional moments in the forum came when Sanders listened attentively to Juliza de Cortes, who came to the stage with her newborn child.

When she arrived at the border, her husband was deported, while she was held in a cell with 17 other pregnant women, in a cell so cramped they had to sleep standing up. 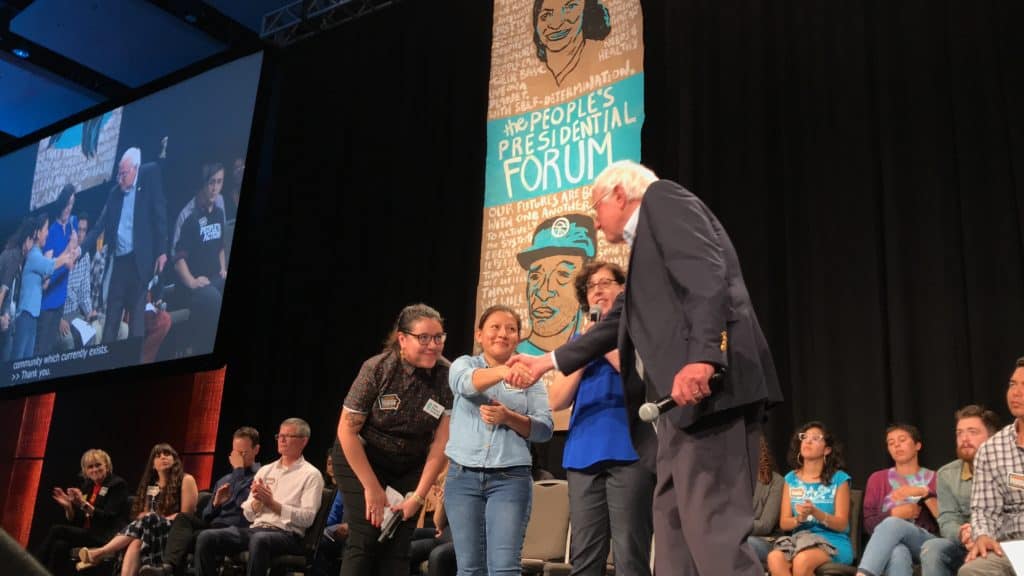 “Let me begin by apologizing to you, as a United States Senator,” Sanders said to applause. “We have a president who believes he can win reelection by demonizing, by criminalizing, you. I don’t believe that someone who travels for six months, who is pregnant, is a criminal.”

Sanders pledged that as president he would fight for comprehensive immigration reform and a path towards citizenship for immigrants. 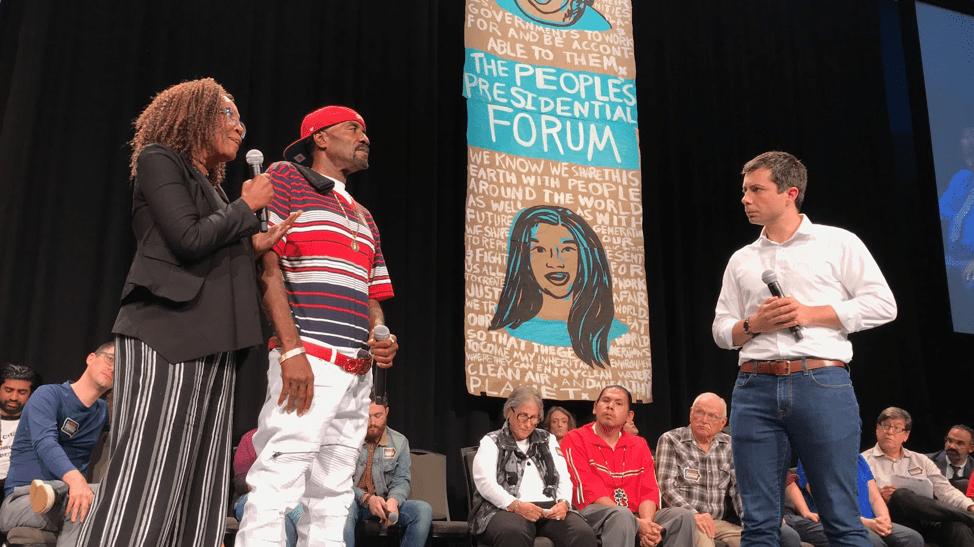 Mayor Pete Buttegieg was challenged by Kelvin Dunigan and Veola Perry of CCI Action about his record on racial justice as mayor of South Bend, Indiana. Dunigan was recently racially profiled and harassed by Des Moines police, just a block from his home.

“I felt humiliated, I felt anger, but most of all I felt relief,” said Dunigan. “Even though the cop stopped me for no reason, I was only a block from home - I could have had jail time or be shot dead as a Black man.”

Buttegieg spoke out in favor of an initiative launched by CCI Action and the NAACP to specifically prohibit racial profiling in Des Moines, in particular by the police department, and highlighted the importance of national and local leadership on racial justice.

“This is about whether community members feel that they can trust those who are sworn to keep them safe, and whether there will continue to be systematic disempowerment of Black people in our country, not only when it comes to criminal justice, but also to health, housing and economics," said Buttegieg. "Every time we sit at the table to talk about one piece of it, we wind up talking about more and more of it."

Among the dozens of other grassroots leaders who engaged candidates at the forum were Native American leader Dawson Davenport from the Meskwaki Nation, Diane Charity from Kansas City Tenants In Action, Terrence Wise from SEIU/Fight For $15.

“Democracy is not a spectator sport,” said State Representative Jodi Emerson from Eau Claire, Wisconsin. “ Each and every one of us needs to be recruiting candidates and asking people to run and then helping them however we can.”

This bold civic spirit ran like electricity through the thousands gathered at the Iowa Events Center on Saturday, and was echoed online in comments by the tens of thousands who watched the event online through CrowdCast – where they could vote for the candidates and positions they preferred – as well as on Facebook, Twitter and YouTube.

On October 13th, in New Hampshire, they’ll be back for more. 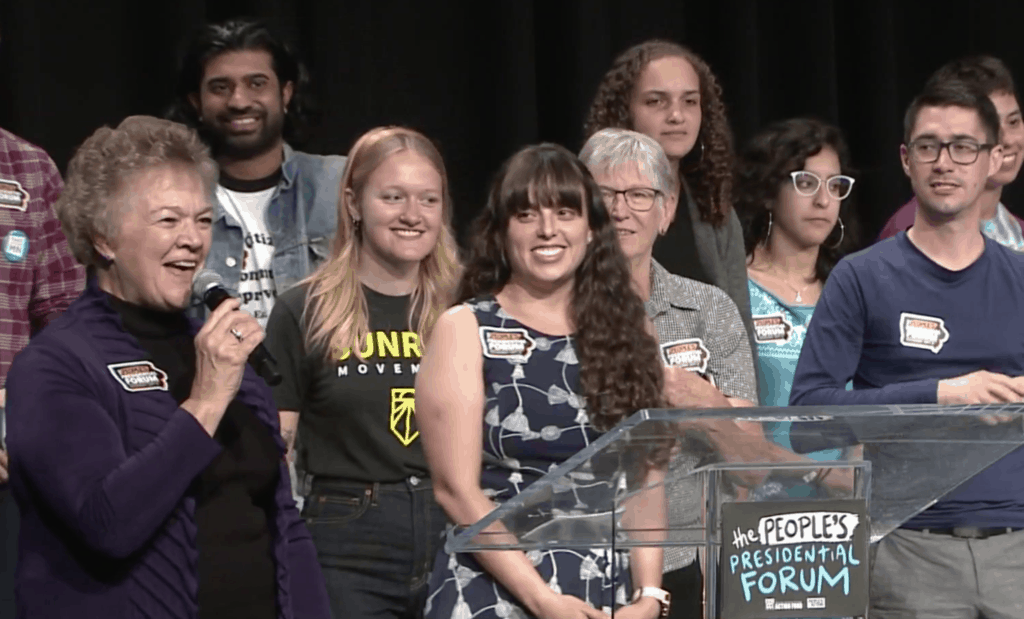 “Now go home – and don’t forget that!” Barb added, with a farewell wave and a smile.