Organizing From The Inside 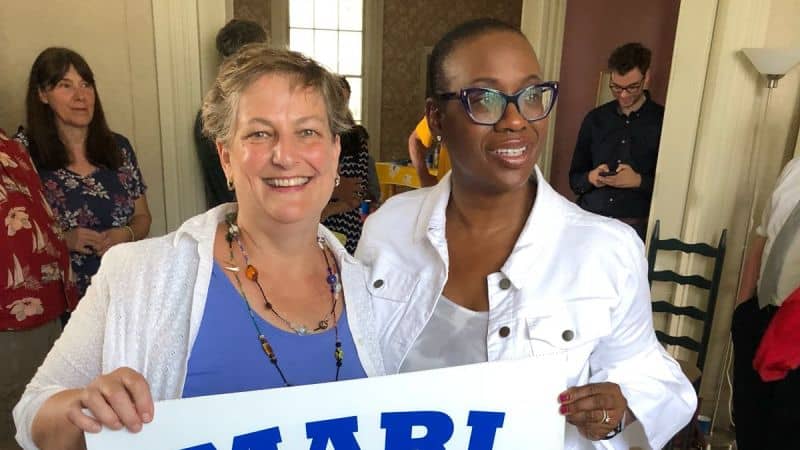 We all want a new President – but at People’s Action, we know it will take a lot more than one candidate at the top to turn this country around. That’s why we’re recruiting and training more than 500 grassroots community leaders to run for elected office at every level of government, who will co-govern to advance the values and goals in our People’s Platform.

Vermont State Representative Mari Cordes is one of our champions. After raising two daughters on her family farm, she returned to school to become a Registered Nurse. While at UVM Medical Center, she organized and led teams providing medical and disaster relief around the world, and was a founding organizer and second president of her union, Vermont Federation of Nurses and Health Professionals, AFT local 5221.

Rep. Cordes has been an advisor To Rights And Democracy, a People's Action member group, who endorsed her first-time candidacy to represent Vermont's Fourth Legislative District last November. As an activist, she worked to pass health care reforms that include Vermont's  Universal Health Care bill and paid sick days.

OurFuture’s Leigh Friedman caught up with Rep. Cordes to see how things are going. This is the third in a series of weekly spotlights at OurFuture about co-governing with elected officials. To read more about this work, click here.

Q: How did your first legislative session as a Representative go? Was the job what you thought it would be?

I loved it. It was everything I thought it would be and more. I spent quite a bit of time in the statehouse working on policy in the past, both as the nurses’ union president and through other grassroots work, so I knew how the committees worked and how the policymaking happened from an outsider's perspective.

There were frustrations and disappointments, but that wasn't surprising. The parts that I loved most were the elements I love about grassroots organizing and coalition-building, within communities and between communities: solving problems and helping everyday people.

Q: Were there coalitions that you built in the legislature?

I have been active in the Healthcare is a Human Right Campaign through the Vermont Workers’ Center, and drafted and lobbied for healthcare policy as union president, including banning insurance corporations from discriminating against transgender individuals through clarifying bulletin that passed in 2013. I am very familiar with working in coalition and solidarity with groups of people. It's how we formed our nurses' union in 2002 at what was at that time called Fletcher Allen Health Care.

Coming into the statehouse, I intended to continue organizing from the inside. I was concerned because, in the two years before the 2018 election, I had been active in the uprising after the current president’s election. I was arrested eleven times during nonviolent direct actions against the attempts to repeal the Affordable Care Act, pass the Republican tax scam, and some other issues. Even though the Vermont legislature only runs from the beginning of January to the beginning of May, I was a little concerned about how much of my activist work I was going to have to give up or modify, and I didn't need to.

Because we're a citizen legislature – and I don't like using that word, legislature – we are full of community members for whom being in the General Assembly is not their primary job. Some folks are retired; I'm a registered nurse. I was still working 12-hour shifts almost every Saturday and Sunday during the session because I needed to, and because I feel that it's important to have working people in the statehouse representing the working community.

I was very busy and focused on, as I said, building coalitions within the statehouse and working on policy with my colleagues. I also stayed connected with grassroots activists and brought some of that work into the statehouse, particularly around climate change, which was one of my biggest priorities, if not my biggest priority. Some other freshperson legislators and I came together around climate change, and drafted a letter to House leadership with clear asks about what we wanted to accomplish this session. Then, I became an active member of the Climate Solutions Caucus, and am now a vice-chair. I stepped forward to be vice-chair because I wanted to commit myself to the work. There's an amazing group of advocates that have been doing climate work within the statehouse for many years and I'm happy to be joining in with them.

Q: What advice would you give to grassroots organizers about how to work with state legislatures to win on their issues?

The most powerful and effective way to move a legislator is by organizing people in their community to put significant pressure on them. We can do some of that within the statehouse, but as a representative from Addison County, I may or may not have sway over a Republican representative from Franklin County, or even a more moderate Democrat, let's say, from Bennington County. Even though we are organizing and building relationships within the statehouse, the most powerful means is still the people.

Q: What advice would you give to grassroots organizers who are considering running for an office like yours?

Go for it. Now more than ever we need people who are running because they care about issues.  People who have demonstrated that any political motivation they might have is not personal, i's specific to building communities, building an economy for everyone, and slowing down the rapid advancement of the climate crisis. We need people on board who are truly committed to doing that kind of work.

Organizers know that we lose a lot more than we win – until we don't. Often, when we win, it's after a long struggle. It's tiring. We can feel defeated sometimes. But then, we win. We need people in our institutions that can create policy as well be persistent.

As far as campaigning, it depends on the race. A House race like mine has about 7,000 voters. I can knock on a majority of those doors. Face-to-face interaction is the premium method. If it's a larger district, you still want to do as much face-to-face contact as possible, but you also have to show up at community events because you're not going to be able to knock on every door.

The principles are the same as organizing: listen more than you talk, find out what the individual is emotionally invested in, and find out what grabs them. That's pretty much it. Having the fortitude to campaign is also important, especially if you have to work full-time, as I did. I was campaigning full-time and working full-time as a nurse. I tried to get enough sleep. The best I could do for self-care was getting enough rest.

Door knocking was my favorite part of the campaign. You don't often have a reason to do it unless you are selling something, especially in this area. Most of the doors I knock on in Vermont are far-flung, out in the woods, at-the-end-of-a-dirt-road kind of houses. We go to places where people don't expect visitors, and it was a pleasant surprise how many people wanted to talk, even just for a short while.

For those that are thinking of running: if you identify as female and you are asked to run, you might question if you're qualified. I had to be asked three times by three different people, but I finally accepted it when I realized, "Of course it makes sense!"

All the streams of my life – organizing, Buddhist meditation training, my work as a nurse, union organizing, being a parent – all of those things just fed perfectly into this moment where I could say, "Yeah, that makes sense for me."

If you have an interest, you're concerned about issues, and you're committed to making a change, you should run.

Vermont State Representative Mari Cordes is a registered nurse, who was elected as a first-time candidate to represent Vermont's 4th legislative district (Addison) last November. A mother to two children, grandmother to two grandchildren, she lives with her spouse on their off-the-grid homestead in Lincoln.