'New' NAFTA Fails Workers On Both Sides Of Border 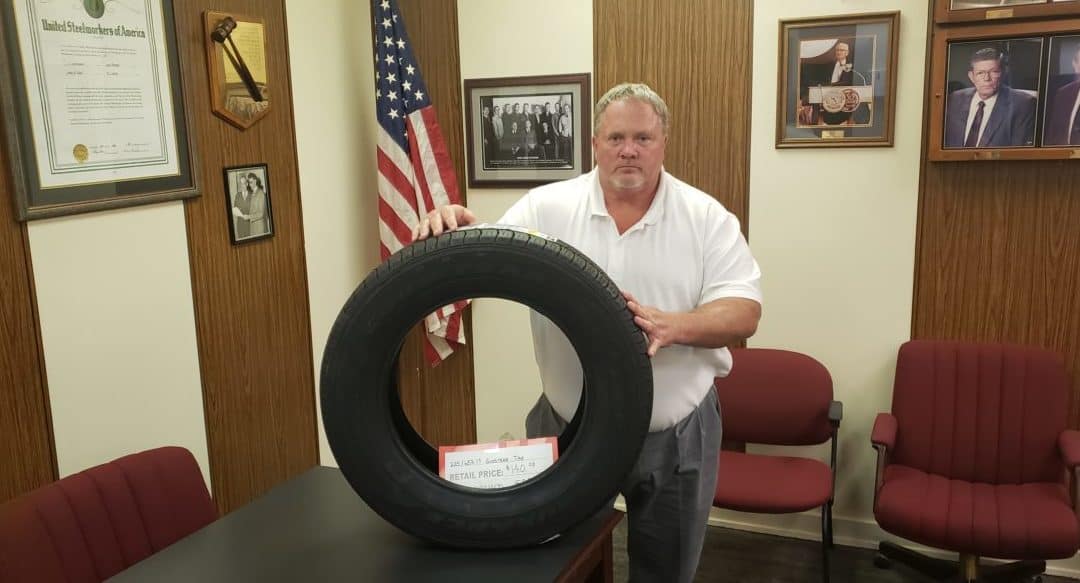 Mickey Ray Williams keeps a Goodyear tire in his Gadsden, Ala., conference room. Made in Mexico and imported to Gadsden, that tire induces fear.

It’s an Assurance All-Season tire. Those were developed at Goodyear’s Gadsden factory in 2014. Now some, or possibly all, are built in a brand-new, half-billion-dollar plant in San Luis Potosí, Mexico. And Goodyear is furloughing workers at its tire plant in Gadsden, where Williams is president of the USW local union.

This sad story is as old as NAFTA. That’s a quarter century of pain. An American corporation, GM or Nabisco or Carrier, builds a factory in Mexico. There, NAFTA will protect the company from tariffs when it imports the Mexican-made cars or Oreos or furnaces back into the United States. And in Mexico, the company can pollute freely, pay workers as little as $2 an hour, and establish company-controlled unions so workers can’t bargain for more. It’s a lose-lose for workers. American workers get fired; Mexican workers get exploited.

Goodyear hasn’t closed the Gadsden factory. But the Mexican tire in Williams’ conference room at the local union hall is a symbol of Gadsden workers’ dread that it will. As the new plant in Mexico geared up, Goodyear laid off 175 workers in Gadsden and 60 at its plant in Danville, Va., this year. Meanwhile, Mexican workers protested poor working conditions with a one-day strike not authorized by the company-controlled union. Goodyear solved that problem. It sent its Mexican workers a clear a message by firing 57 of the participants.

This is why the USW, and the rest of organized labor, opposes the proposed new NAFTA. It contains some new language regarding workers’ rights and environmental protection. But it lacks meaningful enforcement provisions. Without them, corporations like Goodyear will continue to invest in Mexico while closing American factories. And workers in both countries will continue to get hurt.

Goodyear announced the layoffs in Danville and Gadsden in February. Many of the workers furloughed in Alabama were just starting out. “We got a young work force in Gadsden,” Williams said, “When you look at them and they have their little kids with them, it is just so sad. They are wondering, ‘Where do we go from here?’ A lot of them want to come back to work.  They don’t understand why an iconic American company would run out from under them.”

The local union searched for jobs in the area for them. “A lot of them took a $10- to $13-an-hour cut in pay,” Williams said, “They are downsizing, selling their cars, even their homes, to get cash.” Some took transfers to other Goodyear plants, but that is wrenching. It means uprooting their whole family, moving far away from relatives and friends, and starting over.

And they are afraid. The workers took cuts when labor agreements were negotiated in 2006, 2009 and 2013. But Americans can’t compete with Mexican workers earning $2 to $6 an hour.

The Gadsden workers have good reason to be fearful. They’ve seen corporations close American factories after building in Mexico. Over the past 20 years, the United States lost 5 million manufacturing jobs and nearly 90,000 factories. Some went to China or Vietnam or India. But a lot went to Mexico.

For example, in recent months, GM closed factories in Lordstown, Ohio, and Warren, Mich., as part of its plan to shutter five plants in the United States and Canada and slash 14,000 North American jobs. Its shops in Mexico, however, are going gangbusters. It decided last year to manufacture the revived Blazer model in Mexico and has shifted production of several cars, SUVs and trucks south of the border. Now, GM is the top carmaker – in Mexico.

That is the legacy of NAFTA. And that’s what Congressional Democrats are committed to terminating with a new NAFTA. House Speaker Nancy Pelosi appointed a committee to work with U.S. Trade Representative Robert Lighthizer to fix the proposed new NAFTA.

Committee members went to Mexico, where Goodyear denied them access to the factory. Afterward, the lawmakers demanded answers from Goodyear.

The lawmakers noted in a letter to Goodyear CEO Richard Kramer that the corporation signed a contract with a “protection” union before the plant had hired a single worker. Real unions are organizations formed by workers who elect leaders to negotiate with companies for better wages and working conditions.

Protection or company unions shield corporations from talks with actual worker representatives. They safeguard the corporation, not the employees. A protection union formed before anyone is hired obviously does not represent the workers.

Less than six months after the Mexican tire plant opened in November 2017, between 600 and 800 of its workers conducted a one-day wildcat strike to demand real union representation, higher wages and safer working conditions.

Safety in a tire plant is a life-and-death matter. After several incidents at the Goodyear plant in Danville in 2015 and 2016, inspectors found more than 100 health and safety violations and fined Goodyear $1.75 million. And that’s in the United States, where standards are higher and Goodyear knew it was subject to regulation and inspection.

The Congressional committee spoke with several of the workers Goodyear fired after the wildcat strike, and the lawmakers reported in their letter to Goodyear that the workers described: “poor working conditions, lack of protective gear and safety and overall training provided to workers, non-reporting of hazards, deductions that are taken from already low wages, and discrimination and harassment.”

The committee, which sent a copy of its letter to Trade Representative Lighthizer, told Goodyear that mistreatment of workers at its Mexican plant undermines any confidence lawmakers might have in labor reforms recently adopted in Mexico.

“While we are told that Mexico’s labor reforms and a renewed NAFTA will lead to positive changes in Mexico and in America, what we saw at Goodyear clearly illustrates the entrenched way of doing business in Mexico that is based on exploiting a powerless workforce,” the committee wrote.

The committee asked Goodyear to respond to the workers’ allegations and to tell Congress what percentage of the tire production in Mexico is being exported to the United States, as well as how those imports will affect Goodyear’s U.S. workers, like those in Gadsden.

On Monday, Goodyear sent a letter to the committee denying any and all wrongdoing.  Kramer extended an offer for the committee to visit the plant in Mexico, with no explanation for why it rejected the lawmakers’ earlier request to inspect the facility. The CEO provided no concrete answer to the committee’s question about the percentage of Mexican-made tires that are exported to the United States or how that will affect the corporation’s U.S. manufacturing.

Kramer described the relationship between the corporation and the protection union in Mexico as just hunky-dory – which would be expected since the company controls the union. He said Goodyear intends to comply with Mexico’s new labor law forbidding protection unions, which means, of course, it has not yet.

Safety is a “core value for Goodyear,” Kramer said, and, “Goodyear applies its global safety and environmental standards and practices in Mexico, just as it does in the United States.” That will be of cold comfort to Mexican workers aware of Goodyear’s 100 violations in Danville.

The letter is three pages of double talk that satisfied no one, least of all Mickey Ray Williams and the workers in Gadsden.

Williams’ father worked at Goodyear in Gadsden for 36 years, retiring from a good, family-supporting job in 2002. Williams has worked there 17 years. But he doesn’t think Goodyear will be around for his kids: “I hope that plant is here when my kids get old enough, but I have a feeling we are in trouble.”

That tire in his conference room is a bad omen.