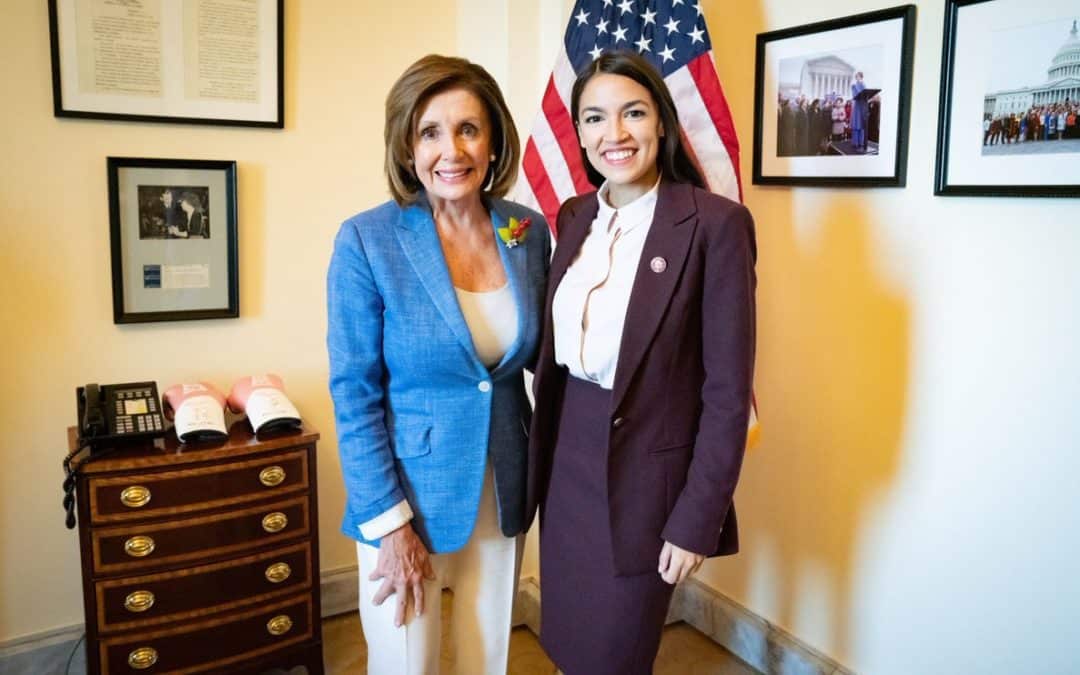 There’s nothing like the intervention of a true racist to provide a sense of proportion. The public dispute between House Speaker Nancy Pelosi and the group of four young, electric, progressive female legislators of color known as the “squad”—Alexandria Ocasio-Cortez (D-NY), Ilhan Omar (D-MN), Ayanna Pressley (D-MA), and Rashida Tlaib (D-MI)—was headed off the rails when Donald Trump butted in.

Sensing that he had lost the spotlight, Trump posed as Pelosi’s defender with the vile racist taunt that the four should “go back” to their “countries whose governments are a complete and total catastrophe.” (Ocasio-Cortez was born in New York, Tlaib in Detroit, Pressley in Cincinnati. Omar, who came to the United States from Somalia as a child refugee, is an American citizen.)

Trump’s hate briefly sowed unity, as Pelosi defended the four legislators via tweet. But the tensions are not likely to go away, for this isn’t a “catfight,” as Kellyanne Conway put it, nor a misunderstanding caused by the generational divide between the speaker and the freshmen. This is a fight about what the Democratic Party stands for, the majority coalition it seeks to build, and the way it does politics.

Though she’s lately received significant criticism from the left, Pelosi is the most effective and progressive speaker of the House in our time. The most powerful female elected leader in US history has been a forceful advocate for women’s rights and for increasing the influence of women in the House. That is what makes her repeated public denigration of the “squad” so jarring.

Notorious New York Times op-ed arsonist Maureen Dowd lit the latest flare-up, quoting Pelosi as saying: “All these people have their public whatever and their Twitter world. But they didn’t have any following. They’re four people and that’s how many [congressional] votes they got.” Ocasio-Cortez responded on Twitter: “That public ‘whatever’ is called public sentiment. And wielding the power to shift it is how we actually achieve meaningful change in this country.”

The cause for this exchange was a debate over emergency funding to lessen the horrors at the southern border. In June, the four progressive freshmen voted against the original spending bill Pelosi ushered through the House, fearing what CBP and the Trump administration might do with the money. While Pelosi may have been miffed, their resistance had no legislative effect, as she pointed out in the Dowd interview. But she was embarrassed when the bill reached the Senate, where majority leader Mitch McConnell passed a version stripped of the Democrats’ existing spending restrictions. With conservative Democrats forcing a choice of no bill or the Senate bill, Pelosi chose the latter, triggering opposition from 95 Democrats, with progressive leaders publicly scouring the conservative members.

“Some of you are here to make a beautiful pâté,” Pelosi said, “but we’re making sausage most of the time.”

The truth is, of course, that Democrats aren’t making the sausage—any dish they pass to the Senate gets fouled by McConnell—and with or without the border bill, tension between Pelosi and the four newcomers was inevitable. AOC, the most famous among them, burst into national attention by upsetting Pelosi’s likely successor in a Democratic primary and joining a Sunrise Movement sit-in in the speaker’s office to demand action on a Green New Deal. Her three compatriots have also challenged the leadership, taking positions to the left of the party line on issues from Israel to impeachment. The intense public criticism they’ve received often sparks concern over the four legislators’ safety, especially in the case of Omar, who has been the object of constant nationalist and Islamophobic tirades.

It’s easy to see the conflict as personal: the veteran versus the freshmen, the inside powerhouse versus the outside insurgents, the old ways of Washington versus the new politics of Twitter. But fundamentally, Pelosi and the squad have conflicting missions. The speaker’s job is to keep Democrats together, consolidating the majority in the House while setting the stage for Trump’s defeat. The young insurgents, by contrast, spearhead a broad movement demanding bold changes in the party and the country. They champion and model grassroots organizing that scorns the big-money politics of the Democratic establishment. Ocasio-Cortez is quite open about supporting efforts by Justice Democrats—a group that will challenge House Foreign Affairs Committee Chair Eliot Engel (D-NY) and eight-term representative Henry Cuellar (D-TX) in the next election cycle—and others to replace incumbents who stand in the way. That—not their work as legislators—is what sparks Pelosi’s ire.

As legislators, the group has impressed with their diligence in preparing for hearings and their pointed questioning of administration witnesses. They have not whipped votes against a major leadership priority nor forced a caucus battle over launching impeachment, which Pelosi opposes. They chose not to assail Pelosi when she dismissed Medicare for All and the Green New Deal as “enthusiasms” and “exuberances.”

Pelosi, by contrast, is focused on consolidating and expanding the Democratic majority. Her commitment to protecting incumbents was expressed by the Democratic Congressional Campaign Committee, essentially the speaker’s vehicle, when it announced it would ostracize any campaign houses or operatives that worked for a challenger to a sitting Democrat. No small part of this is about money. When incumbents face primary challenges, they are less likely to contribute their dues to the DCCC. That makes Pelosi’ s task as the most prodigious Democratic fundraiser all the more difficult.

Beyond that, Tlaib and Ocasio-Cortez wave a particular red flag by openly identifying as democratic socialists. Trump and Fox News have giddily made the latter the face of the Democratic Party while bloviating about Democrats’ turning the United States into Venezuela, and Republicans clearly plan to make charges of socialism and extremism central to their 2020 campaign message. Pelosi’s public dismissal of the squad is designed to make clear that the insurgents are not the leaders of the party, that Trump’s red baiting is ridiculous, and that the Democrats are not as “extreme” as the right claims.

An old truism in Washington holds that Republicans fear their base, while Democrats scorn theirs. That now is changing. Movement activism—younger, more diverse, and more organized than in recent years—demands more from politicians seeking support. In the House, a stronger and larger Congressional Progressive Caucus—including chairs of 14 House committees—wields real muscle. And at the presidential level, progressive ideas and energy drive the Democratic primary.

Despite her shots at the dissenters, Pelosi probably knows that the progressive insurgency isn’t going away. It is, in fact, vital to the mobilization of key Democratic constituencies. To consolidate the party, Pelosi should be working to empower rather than suppress this new energy. She could direct it toward exposing the pervasive corruption of the Trump administration while passing message bills that dramatize what could change under full Democratic control. HR 1—the landmark electoral reform bill to increase voter access and campaign equity—exemplifies that task. But Pelosi could go further by front-loading popular progressive reforms. The $15 minimum wage, which should have been passed in the first 100 days, is only now gaining a place on the calendar. Instead of scorning the Green New Deal, Pelosi could have pushed legislation to establish a Joint Congressional Committee with a mandate to act on climate change. McConnell’s refusal to consider it in the Senate would have dramatized the choice for the 2020 election.

Regarding the blowup with the young progressives, Pelosi told the press: “I have no regrets about anything. Regrets is not what I do.” By catering to the cautions of more conservative House members and publicly dissing the young progressive stars, however, she risks weakening efforts to energize young voters and activists in 2020. Hopefully, Pelosi and the “squad” will meet together soon to call a cease-fire and agree to disagree. But the fundamental argument—over what the Democratic Party champions, how it builds its campaigns, and who it is prepared to fight for—has only just begun.

Robert Borosage is a leading progressive thinker and writer. First published at The Nation.