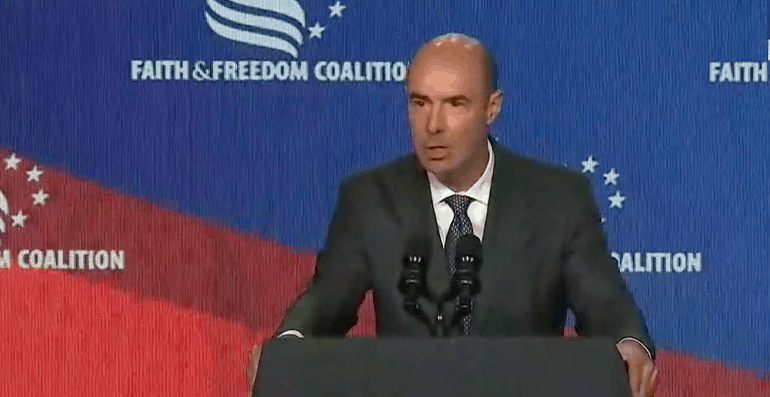 Donald Trump: billionaire of the people. When he ran for office, he said, “The American worker will finally have a president who will protect them and fight for them.”

And how’s that working out for the American worker? Not very well, actually, not very well. When it comes down to picking sides – standing up for workers’ rights or lining the pockets of CEOs and shareholders – Trump aligned himself and his policies with the fat cats. This cost workers money and safety. The truth is that American corporations got a president who protected them and fought for them.

That is who Trump chose to protect wage earners – a corporatist so egregious that when former President George W. Bush wanted Scalia as Labor Department solicitor, Bush had to give him a recess appointment because Republicans in the Senate balked at approving him.

This isn’t a glitch. It’s a pattern. Although Trump is fond of surrounding himself with union members and asserting that they love him, he doesn’t really like unions, especially ones that challenge him or dare to question his lies.

Remember how he personally attacked Steelworker Chuck Jones who exposed Trump and Pence for claiming to save 1,100 jobs at Carrier when they really preserved only about half that many – and then only after a grant of $7 million from the taxpayers of Indiana?

That’s not Donald Trump. He supported Mark Janus, an Illinois government employee who wanted everything for nothing. Janus was fine with collecting the higher wages that the labor union representing him secured for workers, but Janus didn’t want to contribute one red cent for that representation.

So with right-wing corporate billionaires picking up the tab for him, Janus took his case to the U.S. Supreme Court, which ordered unions to provide workers like Janus with essentially a free lunch. That is, the court said unions must represent freeloaders like him, but those workers don’t have to pay anything for all they get, no dues, no fees, no nothing.

Of course, there is no such thing as a free lunch. The whole point of Janus’ and the billionaires’ court crusade was to bankrupt and try to kill unions. And Trump was on their side.

If Trump really were the billionaire of the people, he’d have stood with the union. That’s who Trump promised that he would protect, the organization of average people trying to earn an honest living and standing up to big government and big corporations.

That was in June of last year. Just last week, Trump went to court seeking enforcement of his executive orders restricting unions representing federal workers and enabling him to quickly fire workers. The unions contend Trump does not have this authority. This is not settled in court yet, but Trump is asking a judge to let him impose the orders before it is.

That sounds like a president using all of the power of big government to step on the tens of thousands of little guys who do the grueling work, day after day, to ensure the federal government serves the American people reasonably well.

There’s even more. So much more.

And then there are his labor secretary choices. First he wanted Andy Puzder, CEO of the restaurant corporation that owns Hardee’s and Carl’s Jr., an opponent of raising the minimum wage who said he preferred machines to humans. Puzder withdrew, and Alexander Acosta took over until he was forced to resign last month as a result of the unconscionable plea deal he gave an accused molester a decade ago when Acosta was a federal prosecutor.

Now the interim secretary is Patrick Pizzella, who lobbied for years to prevent Congress from extending minimum wage requirements to the Northern Mariana Islands, a commonwealth of the United States, where workers were paid as little as $1 an hour but the corporate bosses got to mark the merchandise produced there as Made in America.

I guess that’s how you Make America Great Again, huh?

Now, Trump has picked Scalia, son of the late, anti-worker Supreme Court justice. This is the guy who killed a proposed ergonomics rule to protect workers against injures from repetitive motions, denigrating the research as “junk science” and “quackery.”

This is the guy who argued that the Occupational Safety and Health Administration (OSHA), an agency of the Labor Department, had no authority to regulate worker safety at SeaWorld after a 12,300-pound orca that had killed twice before attacked and drowned a trainer in front of hundreds of horrified children.

This is the guy who stopped the fiduciary rule that would have required brokers to act in clients’ best interest rather than brokers’ personal financial benefit by forbidding brokers from recommending investments that paid brokers big commissions but provided clients with low returns. This corrupt practice costs workers and retirees about $17 billion a year.

This is the guy who persuaded an appeals court to force card dealers in Las Vegas to split the tips they earn with their supervisors.

This guy is among the lawyers representing a petroleum producers’ trade association that is suing to overturn a California regulation calling for worker participation to improve refinery safety. The state passed the legislation after a refinery fire in Richmond, Calif., sent 15,000 nearby residents to hospitals and doctor’s offices for treatment, mostly for breathing problems. The lawsuit was filed in July, just days before an explosion and fire at an ExxonMobil refinery in Texas that injured 37 people.

Scalia is a corporate shill. And he’d be reporting to Trump, whose slavish support of corporate bosses over working Americans has revealed he’s nothing more than a poser in a red MAGA baseball cap.