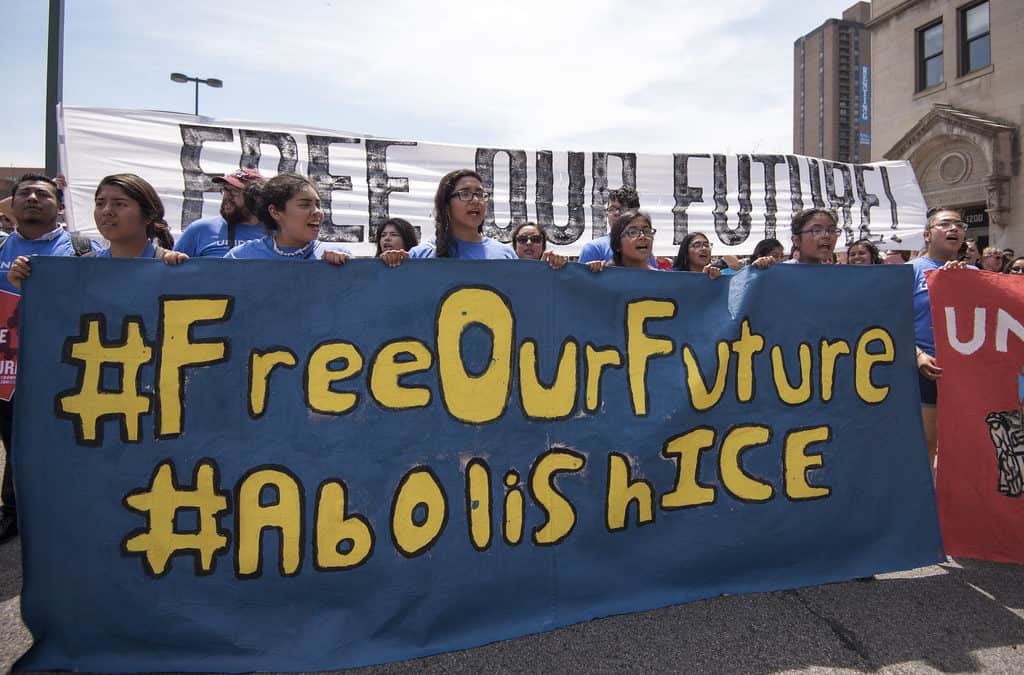 As I stepped inside the Cannon House Office Building on a Tuesday in July, I felt like I was taking a step towards a more just world. The night before, when I told my mother I planned to participate in a “Never Again” protest as part of #JewsAgainstICE, she had one question: “What exactly are their demands?”

That question was answered in the Cannon Building’s rotunda, as we chanted:

To most of America, “Abolish ICE” is a cry of the far left. Even Americans who dislike Trump’s attacks on undocumented immigrants wouldn’t necessarily tell you that ICE should be abolished; that seems far too radical.

They’re forgetting that ICE is actually pretty new. It was only created in 2003, replacing the Immigration and Naturalization Service (the same agency responsible for the internment of Japanese-Americans in the 1940s).

Since its creation, ICE’s budget has almost doubled, and its activity has expanded to triple the number of agents it employs. This expansion is shocking — and unwarranted. All evidence suggests that immigrants are far from the national security threat the Trump administration claims they are. Regardless of status, they’re more law-abiding than native-born citizens.

And time and time again, immigration has been shown to have a net-positive effect on the U.S. economy, from growing tax receipts to increasing wages for native-born residents. In fact, undocumented immigrants typically pay more of their income in taxes than your average millionaire.

More noteworthy than the economics, however, is that the individuals targeted by ICE are people — and all people are entitled to basic conditions of safety and for themselves and their families.

When the majority of these immigrants are fleeing violence with roots in U.S. intervention in Central America, the moral responsibility to offer safe haven becomes even more pressing. When government agencies neglect this responsibility, we all lose some of our humanity.

What calls to abolish ICE actually do is beg the question: Why do we need an immigration system dedicated solely to terrorizing immigrant communities?

Threats of ICE raids prevent undocumented people from going to work or sending their kids to school. Those in detention are denied access to basic hygienic products, subjected to severe overcrowding, and experience all manner of abuse. Several children have died.

We spend about $7 billion a year on ICE. What would happen if we instead invested those funds in resettling asylum-seekers, or hiring more staff to process asylum applications? What if families fleeing violence in Honduras or Guatemala had to wait only a few weeks to find out if they could immigrate legally, as opposed to the current average of almost two years?

The U.S. carried out over a quarter million deportations last year. The $7 billion that funded these actions

could have been used instead to resettle at least that many refugees (over 11 times what the U.S. accepted last year). It could also almost triple the funding of the government office that naturalizes around 700,000 new citizens each year.

Which is more radical: Investing in communities that strengthen our country and honoring basic human decency? Or continuing to fund an agency that’s literally caused the death of children?

As a concerned Jewish American, I believe none of us are safe until we’re all safe. We should be focusing our resources on welcoming new immigrants and helping them access the rights of citizenship — not subjecting them to detention and deportation.

A better world, for immigrants and for everyone, is within our reach. ICE just isn’t a part of it.

Rachel Hodes is a Next Leader at the Institute for Policy Studies. Distributed by OtherWords.