The New Populism Is A Fight For America's Values 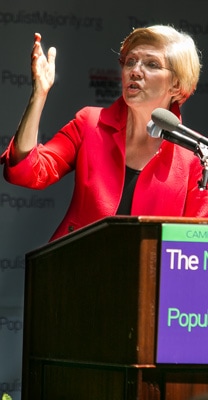 This speech was prepared for delivery today at The New Populism conference in Washington.

Thank you, Bob Borosage and Roger Hickey for all your hard work, for inviting me here today, and for featuring my book, "A Fighting Chance."

I wrote this book out of gratitude – gratitude to my parents who worked so hard and had so little. And gratitude for an America that gave a kid like me a fighting chance.

I’m told you’ve spent much of the day talking about populism – about the power of the people to make change in this country. This is something I believe in deeply.

In 2009, I was fighting hard for a new consumer agency that would level the playing field for families, by preventing the big banks from pushing people into loading up on credit cards and mortgages with tricks and traps. As you probably remember, the big banks hated the idea. For over a year, they spent more than $1 million dollars a day lobbying Congress to stop financial reforms.

And because the people were with us, we won that fight.

And it matters. That little agency has been up and running for only a couple of years, but already it has forced the largest financial institutions in this country to return more than $3 billion to people they cheated. That’s how we can make government work for people!

Throughout our history, powerful interests have tried to capture Washington and rig the system in their favor. From tax policy to retirement security, the voices of hard-working people get drowned out by powerful industries and well-financed front groups. Those with power fight to make sure that every rule tilts in their favor. Everyone else just gets left behind.

Just look at the big banks. They cheated American families, crashed the economy, got bailed out, and now the six biggest banks are 37 percent bigger than they were in 2008. They still swagger through Washington, blocking reforms and pushing around agencies. A kid gets caught with a few ounces of pot and goes to jail, but a big bank breaks the law on laundering drug money or manipulating currency, and no one even gets arrested. The game is rigged – and it’s not right!

But it isn’t just the big banks. Look at the choices the Federal government makes: Our college kids are getting crushed by student loan debt. We need to rebuild our roads and bridges and upgrade our power grids. We need more investment in medical research and scientific research. But instead of building a future, this country is bleeding billions of dollars in tax loopholes and subsidies that go to rich and profitable corporations. Many Fortune 500 companies, profitable companies, pay zero in taxes. Billionaires get so many tax loopholes that they pay lower tax rates than their secretaries. But they have lobbyists – and their Republican friends – to protect every loophole and every privilege. The game is rigged – and it’s not right!

Or take a look at what’s happening with trade deals.

For big corporations, trade agreement time is like Christmas morning. They can get special gifts they could never pass through Congress out in public. Because it’s a trade deal, the negotiations are secret and the big corporations can do their work behind closed doors. We’ve seen what happens here at home when our trading partners around the world are allowed to ignore workers rights and environmental rules. From what I hear, Wall Street, pharmaceuticals, telecom, big polluters, and outsourcers are all salivating at the chance to rig the upcoming trade deals in their favor.

Why are trade deals secret? I’ve heard the supporters of these deals actually say that they have to be secret because if the American people knew what was going on, they would be opposed. Think about that. Real people – people whose jobs are at stake, small business owners who don’t want to compete with overseas companies that dump their waste in rivers and hire workers for a dollar a day – those people, those people without an army of lobbyists – would be opposed. I believe that if people across this country would be opposed to a particular trade agreement, then that trade agreement should not happen.

The game is rigged. The rich and the powerful have lobbyists, lobbyists and lawyers and plenty of friends in Congress. Everyone else, not so much.

Now we can whine about it. We can whimper. Or we can fight back. Me? I’m fighting back.

This is a fight over economics, over privilege, over power. But deep down, this is a fight over values. Conservatives and their powerful friends will continue to be guided by their age-old principle: “I’ve got mine, the rest of you are on your own.”

But we’re guided by principle, too. It’s a simple idea: We all do better when we work together and invest in our future.

We know that the economy grows when hard-working families have the opportunity to improve their lives. We know that the country gets stronger when we invest in helping people succeed. We know that our lives improve when we care for our neighbors and help build a future not just for some of our kids – but for all of our kids.

These are progressive values. These are America’s values.

We believe that Wall Street needs stronger rules and tougher enforcement, and we’re willing to fight for it.

We believe no one should work full-time and live in poverty, and that means raising the minimum wage – and we’re willing to fight for it.

We believe people should retire with dignity, and that means strengthening Social Security – and we’re willing to fight for it.

We believe that a kid should have a chance to go to college without getting crushed by debt – and we’re willing to fight for it.

We believe workers have a right to come together, to bargain together and to rebuild America’s middle class – and we’re willing to fight for it.

We believe in equal pay for equal work – and we’re willing to fight for it.

We believe equal means equal, and that’s true in the workplace and in marriage, true for all our families – and we’re winning that fight right now.

We – the people – decide the future of this country.

These are our shared values. And we are willing to fight for them.

This is our fight!