Reagan Already Did The "Grand Bargain" (And No One Cared) 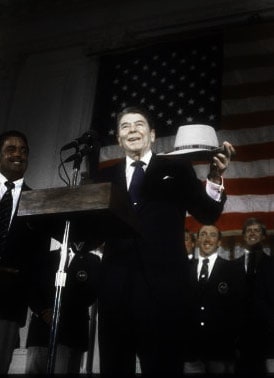 Today, The Week published my essay "Why Obama's Legacy Doesn't Need a Grand Bargain." While austerity ideologues like Alan Simpson are insisting that President needs a "grand bargain" -- swapping entitlement reform for tax reform -- to have a great historical legacy, I showed that 1) "history yawns at budget deals" and 2) neither Social Security nor Medicare face imminent collapse. Even if you believe retirement cuts are eventually necessary, Obama can let his successors make that call without any damage to the country or his legacy.

In researching the piece, I was reminded that everything that Obama is being pressured to do in a "grand bargain," Reagan already did. How did that turn out?

On tax reform, the bipartisan deal Reagan achieved in 1986 looks much like what is generally proposed today: closing loopholes and deductions while lowering tax rates.

There would be potentially significant differences: Reagan's reform was designed to be revenue-neutral, while Obama had made it clear any deal would have to raise additional revenue. And Reagan got a very flat (aka regressive) tax structure with only two income brackets of 15% and 28%. Obama has spent his first term making the tax code the most progressive since 1979, and while he has entertained lower rates as part of broader reform, it is implausible he would throw away his own achievement.

Nevertheless, the basic idea of reform through simplifying the code is parallel. So what happened when Reagan did it?

The heralded tax reform was not exactly treated as sacrosanct by Congress. More than 15,000 changes in tax law have happened since unravelling the promised simplification.

Whatever the merits of simplification might be, it's not a huge incentive for President Obama to take political risks on a messy compromise on a project that has little chance of remaining in place.

What about Social Security? Bipartisanship romantics like to talk about Reagan's 1983 reforms which extended the solvency of Social Security by increasing the retirement age, taxing the wealthy, and futzing with the cost-of-living adjustment. That's basically what the austerity posse is calling on Obama to do now.

Those reforms worked as intended -- Social Security has been solvent ever since -- though it amounted to a benefit cut for many. You could still argue it was necessary because the Social Security trust fund was on the verge of running a deficit which could have delayed the processing of benefits in the short-run -- but not forced any immediate benefit cuts -- and weakened the stability of the system in the long-run.

It was only 1980 when the Social Security trustees delivered the warning about the projected shortfall. After a couple of years of Reagan floundering with more radical Social Security changes, a more modest deal was struck.

You could argue that Reagan's Social Security reform worked out better than his tax reform. But neither one created a historic legacy for him. Reagan is not "The Man Who Saved Social Security" or "The Man Who Made Everybody Love IRS." He simply patched up Social Security at the point when it was widely agreed it needed a patching. That's housekeeping, not greatness.

Today, we are not at the point where everyone agrees Social Security needs a patching, because projections can change.

But if the projections look dire eight years from now, what the Reagan experience shows us is, they'll fix it.

And then everyone will forget it about it.