When We Organize, We Win 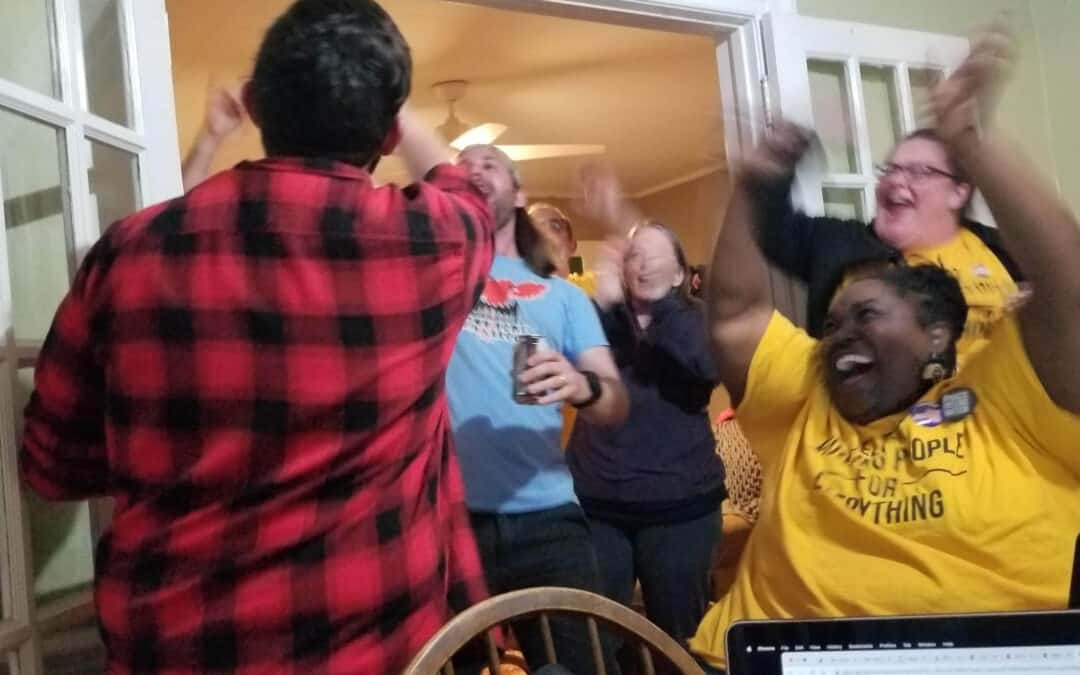 "Together, we will create new ways that people can engage in all parts of public life so that we can equally get to imagine and shape the structures in which we live." - People's Action Long-Term Agenda

The 2022 midterm elections are historic not only because they turned back the predicted “Red Wave” of Republican victories, but because they demonstrate a resilient groundswell for change in this country.

To People’s Action, elections are a vehicle for change: to bring justice to those who don’t have it. We are far from the conditions we need, but these midterms show us the door is open, and people are ready for change. The time is ripe to organize. 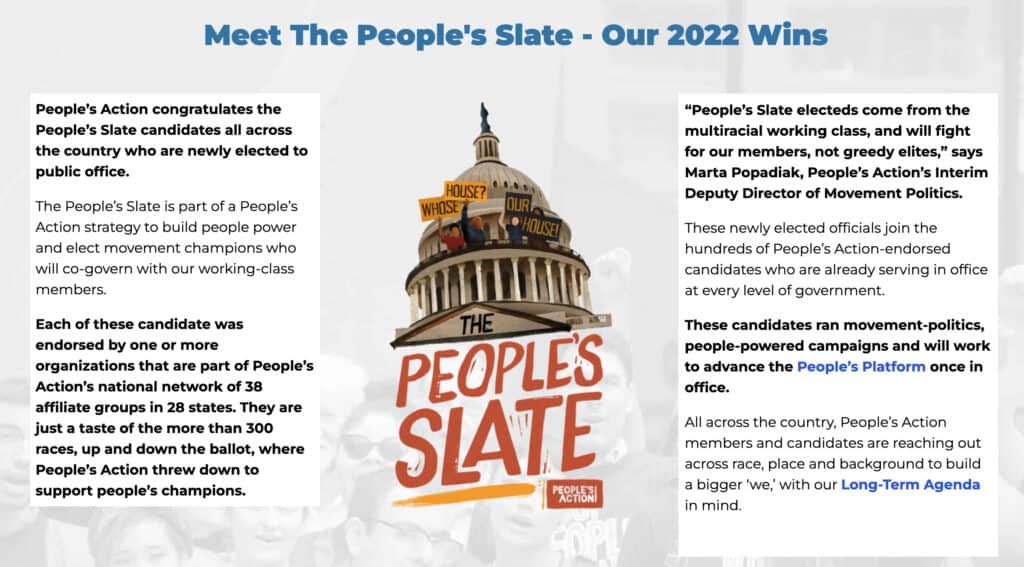 When voters and candidates take organizing seriously, we win. When we have vulnerable, courageous conversations with neighbors about the sources of pain in our lives, we win. And when we put forward a hopeful, bold vision, we can defend our freedoms from the people attacking them.

This is exactly why the People’s Action’s Movement Politics program exists: to create the kind of people power our country needs to break the grip of the far-right and ultra-wealthy on our public life.

People’s Action recognized over a decade ago, when we created our Long-Term Agenda, that if we want a multiracial democracy that works for all of us we have to build it ourselves - with a new kind of movement-driven politics. We must elect leaders who will “co-govern”: work with, and be accountable, to the communities they represent. So we established a C4 organization to build political capacity and encouraged all of our member organizations to do the same. 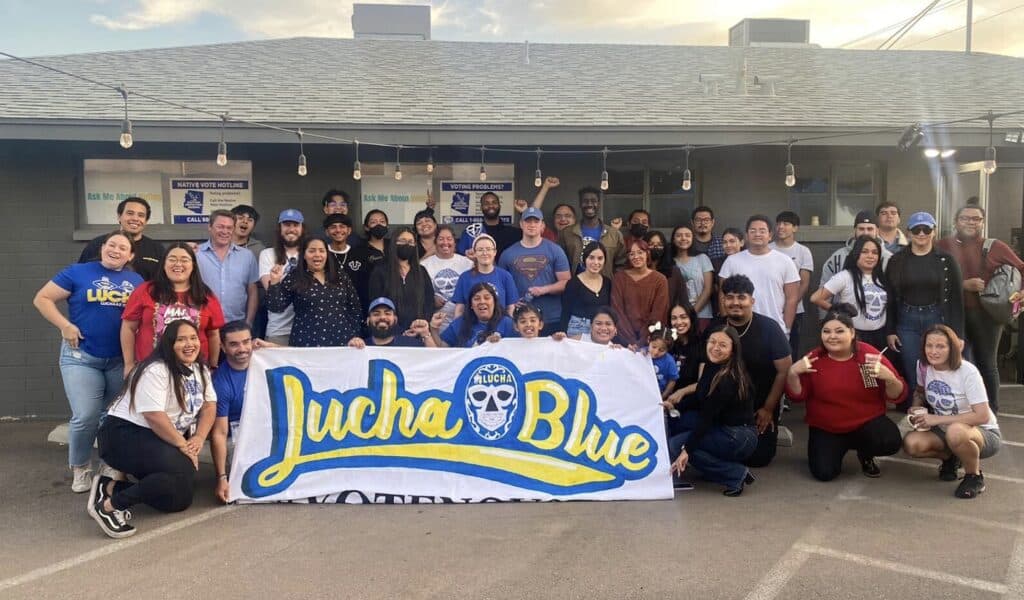 People’s Action, Pennsylvania Stands Up and Pennsylvania United went all in to elect John Fetterman to the U.S. Senate, Summer Lee to the U.S. House of Representatives and Josh Shapiro as governor. Not only does this strengthen Democrats’ hand in the U.S. Senate, it gives them more governing power in state, possibly even control over the state legislature, which Republicans have dominated for years.

Among the state legislators elected with our support are Rick Krajweski, Izzy Smith-Wade-El, Bridget Kosierowski, and Johanny Cepeda-Freytiz. Lee and Krajewski both got their start as candidates after participating in People’s Action-supported training programs. 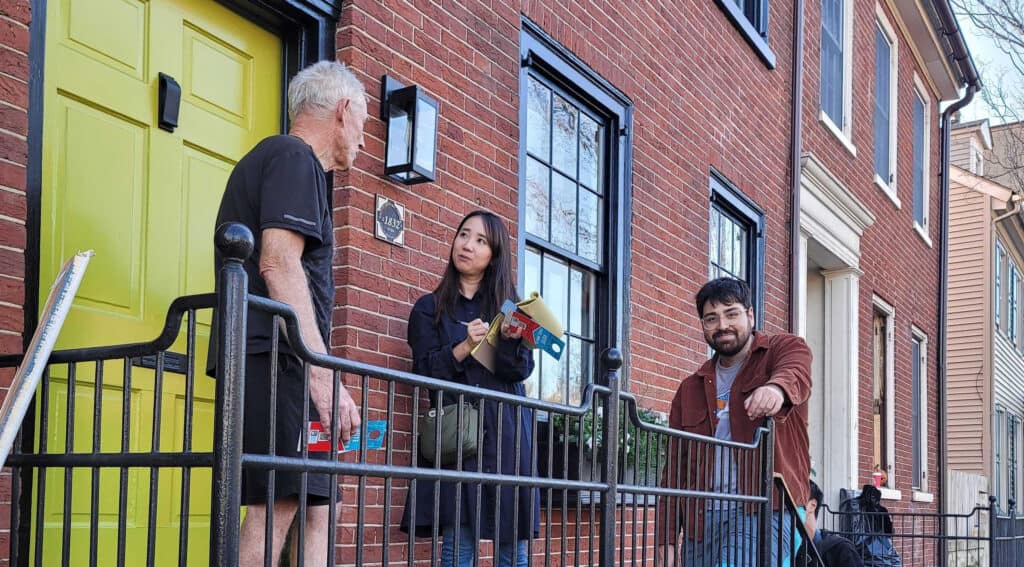 It’s not just about these numbers - it’s about the hearts and minds we change with every one of these conversations, making real human connections to turn back the tide of hate.

This is the People’s Action approach, what we call deep canvassing, and where our members like LaShawn make all the difference. 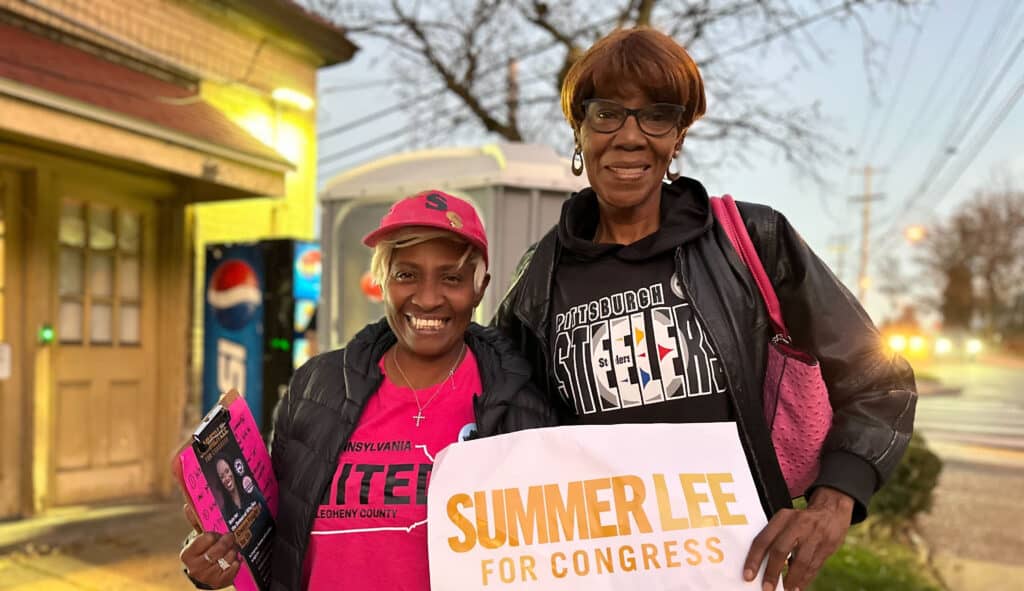 LaShawn, shown here on the left with her friend, showed up to poll-watch and door knock a day after her husband passed away - in part because he couldn’t afford lifesaving medicines.

“What makes me be out here knocking doors for Summer Lee after my husband died on Sunday morning is she’s for real people,” LaShawn told us. “It’s time for co-governing. We need someone who will seek the desires of the community and make and change for working class people.”

Michigan People’s Campaign and People’s Action reached 216,369 voters through a combination of 847,945 texts, knocks and calls. This puts Michigan within distance of a governing trifecta - control of the governor’s office and both houses of state legislature. For more than three decades, Republicans have used their control over the legislature to sabotage Democratic initiatives to improve communities. That era may now be over.

“It’s not enough to fight against what you don’t want,” says Ken Whittaker, executive director of the Michigan People’s Campaign. “We did that for four years. Now we get to fight for the things we do want. This is what real people power looks like.” 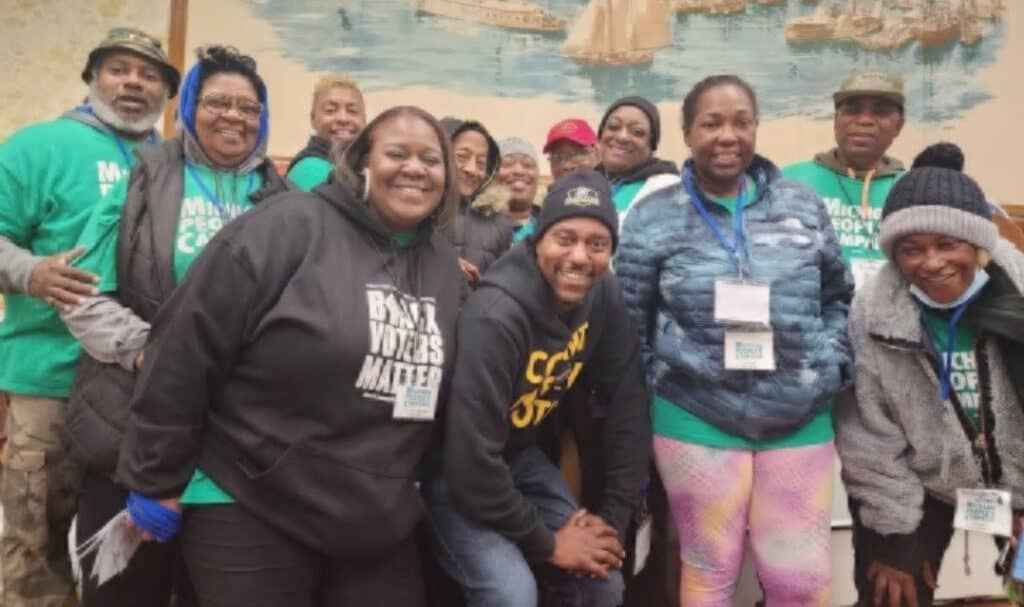 And there’s more - Down Home North Carolina helped block a potential Republican supermajority in the state legislature, by flipping hotly contested districts. In one of these, House District 73, they helped elect Diamond Staton-Williams, after knocking on 42,134 doors and holding 7,757 deep canvass conversations. Staton-Williams won in an upset by 425 votes. This effectively preserves Democratic Governor Roy Cooper’s veto powers, and with it the ability to block Republican efforts to strip the state of reproductive freedoms and other rights. 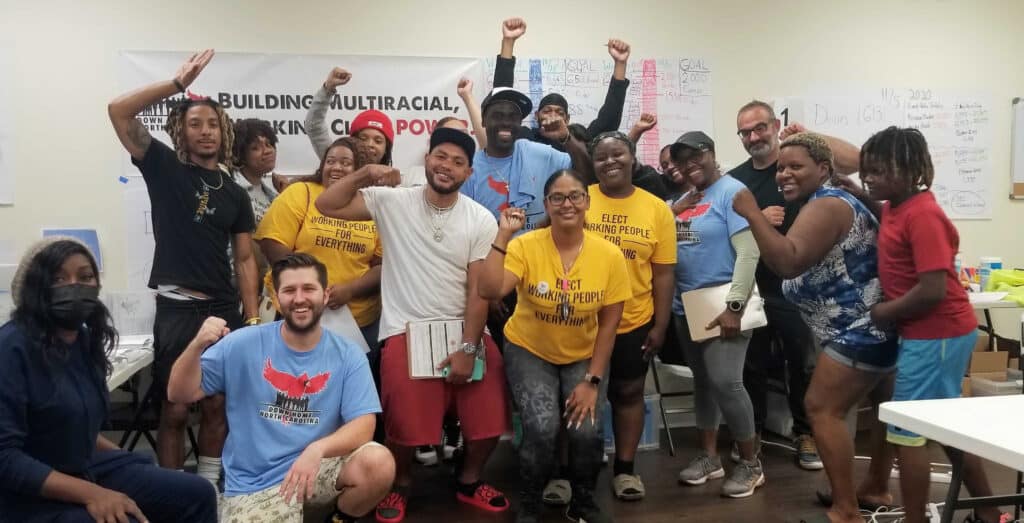 These victories are especially important because they break Republicans’ decades-long stranglehold on state legislatures, which they have used to gerrymander voting districts, and pass pro-corporate, anti-voter, anti-women, anti-LGBTQ+ and anti-immigrant legislation.

Republicans and the ultra-wealthy have long taken their control of state legislatures for granted; thanks to People’s Action, they no longer can. This marks a way forward where we, through organizing, can take democracy back from those who think it should only serve the wealthy and powerful.

The enemies of democracy have many assets on their side. They benefit from the conservative majority of unelected judges on the Supreme Court, and seemingly unlimited reserves of dark money from billionaires like Peter Thiel and Chicago industrialist Barre Seid, who recently donated $1.6 billion to support rightwing causes.

But they don’t have organized people. We do. We are so proud of every one of these newly-elected movement champions, and of everyone who ran, knocked on doors, and made phone calls to support them. Thank you.  Organizing won these races. And while we didn’t win everything, we fought like hell and will continue to play the long game! 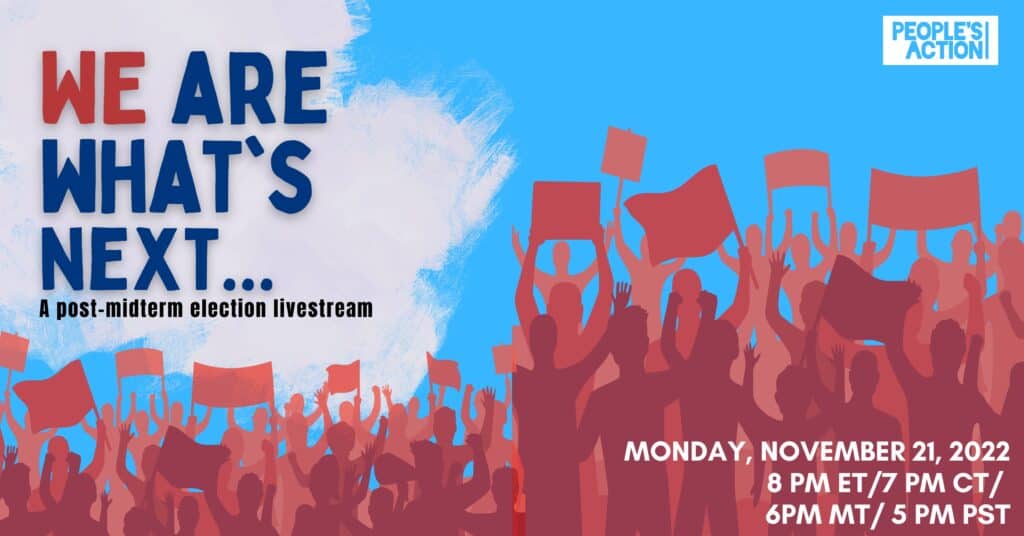 On November 21, we’ll host a special livestream to make sense of it all and make our co-governing plans with candidates who won and lost. We'll also tell the world about our Organizing Revival and plan to win the future we deserve.

We hope to see you there!

Sulma Arias is executive director, and Marta Popadiak is movement politics director of People’s Action, the nation’s largest network of grassroots power-building groups, with more than a million members in 30 states.