A Letter to a Young Organizer 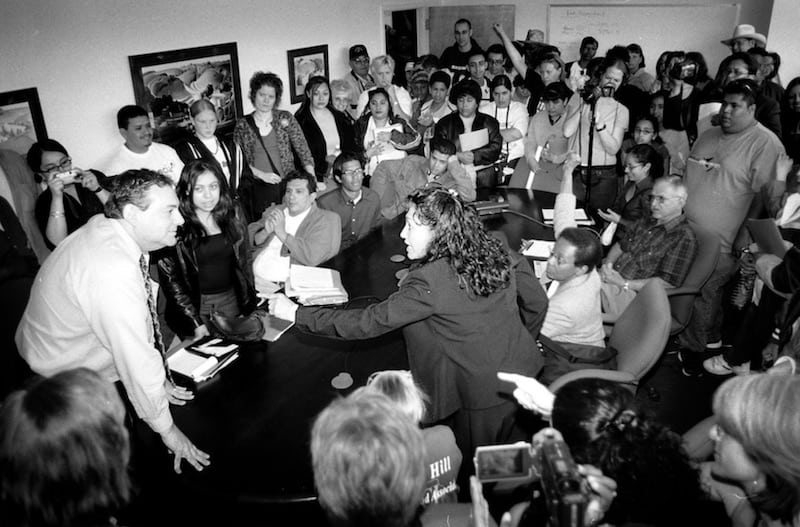 There’s no getting around it. Organizing is hard. But the context you are organizing in right now? It’s a whole different thing.

When I was coming up, the expectations felt big. People in the neighborhood were being screwed seven ways to Sunday. So, each night we’d knock 50 doors, have a dozen conversations, and go deep with three or four folks - sign them up as members committed to hosting a house meeting. We were expected to build a neighborhood base, organize actions, put 200 people in a room every couple months, and win.

None of this was easy. And, it’s different from what’s required today.

You are organizing in an era of constant crises. You feel the weight of a country coming apart at the seams. You have to build a base, develop community leaders, engage in local fights AND you feel called to spring into action as soon as another Black person is killed by police, even if a thousand miles away, when children are separated from their parents at the border, a Supreme Court seat opens, a pandemic strikes.

The results from Georgia come in. You’ve pulled off what they say could not be done. You feel proud. Hopeful, even. Finally - after four years of Trump - maybe you can be more at ease, if just for a bit.

Apparently in today’s America, “a bit” lasts around six hours. Because before you catch your breath, when you should be celebrating, armed white supremacists storm the U.S. Capitol.

The celebration and rest will have to wait. Another of the most important moments in American history is unfolding on your watch.

All of this because you are no spectator. You hold the beauty and the responsibility of being an organizer. You know good and well you can make a difference.

And still, you gotta hit 50 doors a night, have those 12 conversations, sign up a few new members, move people into action or whatever the expectations are in your organization (and in the context of a pandemic). And most importantly, you need to teach others to do all of these things too.

If all the pivoting of this era means you can’t be doing these things, you wonder. Am I making the right choices? What are the costs of constantly reacting? What is my compass in this chaotic period?

Twenty-five years into organizing, I ask the same questions. When unsure, I go back to the fundamentals, as I understand them. I’ve had periods where I’ve been grounded in these, and times I’ve lost my way. The most fulfilling have been marked by a deep commitment to these fundamentals.

1. Start Where People Are At

The best organizing starts not with mobilizing, but listening. Always be listening, seeking to understand people’s most pressing struggles, greatest hopes, and what is front of mind for them.

The first public meeting I organized in Chicago was an accountability session with the city’s Deputy Director of Rodent Control (yeah, I too didn’t know there was such a thing).  Taking it to the rats is not why most people get into organizing, but that’s what people wanted. And if we aren’t organizing around what people want — and they wanted the rats gone -  are we really organizing? Or are we doing something else?

2. It’s Not Where People Start, but Where They Could End Up

Organizing is the process of creating a path for the still waking. We are not here to organize the converted.

In her new book, The Purpose of Power, Alicia Garza spells this out plain as day: “We can’t be afraid to establish a base that is larger than the people we feel comfortable with. We have to reach beyond the choir and take seriously the task of organizing the unorganized — the people who don’t already speak the same language.”

A good one-on-one meeting helps you understand someone’s path, their motivations, and what is keeping them from realizing their fullest potential. Done right, they can literally be life-changing. A conversation that starts with someone wondering why they even said “yes” to the meeting, turns into a gift — revealing things about themselves and society they had never seen so clearly until you, the organizer, came into their life. What an amazing thing to be able to offer to another person.

The dizzying pace of today’s organizing can tempt us to skip this practice, because we “have to get down to business.” But this is the business. Something profound about organizing will be lost if we don’t continue to invest in the art and craft of a good one on one.

4. Create the Arena for People to Become Leaders Together

As organizers we create the arena for people to become leaders. From the house meeting to the biggest direct action you ever organize, you are building opportunities for people to step into leadership.

Little builds the connective tissue of it all like going into the battle together. Whether a protest outside the Mayor’s office, a direct action at the bank’s shareholder meeting, or helping lead a meeting with elected officials, these big moments advance our campaigns, but also transform us as individuals, and can transform entire organizations.

There’s an intensity to going into battle together. Going public is a risk. Taking that risk together builds bonds between each other and the organization. This allows us to take even greater risks, and hold together when the chips are down.

5. Don’t Do for Others What They Can (and Would Gladly) Do for Themselves

I’ll never forget my first public meeting. My mentor at the time, Mike Evans, noticed I was doing most of the work to set up the meeting. He pointed out that the people who showed up early could remain spectators, or they could be a part of making the meeting a success.

Picking up on the point, I invited folks to help set up tables and put up signs. They were happy to help, and they instantly became more invested in the meeting. Lots of small acts like this add up.

6. Life Is Hard, Winning Is Important

Securing victories — big and small — builds faith in the work. Wins provide evidence for members that the process of organizing — with all of the other demands on their time — does create real impact in their community. We have to be winning.

Nearly as important is celebrating the wins. A while back, one of the founders of National People’s Action, Anne-Marie Douglas, stopped by to share some stories. When asked what was something the organization did really well in her time, she paused, then said, “we always celebrated the victories. Always.”

It’s true. I remember as a young NPA organizer, when we’d win, the leadership would shut down the office and we’d head out to a bar or to the Italian joint around the corner. Hell, sometimes we celebrated the anniversaries of our victories.

Sometimes the wins are few and far between. When they come, enjoy them, and do it together.

These are some of the fundamentals that I try to return to. If you crave more grounding in these fundamentals, seek out that support. Find the great practitioner of the one-on-one meeting, the time-tested creator of the arena, the folks who know how to craft the campaign to win tangible and structural change. You’ll be surprised how thrilled they will be to hear from you.

We are in a critical period in the project of truly becoming an America that has reckoned and reconciled with all the contradictions between our founding words and so many horrific acts, and the structures that allow them to continue.

Many days, the work of becoming a new America is a beautiful thing. Other days, that progress is met with the hateful backlash that you would expect.

Because of this, organizing is as relevant as it has ever been, and as needed. And you are the young organizers doing it in this most critical period in our history.

You are an organizer. You bring not bread, but yeast. You are here to agitate and inspire more people to ask hard questions, to uncover hidden truths, to realize their power, and to do all of this with lots of other people.

What an amazing thing.