Blessed Be The Organizers 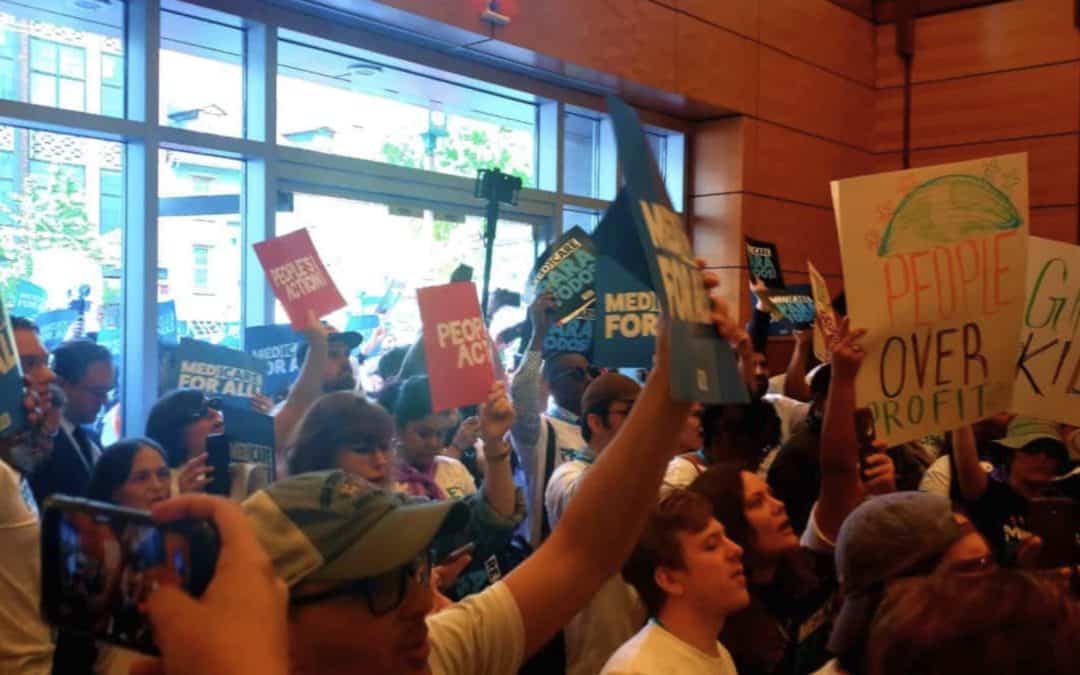 Like all of us, I’ve sorted through many feelings this week. And, there’s been one constant. Gratitude for organizers.

If you take organizers and the local institutions they’ve built off the table, Donald Trump is a two-term President. I feel certain of that.

In the fight to transform systems, they transform the human spirit along the way. I’m talking about honest to goodness organizers.

Organizers build credibility in the community, because they come from the community. Because they are in the community. They are curious about people, they listen and they show up, not just on election night, but 365. The organizer drives four hours when word breaks of a family farm foreclosure, quickly organizes neighbors when the Sheriff comes to evict, shows up at midnight when someone has been arrested but done nothing wrong, and even if they did.

For twenty-five years I’ve heard member after member tell stories about how “their organizer” showed up when they needed it most.

This kind of being present builds credibility. And organizers just spent a lot of that credibility convincing the community that we gotta get rid of Trump and elect Joe Biden and Kamala Harris. I am hoping the credibility that just got spent gets repaid with some change in people’s lives, but that’s a whole other thing.

Organizers did more than put this election in the win column. This victory was the coda on four years of organized resistance. Since Donald Trump was elected, organizers have showed up — plain and simple. That started the first day after Trump’s inauguration with the Women’s March, the single largest mobilization in American history.

When Trump called for the Muslim Ban, who got us to show up at airports across the country? Organizers.

Republicans came hard and fast for the Affordable Care Act. But local organizers in moderate districts organized constituents to flood Congressional townhalls. The ACA remains a thing because of the craft of organizing.

When the Trump administration began its policy of family separation, organizers at the border moved quick — organizers who have been holding it down with limited resources in tough conditions for decades. They provided the infrastructure for larger mobilizations and game-changing media coverage.

It was organizers who launched Families Belong Together, at its peak organizing 750 events nationwide on one day in June of 2018. From the Rio Grande to Antler, North Dakota, population 27.

In the midterms it was organizers who created the resistance energy that formed a blue wave.

Then COVID-19 hit, and organizers, many who have children and complicated lives, kept moving. And adapted. For most of us organizing is about face to face relationships and moving people to public action. COVID took those things away. And yet, organizers learned new tools, taught them to others, and transitioned canvassing from doors to phones. Many organizers can now damn near run a TV station, having become experts on organizing top-notch live streaming events.

Then George Floyd was murdered, a knee on his neck for nine minutes. This hateful act followed the murders of Breonna Taylor and Ahmaud Arbery. Even a pandemic wasn’t gonna keep people inside. And organizers hit the streets, trained others, framed demands, organized local campaigns, and helped a nation make meaning.

And this list barely scratches the surface. All-of-this on top of organizing mutual aid, local campaigns, building alliances, negotiating state politics, and more. I think most people who have never been an organizer can’t imagine the amount of human pain that you have to hold in this craft.

And if Donald Trump doesn’t get on out of the White House it will be organizers who will turn up the heat and escort him on outta there.

To me, you are saving America, you are birthing the next version of America. Truly becoming America was never going to be easy, and that becomes clearer by the day, but it is a hell of a lot more possible because of all the ways you keep showing up, being present, and agitating people to greatness.

Blessed the agitator; whose touch makes the dead walk;

Blessed the organizer; who discovers the strength of wounds;

Here’s to those who discover the strength in wounds.