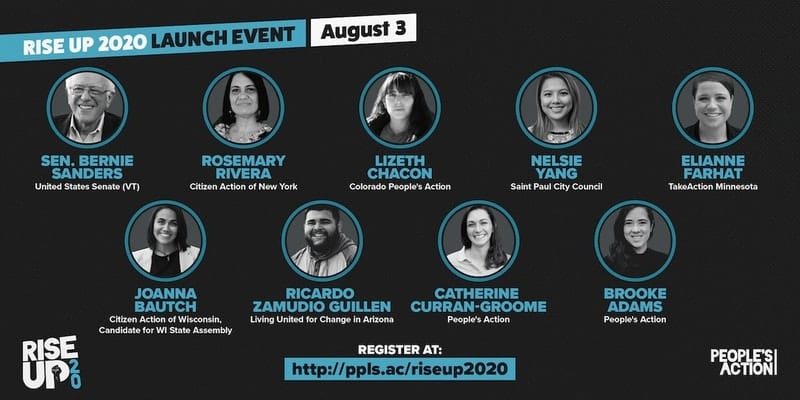 As a young organizer, I was told we shouldn’t engage in electoral politics - that it was dirty, and a distraction. But after a long run of not winning what we most needed, it became crystal clear that operating only in a landscape created by someone else was not getting the job done.

So ten or so years ago, folks at National People’s Action made a hard pivot - we began to take the beauty and power of community organizing into the electoral arena.  We started to do what we call Movement Politics: electing candidates who truly share our values, and who will co-govern with us. And it is happening.

Since 2016, we have helped elect more than 350 candidates. People’s Action has  already endorsed 73 candidates for public office in the 2020 late summer primaries and general elections with more to come.

This Monday, August 3, we will announce these endorsements and officially launch our volunteer election program, the Rise Up 2020 Campaign, in a special livestream event with Senator Bernie Sanders. We expect thousands of volunteers to join this launch - then hit the phones with us and do engaged text messaging to tens of thousands that same evening.

Our endorsed candidates include folks like Andru Volinsky, who is running for Governor of New Hampshire with Rights and Democracy & New Hampshire Youth Movement, and Nithya Rahman for Los Angeles City Council with GroundGameLA. All share our values, and believe in the country we can build together.

For a local or state candidate to be endorsed by People’s Action, the candidate needs to first be endorsed by one of our member organizations, and sign onto our People’s Platform. We only endorse in races where we will do actual work to help the candidate get elected, and we expect to endorse a total of around 150 candidates in this cycle.

Meanwhile, our newly created team of distributed organizers are recruiting, supporting, and developing volunteers. We sent 1 million texts and made over 35,000 phone calls over the past 7 days alone! And we have more than 1500 volunteers recruited to move this work over the next week.

This amazing work is led by Brooke Adams, a People’s Action organizer and trainer, who went to lead the Iowa field program and the Pennsylvania and North Carolina state programs for the Sanders campaign. Luckily for us, she came home to People’s Action, and is our new Director of Movement Governing.

On Monday night, Senator Sanders will speak alongside leaders from Colorado People’s Action, Citizen Action of New York, Living United for Change in Arizona (LUCHA), Take Action Minnesota, and Citizen Action of Wisconsin. And they’ll be joined by thousands of our members - and future members - from across the country.

We’ve come a long way from when we used to beat our heads against a wall trying to move an elected who, at the end of the day, just wasn’t gonna move.

Now we know that if they won’t move, we have the power to move them out, and help move in someone who comes from us.  For me and for People’s Action, Movement Politics is where it’s at.