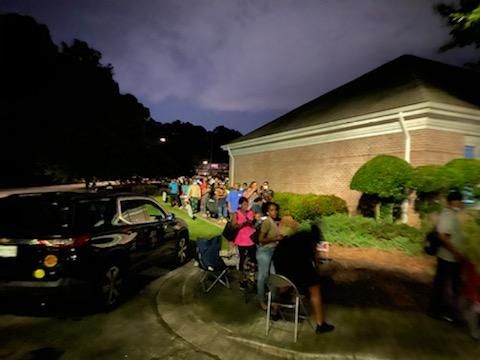 More in-person voting sites in metro areas. Better information about where polls have been relocated. More public education about how to vote from home and what to do if an absentee ballot doesn’t arrive—or arrives at the last minute. And no last-minute government decisions that confuse voters and undermine voting, such as imposing curfews before the polls close.

These are some of the takeaways from the nine presidential primaries that took place on June 2, the largest day of voting across America since the pandemic broke in mid-March, where most of the states and the District of Columbia responded by shifting to voting with mailed-out ballots rather than voting centered on local polling places as in previous elections.

The approaches taken in these states and districts varied and reflected the trends seen across the United States. Montana and Maryland mailed ballots to voters. Washington, D.C., and four states sent voters applications to get a mail-in ballot. Pennsylvania and Indiana left it up to voters to apply for an absentee ballot, get the ballots on time, and submit it on time to be counted.

The results were a spectrum of well-run to more-problematic elections. Montana, which is used to voting by mail, had higher turnout than its 2018 fall midterm. But many voters who were not used to voting from home, especially in metro areas, did not get ballots as expected. They went to vote in person, but often found traditional polling places closed. They ended up in long lines and sometimes faced hours-long waits, where social distancing could be challenging, and, in the worst case—in Washington—police were telling voters to go home because of a curfew.

These trends, both better and worse, offer lessons and warning signs for the fall’s elections.

“Overall, this is a dry run for November,” said Kristen Clarke, president and executive director of the Lawyers’ Committee for Civil Rights Under Law, which runs the nation’s largest Election Day hotline and fielded more than 5,000 calls for the primaries. “We’re bracing for high turnout that we will see in the November general election, and lessons learned from this primary season must guide states… to ensure that every eligible voter can have their voice heard.”

“It is clear that the pandemic is having an impact on virtually every aspect of the voting experience,” she said, noting that impact was apart from a curfew in Washington that was announced by a text alert on Election Day that “did not have an exception making it clear that voters can, indeed, continue to travel to cast their ballot.”

Voting in quasi-militarized settings was not confined to the nation’s capital. In Philadelphia, on election eve, the mayor announced a curfew that was slated to take effect an hour before its polls closed, but subsequently delayed it after an outcry by other city officials and activists. The curfews, which have never before occurred on an Election Day in recent times, were a response to looting that occurred after generally peaceful protests against police violence and racism. However, the curfews also come in a climate where the Republican Party, led by President Trump, has been repeatedly making false claims that voting by mail is rife with fraud.

“This is simply not true,” wrote the National Vote at Home Institute’s Amber McReynolds and MIT’s Charles Stewart III, both experts, for the Hill. They noted that the right-wing Heritage Foundation’s oft-cited election fraud database listed 204 cases and 143 convictions using mailed ballots in the past 20 years, where “about 250 million votes have been cast by a mail ballot.” That activity level is “about five times less likely than getting hit by lightning in the United States.”

But while partisan propaganda about voting by mail is only likely to increase as the general election nears, the nuts-and-bolts challenges of shifting to voting by mail in states that have not widely instituted that process is very much a work in progress. In that sense, the statewide and district primaries on June 2, as well as dozens of elections that will be held now through the summer, are microcosms of what is working and what needs to be fixed for the fall.

A Spectrum of States

The June 2 primaries featured jurisdictions with more and less experience running mail-based elections. On the most experienced side, Montana, where the senior statewide election official is a Republican, continued its practice of mailing all voters a ballot. More people voted for its 2020 primary than during the state’s November 2018 midterms.

“Sixty-three percent of active registered voters,” said Phil Keisling, the National Vote at Home Institute’s board chair and former Oregon secretary of state. “That’s higher than 41 states in their midterms in 2018. That’s the power of mailing everyone a ballot.”

While Montana was an example of how voter turnout will increase in states where voters have become used to voting from home, the experience in Midwestern and Eastern states that have not embraced voting from home until the pandemic was rockier was a different story—and not just because of the pandemic’s social distancing requirements or police presence due to widespread protests.

In Pennsylvania’s largest cities, Philadelphia and Pittsburgh, in Washington, D.C., in Baltimore, Maryland, and in Indianapolis, Indiana, election officials underestimated the number of people who sought to vote in person for any number of reasons: from not getting a mail-in ballot; to getting a ballot late and wanting to drop it off; to simply wanting to vote in a polling place.

While Pennsylvania’s top officials reported a “smooth election amid historic circumstances” as 1.8 million residents applied for an absentee ballot, “17 times greater than the number who applied” in its 2016 presidential primary, voting rights advocates manning election-protection hotlines observed a different experience. The Lawyers’ Committee said that 55 percent of the calls received on June 2 were from Pennsylvania—and from people unable to vote by mail.

The takeaway from the committee briefings, where its partners summarized what they were hearing from hundreds of observers, underscored that accommodating the fall’s voters will mean planning for high levels of voting from home—but still significant in-person voting at precincts. That conclusion is what emerges after hearing detailed reports of snafus.

“The big theme of the day is confusion,” said Ivan Garcia, civic engagement director for MakeTheRoadPA.org. “Voters are turning up to their old polling place and not always finding directions to the consolidated poll place that they should be going to. Because of the large number of voters at each poll, poll workers are having trouble finding voters in the poll books—if they even have the poll books. In the worst situations, they are being turned down and turned away so that they cannot vote.”

Garcia also said that many voters had not received a mail-in ballot—even though they said they had applied. When they turned up at vote centers, some poll workers were unfamiliar with the procedures to let them vote. (In some states, poll workers can look up that voter in an electronic poll book and cancel their mail-in ballot, allowing them to vote with a regular ballot. In other states, they must fill out a form to get a provisional ballot.)

“We are seeing voters who requested mail-in ballots who never received them,” he said. “They are turning out to their polling place to vote. And instead of voting provisionally, which is what is supposed to happen, they are being turned away as well. There have been lots of phone calls asking about the clarification about the deadlines for returning mail ballots based on the executive order that Gov. [Tom] Wolf signed yesterday [June 1]. The length of the lines is increasing as we get to the end of the day. There’s been problems in Pittsburgh and Philadelphia.”

“One thing we learned from our colleagues in Indiana is that even in these challenging circumstances in the Midwest and nationally, voters have really shown a quiet resolve to persevere and to exercise their right to vote today,” said Ami Gandhi, with the committee’s Chicago chapter, which was assisted by Common Cause in Indiana. “The majority of calls we received so far are people needing clarification on where their polling place is… Some voters, especially in Indianapolis, have been facing long lines and congestion… We’re also getting many questions about absentee ballots by voters not comfortable with voting in person.”

These comments reflect that some voters, in response to the pandemic, clearly want to vote from home—one trend that is likely to continue into the fall’s general election. Yet, at the same time, the comments also reflect that many voters who did not get an absentee ballot, for any number of reasons, still wanted to find a way to vote in person. (This was apart from police in some locations, namely Washington, telling voters to leave because of a pending curfew.)

The June 2 experience had other lessons. In Pennsylvania, where state law does not allow local election officials to start processing mail-in ballots before Election Day and the governor’s order will allow ballots postmarked by June 2 to arrive up to a week later and still be counted, the official results in some contests will not be known for days—which will recur this fall. It’s not known whether the state’s legislature will act to allow counting to start earlier in the fall.

There were other lessons. In Baltimore, where a contractor for the city delivered paper ballots to one district that were not properly printed, that caused a series of cascading problems that will take days to unwind—from voters casting ballots that will not count, to reconciling votes and declaring official outcomes in city races.

That printing error is a warning sign for states or counties that anticipate printing unprecedented volumes of paper ballots in the fall. However, because Maryland is a state offering same-day voter registration, most issues affecting voters could be solved on Election Day at in-person voting sites.

In Washington, one reaction to not getting ballots into voters’ hands was to email voters the ballot—to be printed at their home and then submitted. That response was quickly criticized by cybersecurity advocates, saying it offered a hacking pathway (even though some states have been sending ballots this way to soldiers stationed overseas).

In Philadelphia, there were also reports that the city was ignoring social distancing standards by cramming their new voting machines (one per jurisdiction) into multi-precinct voting locations, which forced voters and poll workers to stand on top of each other. There also were reports from other counties that election officials did not put ballot drop boxes in visible locations.

Stepping back, however, it appeared that apart from Montana’s 63 percent record turnout, a quarter to a third of the registered voters in states that were expanding at-home voting for the first time ended up casting mail-in ballots on June 2, according to the National Vote at Home Institute’s Keisling.

“If we knew how many mailed-out ballots went out, you could apply an 80 percent rule—if 100,000 go out, 80,000 will come back,” he said, adding that not every state will post this information. “It varies a bit, but that’s the general rule, plus or minus 5 percent… All you need to do is look at the total votes [cast] and what’s the difference [subtracting that mail-in ballot estimate]. Those [remaining voters] are the people who showed up at a polling place.”

This article was produced by Voting Booth, a project of the Independent Media Institute. Steven Rosenfeld is the editor and chief correspondent of Voting Booth.  He has reported for National Public Radio, Marketplace, and Christian Science Monitor Radio, as well as a wide range of progressive publications including Salon, AlterNet, the American Prospect, and many others.