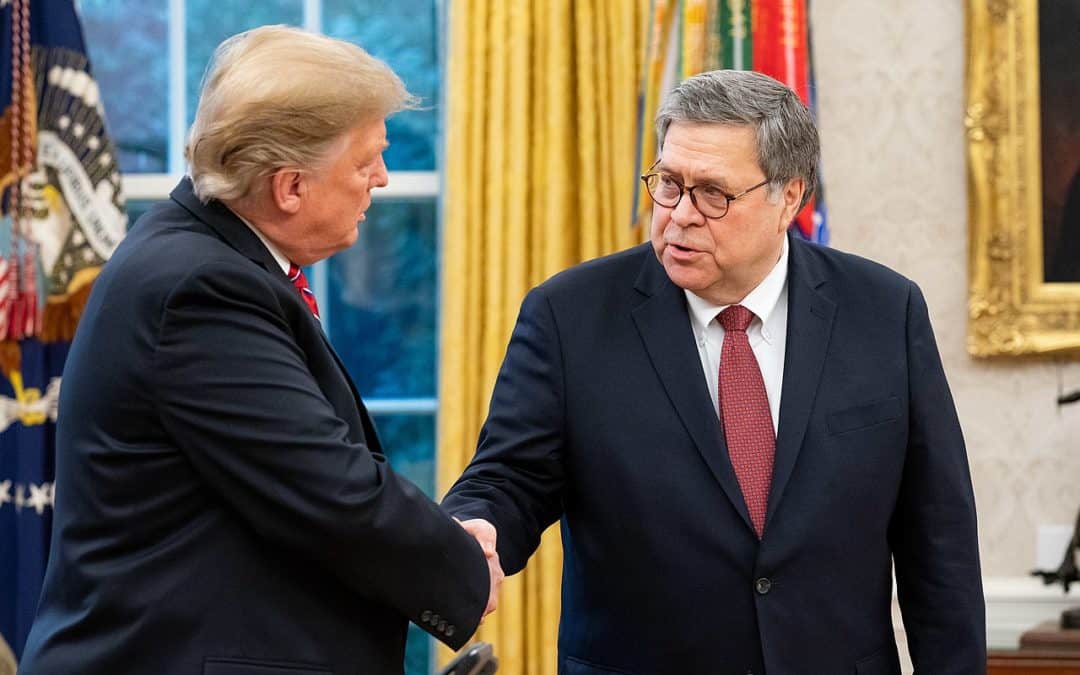 Trump’s first national security adviser, General Michael Flynn, had a phone call with the Russian ambassador to the U.S., Sergey Kislyak, just after President Obama had imposed sanctions on Russia for interfering in the 2016 election on behalf of Trump. Flynn “urged Mr. Kislyak in a phone call not to escalate tensions with a retaliatory move against the United States—perhaps by kicking American diplomats and spies out of Russia.” Flynn denied that the call was about sanctions, but it has become pretty clear based on new reports that what took place was “a back-channel discussion with a top Russian official that might lead to the new Trump administration gutting the sanctions its predecessor put in place to punish the Russians.”

In any other time, a national security adviser who acted this way would be considered a traitor.

But not in Bill Barr’s America.

Back in 2003, Pulitzer Prize-winning author and radio host Studs Terkel told me in an interview on my show that “hope dies last,” a phrase that became the title of his last book. If there’s an inverse to that saying, it’s that outrage dies first.

When America learned that Richard Nixon had committed treason to become president, sabotaging LBJ’s Vietnam peace talks in 1968, the outrage lasted a few days, but was then quickly forgotten.

When America learned that the Reagan campaign had committed treason by cutting a deal with Iran’s Ayatollah Khomeini to deliver spare parts and weapons if they’d only hang onto the hostages until Reagan defeated Jimmy Carter, the outrage lasted a few days, but was then quickly forgotten.

LBJ lied to us about the Gulf of Tonkin; he’s today remembered for the Great Society, the Civil Rights Act and Medicare.

George W. Bush lied to us about Iraq; he’s today lionized by “never Trumper” Republicans on MSNBC as a statesman.

Jeb Bush rigged the Florida election in 2000; tens of thousands of African Americans were thrown off the voter rolls so his brother George could get within a few hundred votes of stealing the election; today Jeb’s seen as an ineffectual but good-natured doofus.

Bill Barr recently pointed out—as have tyrants and dictators before him—that “history is written by the winners.” He knows, because he’s performed in this movie before.

Back in December of 1992, Special Prosecutor Lawrence Walsh was closing in on then-President George H.W. Bush for his complicity in the Iran-Contra crimes; Bush had fewer than three weeks left in office, and Walsh had already secured convictions and indictments against several Reagan/Bush apparatchiks.

Bush turned to his attorney general—Bill Barr—and asked what to do. Barr’s advice was that Bush pardon everybody and thus kill the investigation altogether. Bush did it, and the screaming, all-caps, four-column-wide headline at the top of the December 25, 1992, New York Times front page read: BUSH PARDONS 6 IN IRAN AFFAIR, AVERTING A WEINBERGER TRIAL; PROSECUTOR ASSAILS ‘COVER UP.’

It was a political earthquake at the time; New York Times columnist William Safire had been calling Barr “Coverup-General” instead of attorney general months before that because Barr had helped Bush, earlier in the year, cover up the illegal sale of weapons of mass destruction to Saddam Hussein.

“William Barr, the 42-year-old Attorney General, became acquainted with Mr. Bush in his 20’s, when he served as one of his aides in the C.I.A.,” Safire wrote on December 28, 1992. He added, “A loyal order-follower, Barr makes no major decision without a nod or wink from his mentor [Bush].”

In an op-ed two weeks earlier, Safire noted that “the Coverup-General and his corrupt crew… [had] a style that would make a Watergater blush.”

In the Nazi era, the man holding Bill Barr’s job in Germany’s government was German Justice Minister Franz Gürtner. One of his most famous quotes was, “If you cannot recognize the will of the Führer as a source of law, then you cannot remain a judge.”

Like Trump’s “very fine people” threatening Democratic governors with assault weapons and swastikas, it appears that Coverup-General Barr is also taking a cue from previous fascist regimes: be it George W. Bush or Donald Trump, a Republican president is a law unto himself.

If he colludes with foreign powers, breaks numerous laws, and damages the government of the United States, that’s all fine. He’s the president, and his authority “will not be questioned.”

As a result, we now stand at a historical fork in the road.

In one direction, outrage doesn’t die first: Barr has gone too far in supporting naked treason by a former military official and the politician he served, and will be held accountable by Congress, the Courts and the press.

In the other direction, future Democratic presidents are only willing to “look forward instead of looking backward,” the press develops amnesia like it has about Barr’s 1992 history, and another act of Republican treason for political purposes goes unpunished and eventually fades from memory.

Will the “winner” be Trump and Barr, or American democracy? History’s guide is uncertain.

Thom Hartmann is a talk-show host and the author of The Hidden History of the War on Voting and more than 30 other books in print. His most recent project is a science podcast called The Science Revolution. This article was produced by Economy for All, a project of the Independent Media Institute.