Trump Throws Grandma From The Train 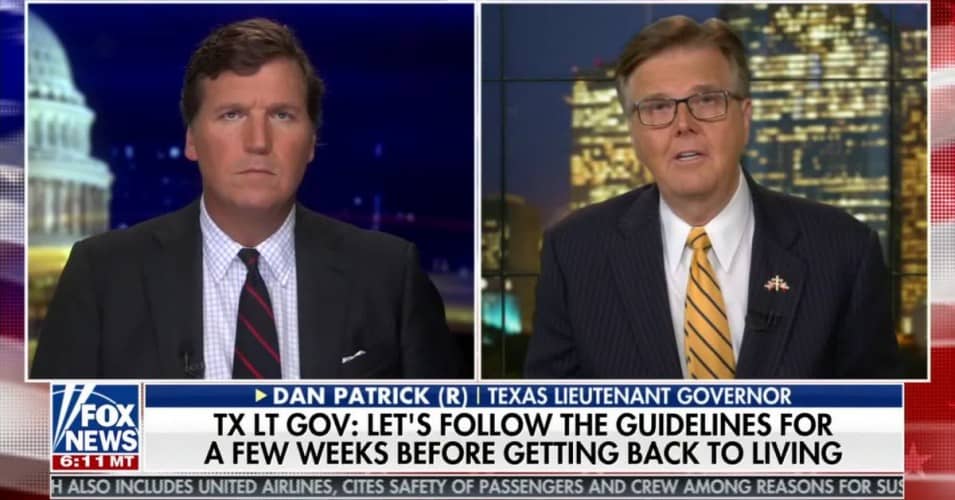 A few days ago, Texas Lieutenant Governor Dan Patrick went on Fox News to deliver the message, “Let’s get back to work. Let’s get back to living. Let’s be smart about it, and those of us that are 70 plus, we’ll take care of ourselves. But don’t sacrifice the country.”

As he explained to host Tucker Carlson, this means that senior citizens should be “willing to take a chance on [their] survival” in order to restart the economy.

If this seems gruesome and even sociopathic, that’s because it is.

But to Patrick’s “credit,” he was one of the few Donald Trump allies who was frank enough to publicly support the logical and inevitable result of Trump’s proposed policies.

To review the situation, after grudgingly agreeing with all medical and public health authorities that we need to close schools and non-essential businesses, Trump reversed himself with the slogan “we cannot let the cure be worse than the problem itself,” and urged that restrictions on economic activity should be lifted within a few days or weeks.

As virtually every expert has pointed out, restarting economic activity so soon will spread the contagion to catastrophic levels. It will probably mean the death of more than one million Americans, and, of course, not just the elderly. It would necessitate the hospitalization of many millions, overrunning our healthcare system, so that both COVID-19 patients and everyone else who requires hospital care cannot possibly receive the quality of care they need. It would be a massacre.

If Trump implements his “back to work” policy, it will be the single worst presidential decision in history. None of us would be untouched; in time, we would all know someone close who died and several people who became critically ill.

On that horrific note, let’s turn to the real point of this column – how can you persuade Americans to open their eyes and understand what’s going on?

Usually, you can’t. Confirmation bias encourages people to seek out information that conforms to what they already believe or want to believe (e.g. watching Fox News), while – inside their minds – ignore or refute information that disproves those assumptions (e.g. calling truth “fake news”). It is a selective use of evidence through which people reinforce to themselves whatever they want to believe. It takes years and years of sharp messaging to overcome confirmation bias – with one exception.

A catastrophic incident (e.g. September 11, Hurricane Katrina, the Vietnam War or the Great Depression on a societal level and perhaps a critical illness, bankruptcy or divorce on a personal level), can alter people’s fundamental beliefs rather quickly.

And, whatever Trump does or doesn’t do, that’s what is coming with coronavirus. In a few weeks or months, Americans will see a tremendous number fall sick and die, while millions will be financially ruined. All of a sudden, public policy is not distant or about some vague group, it’s about them, personally, right now. And Americans will be looking for someone to blame for their misery.

Obviously, the right-wing will try to lock in their messages that government cannot work and that elites, experts and the media cannot be trusted. They will also use absurd narratives that blame Obama/Biden, continue to race-bait and blame people of color and immigrants, and suggest that God is punishing us for gays, abortion, and whatever else they fear.

If our side does not push back hard, we can lose this argument and a significant political realignment could go against us. On the other hand, if we effectively communicate the truth to Americans – that Trump is dangerous to their health and the health of their families and friends – it could expose the political cynicism with which he and his fellow conservatives approach governing and lead to a long-term realignment toward progressive policymaking.

In sum, if you want to persuade, don’t focus on Trump’s lies, immorality or bigotry. Focus on how he is risking the health of the person you’re talking to, and his/her family and friends.

It is Donald Trump who is trying to throw grandma from the train. YOUR grandma.

Gloria Totten is President of the Public Leadership Institute.