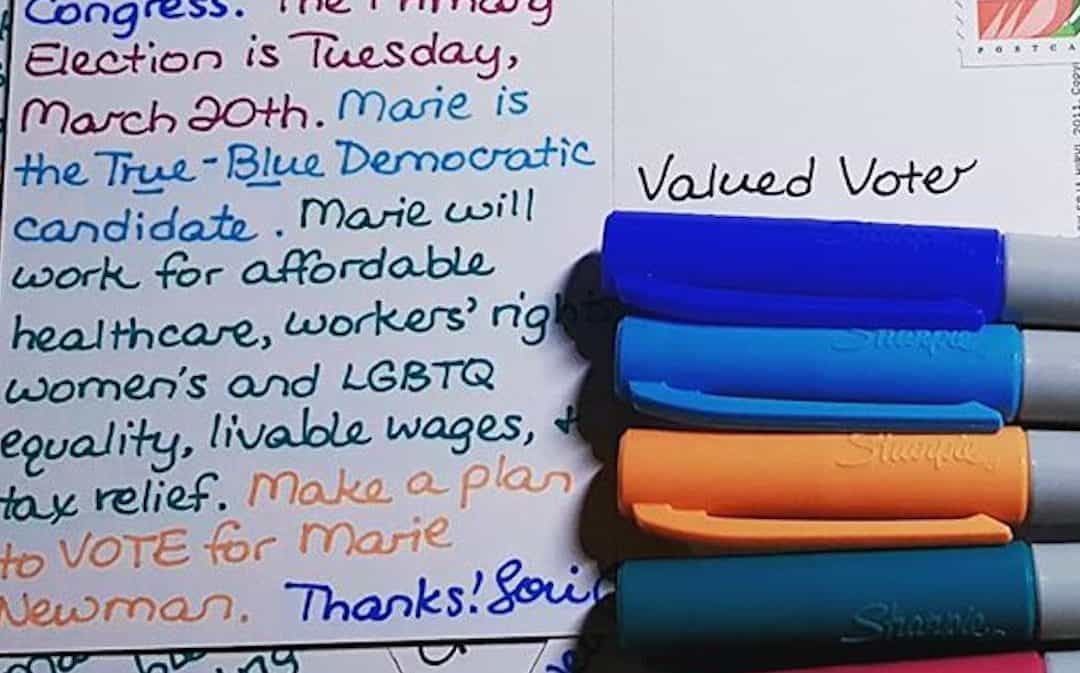 A core lesson from the Illinois primary is that it’s not enough for a candidate to have the right message if there is not sufficient organization on the ground.

Tuesday was a rough night for the Left at the top of the ticket. Bernie Sanders lost to Joe Biden by sizeable margins in Illinois, Arizona, and Florida, adding to a string of losses that has essentially closed off Bernie’s path to win the nomination. This is a loss for the progressive movement, and a painful one for the organization where I serve as Executive Director–The People’s Lobby, a People’s Action affiliate–which endorsed and has been organizing to elect Bernie.

Fortunately, this week’s primary election in Illinois showed that the movement has a path to win governing power—by organizing to elect candidates to a variety of offices who share a broad progressive platform. Despite an election day marked by low turnout amid the COVID-19 pandemic, The People’s Lobby and other progressive groups knocked out the most right-wing Democrat in the House, Dan Lipinski.

We re-elected progressive Cook County State’s Attorney Kim Foxx in the face of vicious attacks by the forces of white supremacy, the Fraternal Order of Police and a private equity billionaire. And we elected to the Illinois Senate Robert Peters, a candidate who came straight from the movement.

Common to all three of these stories is that they combined movement energy from the current political moment with a longer-term history of grassroots power building. Dan Lipinski has represented the 3rd Congressional District since 2005, when he took over the seat from his father, who had held it since 1983. He has long been one of the most right-wing Democrats in Congress—he voted against the Affordable Care Act and has opposed the Dream Act, Medicare for All, the Green New Deal and access to abortion.

Suburban anti-bullying activist Marie Newman challenged Lipinski in 2018 with a campaign that included all of the core elements of the progressive agenda but in practice began to seem to voters like a single-issue campaign focused on reproductive rights. The People’s Lobby had been organizing in the Bridgeport neighborhood since 2011.

We fought together with other groups to close a coal power plant, and we pushed the city to reinstate a bus line serving low-income residents on 31st Street. In the 2018 election, we mobilized dozens of members and dialed and doorknocked thousands of voters. We talked about our vision for universal health care and good jobs, and we asked voters to share their issues and concerns, connecting our shared struggles to why we wanted to ask them to vote for Newman and join our movement. That year, Newman lost by just 2,145 votes, 2.2% of the total votes cast.

Neither Newman nor The People’s Lobby’s grassroots base in the 3rd District stopped organizing after this loss. The People’s Lobby continued fighting in Bridgeport alongside our local members on various issues including bail reform and a fair Cook County budget that moves money out of the Cook County Jail and into public services that address the root causes of crime and violence.

In this cycle, we learned from one of our mistakes in 2018: Instead of focusing only on frequent primary voters, who in the 3rd District skew older, whiter, more conservative and more connected to the Democratic machine than the district's population, we targeted a wider universe of voters with less extensive primary election voting history. This required narrowing our geographic focus to one ward so we could canvass those voters more deeply in person, by phone and through texting.

Newman’s campaign continued to include reproductive rights as a core element but more intentionally embedded that within a broader agenda focused on income inequality and including support for Medicare for All, a Green New Deal, universal child care, and more. On March 17, Newman prevailed, with a lead of 2,700 votes. In the combined urban/suburban district, the City of Chicago wards had long served as Lipinski’s base. While he still won a majority of Chicago voters again this year, he lost to Newman by close to 1,000 votes in Chicago's 11th Ward, where we focused our work.

The organizing that led to the re-election of Kim Foxx as Cook County State’s Attorney has a similarly long history, starting in the years leading up to her first win in 2016. Anita Alvarez had been a target for years of grassroots organizing by Project NIA, SOUL, and others for her “tough on crime” approach to prosecution. When the video of a police officer murdering Black 17-year-old Laquan McDonald was released after an attempted cover-up that was abetted by Alvarez, a confluence of movement organizations made sure she felt the consequences in the 2016 election.

Young, Black women connected to the Black Lives Matter movement coined the hashtag #ByeAnita, which quickly went viral, and The People’s Lobby, Reclaim Chicago and other electoral groups dialed and doorknocked hundreds of thousands of voters, leading to Foxx’s first landslide win in 2016. Foxx then used her office’s discretion in charging and plea bargaining decisions to significantly reduce incarceration of Black and Latinx people and supported bail reform efforts demanded by the Coalition to End Money Bond that resulted in thousands fewer people locked up before trial.

Unsurprisingly, the forces of white supremacy regrouped and began fighting back. The notoriously racist Fraternal Order of Police—whose Chicago lodge endorsed Donald Trump—stoked a firestorm of public backlash to Foxx’s decision to drop charges against the actor Jussie Smollett, who was accused of filing a false police report after he claimed to have suffered a racist, homophobic attack while visiting Chicago.

In August, billionaire Bill Conway III announced his candidacy against Foxx. His campaign was bankrolled by his father, a co-founder of the Carlyle Group private equity firm that profited from the second Iraq war, sold tear gas to the Ferguson police, and manages the Chicago police pension fund.

In fighting off attacks on Foxx by white supremacists and faux progressives, the continuing grassroots organizing by the People’s Lobby, SOUL in Action, the Mass Liberation Project, Vote Liberation, and a variety of other groups was crucial in ensuring that voters saw through the racist dog whistles of Foxx’s opponents. Grassroots leaders and activists had conversations with thousands of voters about the kind of criminal justice system that would create real community safety by addressing the root causes of violence instead of doubling down on a racist incarceration system.

A third victory from this Illinois primary election, Robert Peters win in the Illinois Senate, was connected to the stories leading up to the other two. Robert Peters served as Political Director for The People’s Lobby and Reclaim Chicago, where he fought as an organizer to end money bail and trained left candidates for Chicago City Council and other offices, work that helped lay the groundwork for the Newman and Foxx wins. In January 2019 he was appointed to an Illinois Senate vacancy, where he championed bail reform. This year, he had to run for his Senate seat, so he launched a movement-oriented campaign.

He shared his story of being born to a mother suffering from substance use disorder in the years when the “war on drugs” was escalating, and talked about the fact that schools in the district all have police officers but few have social workers. He and his team had real conversations with thousands of voters about the kinds of public services that would be needed to create safe and healthy neighborhoods. Voters overwhelmingly agreed that 40+ years of “tough on crime” policing and mass incarceration have not made them safe, but have led to millions of Black and Latinx people being locked up. He won a contested primary election this week and will run unopposed in the general election.

The current political landscape is complicated and challenging, with the Bernie campaign subsiding and Biden likely to win the primary just as the world heads into a new crisis triggered by the COVID-19 pandemic. As the progressive movement charts its course, a core lesson from the Illinois primary is that it’s not enough for a candidate to have the right message if there is not sufficient organization on the ground. A successful progressive campaign needs to have the right message and agenda and the right relationship between a candidate with vision and credibility and longer-term progressive infrastructure.

The People’s Lobby (partnering with Vote Liberation for our Kim Foxx voter contact) was able to draw on the organization we had built over the past nine years to make 150,000 dials and doorknocks, send 85,000 texts, engage 11,000 conversations with voters, and distribute social media ads watched by more than 100,000 voters in this election cycle. Drawing on short-term bursts of movement energy can be incredibly powerful, but it’s not enough, and the infrastructure that is needed cannot be built in just one election. Fortunately, we know that when we do that work and bring together those elements, we can win both important elections today and the fight for a better future.

Will Tanzman serves as Executive Director of The People’s Lobby, part of the People's Action national network of grassroots groups. First published by In These Times.