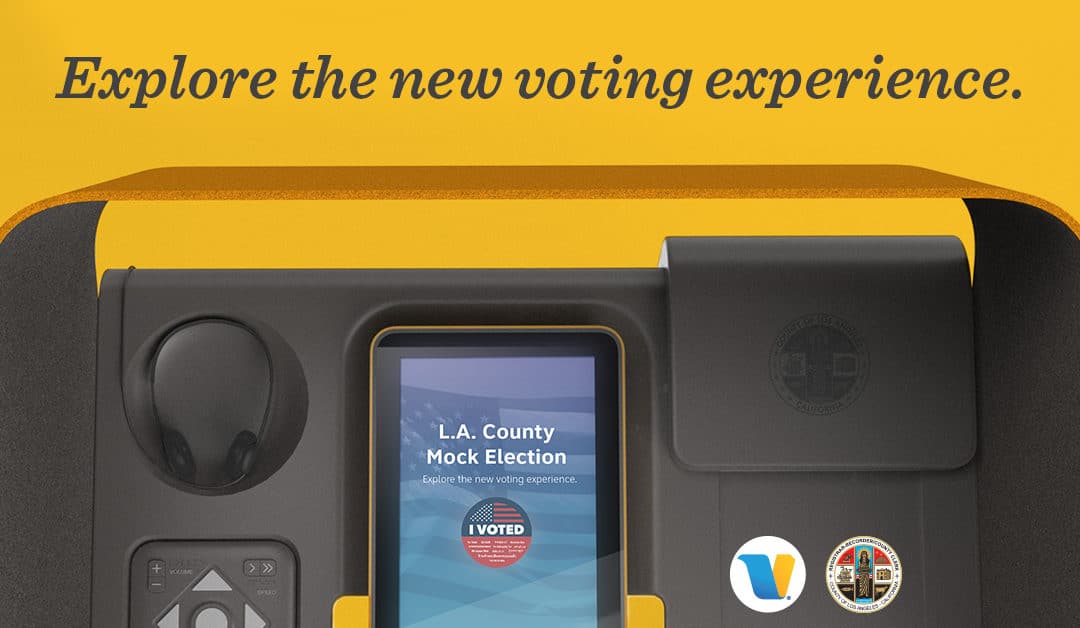 On the biggest day of the 2020 presidential season so far, Super Tuesday, America’s biggest new voting system—in Los Angeles County—widely frustrated voters and poll workers in its debut in a jurisdiction that’s more populous than 39 states.

Though the county had offered 11 days of early voting for the first time and spent millions to promote its new multilingual, user-friendly, part-paper and part-digital system, voters overwhelmed pinch points on Super Tuesday. Thus, as seen in other presidential contests in 2020, hours-long waits to vote repeatedly surfaced.

Voting Booth witnessed many possible reasons behind the delays. Inside the regional voting centers (replacing precincts) where any county resident could vote, technical problems shadowed the steps in the process. At the check-in desks, electronics linking iPads to voter rolls had connectivity problems. That difficulty slowed down the intake process, where poll workers were also juggling paperwork surrounding new same-day voter registration and changing one’s political party.

By noon, county officials were telling national media that 20 percent of the machinery in the next step in the process—the sleek, user-friendly consoles that ran in many languages (using different alphabets) and thousands of local ballot styles—were not operating or were sidelined. At numerous precincts, poll workers were seen making adjustments to accommodate a steady trickle of voters over much of the day.

After 5 p.m., that trickle became a torrent. Voters, many of whom said that they hadn’t thought of voting early and expected to quickly vote, found themselves in long lines that lasted an hour, 90 minutes, or more. Many centers—in low-income, middle-class and well-off neighborhoods—had to stay open until 10 p.m. to accommodate voters. Many people stayed in line, even after media organizations declared winners. But others could be seen leaving in frustration without casting a ballot.

It would not be fair to say that Los Angeles’ debut was a complete failure. For many voters who did not experience delays or technical snafus, the most visible parts of the county’s new system received high marks. Its check-in process, using iPads to look up a voter’s registration information and then printing a single sheet of paper with a QR code (a dot-matrix-filled square), was not complex. Voters took that paper sheet and easily slid it into a ballot-marking console, where their choices came up on a touch screen. It ended up printing out their ballots after repeatedly asking voters to verify its accuracy. Voters said that they were pleased, even if poll workers helped them. Voters with disabilities said it was easy to use. Others liked that their ballots went into a semi-transparent bin.

However, there is an emerging national trend and red flag as the country looks to the fall’s presidential, congressional and statewide elections. As new voting systems have debuted during the past month (in Iowa, Nevada, South Carolina, Los Angeles, and other Super Tuesday states such as North Carolina), the newest systems have tended to have some mix of delaying the process, frustrating voters and slowing reported results.

That emerging pattern suggests that voters seeking a change in officeholders next fall are facing a new layer of impediments atop older structural barriers—whether gerrymanders, strict voter ID laws, and other GOP-led restrictive voting options, rules and deadlines. If those older barriers collectively amounted to a 10 percent starting line advantage for the GOP among the most reliable voters to turn out in swing districts and swing states, the catalog of snafus shadowing the newest voting systems may raise that hurdle.

Whether effective investigations and remedial measures will be undertaken in the weeks ahead—starting with examining the operating logs on every machine that failed—is the key question. Beyond apologies and future assurances from election officials, the next test of whether those snafus could be fixed, or would likely recur in the fall, are local elections to be held this spring and summer—the next time this infrastructure is used.

In other forthcoming 2020 presidential primaries, where new voting systems will be used in some counties in swing states such as Florida and Pennsylvania, it remains to be seen if problems that cropped up elsewhere will recur. While some of these issues have to be solved by technology experts, it’s important to note that election officials need to pay greater attention to the public’s inclinations and behavior.

In Los Angeles County, many voters, for whatever reasons, didn’t choose to vote early. The same voting centers that sat empty for days were overwhelmed on Super Tuesday. Just because a system is designed a certain way, doesn’t mean its users will do so. The voting systems debuting now will be with counties and states for years to come. But given the stakes of 2020’s elections, there’s little time left to fine-tune them.