I Know Firsthand Why Unions Should Endorse Bernie 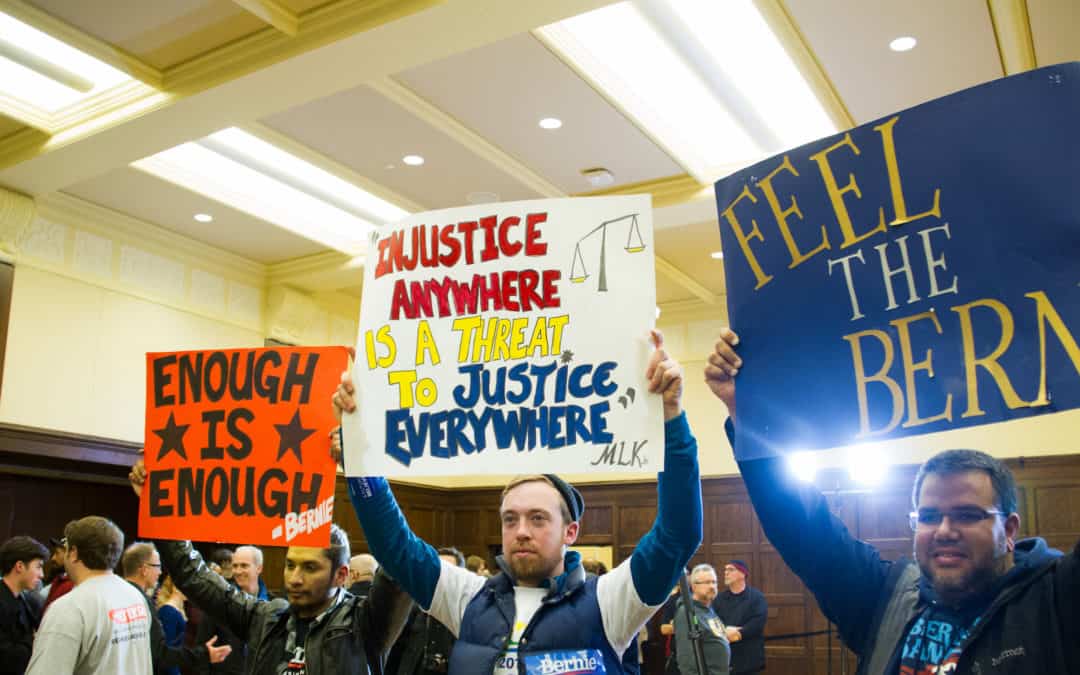 One late summer evening in 2000, my home phone rang in Moretown, Vermont. “Can you please hold for Congressman Sanders?” the voice on the line asked.

At the time, I had been doing what union organizers do when they’re not knocking on doors, going to shift change or running meetings: I was calling workers. In this case, the workers were from a local nursing home, Berlin Health & Rehabilitation, and I was reminding them to show up at the action they’d planned for the next morning. The care providers had organized a “march on the boss,” where a group of workers would go unannounced to meet with their administrator to present her with union authorization cards signed by a vast majority of their colleagues.

Under the National Labor Relations Act, the New Deal-era bill that governs how workers can form a union in this country, this action alone should have been sufficient for the 120 workers to have their union recognized. In the real world of toothless U.S. labor law, however, in which the NLRA has been watered down and reinterpreted so as to dramatically favor bosses, the employer, a Canadian multinational real estate firm, informed the workers via the local administrator that “they couldn’t meet and would need to talk to their attorneys” - in this case, a notorious $600 per hour union-busting law firm. The workers were prepared for this likelihood and were naturally fearful, but were determined to go ahead.

This group of largely working-class women from rural Vermont was rightly worried they’d be fired. While such a move would have technically been illegal, it was nevertheless a distinct possibility, with the employer knowing full well that they would be unlikely to face punishment. And even if they did, it would be a small price to pay for having crushed the workers' organizing drive. Firing workers who dared organize a union was—and is—standard practice in the United States.

The workers had asked then-Rep. Bernie Sanders (I-Vt.) to attend their action the next day. I was new to Vermont but had organized unions all over the country for much of the previous decade, and I scoffed at the idea that any politician would even consider taking the workers' side in this way. Three older leaders named Donna, Dot and Pat had insisted that we call “our Bernie" and invite him. I, like every union organizer of the time, was well accustomed to Clinton-era Democrats all over the country, even in blue Vermont, preferring to "remain neutral” (while gladly accepting donations from the bosses) in these struggles between local working people and massive multinational corporations.

So I was more than a bit shocked when Bernie actually called back. That he was calling to say he was “unfortunately stuck in Washington” for an important vote and would not be able to come back to Vermont for the action astounded me. Of course he was classic Bernie, a bit brusque and prickly, but here was a member of the U.S. Congress actually calling to apologize to the workers that he could not be with them in this critical moment.

Twenty years ago was the height of the Clinton “Third Way" era, when Democrats cozied up to bosses and governed in opposition to the interests of workers, unions and the middle class. This period saw the rise of such policies as NAFTA, Wall Street deregulation, widespread privatization and mass incarceration. So-called “free trade” agreements had encouraged and sped the movement of hundreds of thousands of quality union jobs from the United States to the Global South where wages and labor protections were even lower than ours.

When throngs of workers, environmentalists and activists took to the streets to protest these policies in anti-World Trade Organization demonstrations in Seattle, Quebec City and other locations in the late 1990s and early 2000s, many Democratic leaders scolded us and crossed our picket lines to make common cause with corporate elites. Bernie, on the other hand, stood with us.

While Democrats adopted the age-old Republican “balanced budget” red herring to force though "welfare reform,” slashing public spending on programs that benefited the working class, Bernie was a lone voice calling for increasing taxes on the wealthy, corporations and Wall Street. As Democrats passed financial deregulation that allowed Wall Street to prey upon the working and middle class, resulting most spectacularly in the 2008 mortgage crisis that saw countless Americans lose their homes and their life savings, Bernie demanded that homeowners - not banks - be bailed out. And when the U.S. labor movement issued its protestations against these Democrat-led anti-worker policies, again Bernie was a strong voice defending the interests of working people.

So Donna, Dot and Pat were of course right—what was unimaginable from corporate Democrats was standard operating procedure for “our Bernie,” as they always called him. Over the coming months and years, while these women, with Sanders’ help, went on to successfully form their union and fight tooth and nail for a contract, Bernie, in stark opposition to every other high-ranking elected official, was there. Sanders didn’t just pledge support to the workers, he was consistently attending or calling in to organizing meetings and contract negotiations to encourage workers to vote for the union and stay strong at the bargaining table, walking picket lines, hosting community forums and fundraisers for fired workers, and calling and visiting employers to demand they settle and reinstate workers fired for union activity.

Throughout his career, Bernie has urged workers to “vote for the union” and thanked them for going on strike or fighting for pensions, affordable healthcare, and safe staffing—time after time making it clear that when organized workers fight for their fundamental rights, they’re actually fighting for all workers.

That Bernie is now campaigning on the most pro-worker and pro-union platform in the 2020 field should be no surprise. His plan would double union membership in America and give working people more rights—and democracy—in the workplace. Barack Obama, like many Democrats before him, talked a good game on passing “card check” legislation when addressing union audiences in 2008, only to squander his mandate and two years of congressional majorities without so much as a peep on labor law reform. Bernie's decades-long record makes clear that he will fight fiercely and tirelessly to build the labor movement

It's time for national union leaders to break out of their cocoon and work for Bernie as hard as he’s worked for us. Mobilize membership to elect the most pro-worker and pro-union presidential candidate we’ve seen in our lifetimes.

Andrew Tripp has been a union organizer, leader and member for the last 25 years. He has worked on union, community and political organizing drives in 26 states and 4 countries. He is a member of Rights and Democracy Vermont, part of the People's Action national network of grassroots groups, and lives in Montpelier. First published by In These Times.