Why We Must Remember Berta Cáceres 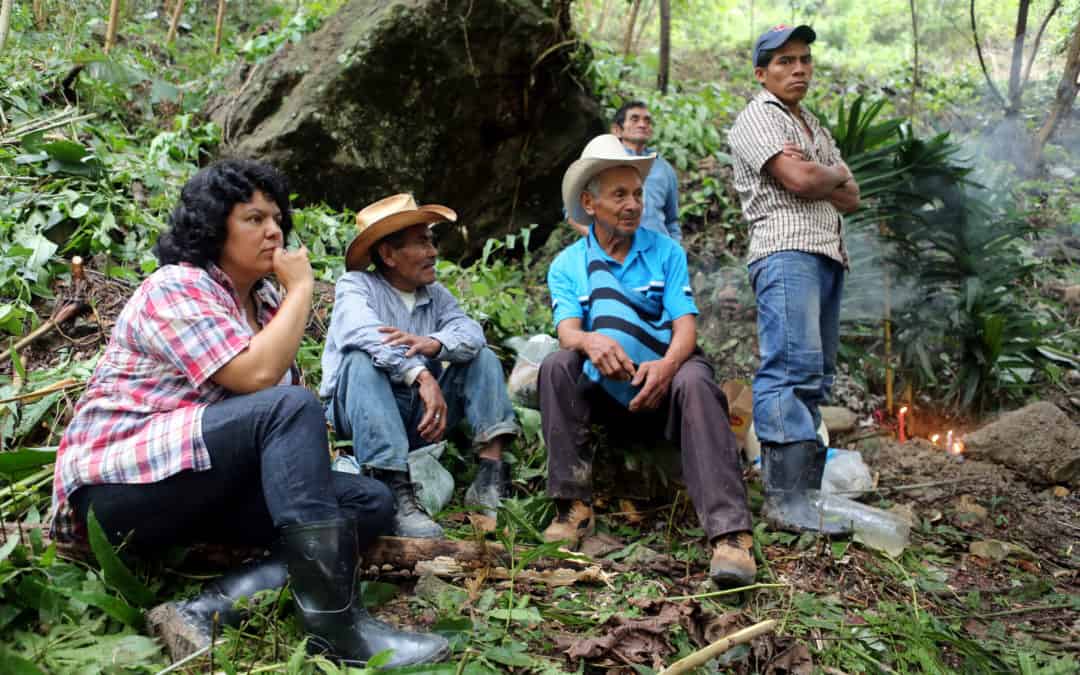 On July 15, 2013, the Civic Council of Popular and Indigenous Organizations of Honduras (COPINH), led by Berta Cáceres Flores, went to protest the construction of a hydroelectric dam on the Gualcarque River. This river, in western Honduras, is considered to be sacred by the indigenous Lenca community. No one from the company that wanted to build the dam had talked to the Lenca. The company—Desarrollos Energéticos Sociedad Anónima (DESA)—was owned and controlled by one of the most powerful families in Honduras, the Atala Zablahs. The Honduran Army, at the behest of DESA, guarded the site. The soldiers opened fire at the protesters and killed Tomás García.

Three years later, on March 2, 2016, gunmen broke into the home of Berta Cáceres and assassinated her. These men, and some of their immediate handlers, have been sentenced to prison terms that will run from 30 years to 50 years. Evidence presented in the court—including phone logs and WhatsApp conversations—shows quite conclusively that these assassins, many veterans of the Honduran army, acted on the orders of the executives of DESA. None of the owners of DESA, many of whom were on these WhatsApp chats, have been charged with the crime.

Now, four years after the assassination of Berta Cáceres, I spoke to her daughter Bertha Zúniga Cáceres, the general coordinator of COPINH. It is important to mention that when Zúniga Cáceres returned from her studies in Mexico City to take up the mantle of COPINH, she herself faced an attempt on her life on June 30, 2017. The assassination of Berta Cáceres came alongside the March 15, 2016, murder of Nelson Noé García of COPINH, and the October 18, 2016, murders of José Ángel Flores and Silmer Dionisio George of the Movimiento Unificado Campesino del Aguán (Unified Campesino Movement of the Aguán, or MUCA). It is now well-known that Honduras has amongst the highest murder rates in the world; but that is not why these people are killed—they are killed for what they stand for, and whom they stand against.

Zúniga Cáceres tells me that the past four years have been “very challenging for us” because she and her colleagues at COPINH have had to struggle to make sure that the “process is not silenced.” It is true that the Honduran investigators, under immense international pressure, arrested the main shooters and some of their immediate handlers. These handlers include Douglas Bustillo, a former head of security at DESA who ran the operation; Sergio Rodríguez, an executive at DESA; and Roberto David Castillo Mejía, the president of DESA. None of the “intellectual authors” of the crime have, however, been arrested; these “intellectual authors” would include the owners of DESA and members of the government.

David Castillo is the senior-most DESA official who was arrested. The records show that he had participated in the conspiracy. However, the case against him has stalled. The delay means that by March 2, 2020, Honduran law would allow the authorities to release David Castillo. “We think that the prosecutors are going to request a one-time extension that can be requested for six more months,” said Zúniga Cáceres. But there is no guarantee that this will do anything. “We are in a lot of uncertainty,” Zúniga Cáceres told me, since “the justice system in Honduras has never cared about this anyways.” The “this” in her statement relates to the role of DESA and its executives. The authorities have been shielding the Atala Zablah family and the ruling party, which had itself tried to collude in the cover-up.

In 2009, the U.S. government actively participated in and egged on the oligarchy to undertake a coup d’état against the left-leaning government of Manuel Zelaya. Since then, Honduras has been governed by the far-right National Party, whose current leader and Honduran president is Juan Orlando Hernández. This is the favored party of the oligarchy. It is important to point out that the U.S. government’s own drug trafficking investigation implicated President Hernández in the deep web of narco-politics in the region. After Hernández won reelection in 2017 through what was widely considered a fraudulent election, people went out onto the streets and were met with tear gas and with live fire; the official death count was 23, with unnumbered people injured.

After Berta Cáceres was assassinated, President Hernández’s minister of security Julián Pacheco Tinoco wrote to Pedro Atala Zablah, one of the leaders of the Atala Zablah family and a board member of DESA. He wanted to assure Atala Zablah and his family that the government would not pursue the case with any seriousness; the case, he said, would be seen as a “crime of passion.” This level of collusion is confounding. Zúniga Cáceres tells me that “neither did the army act alone nor did the company act alone either.” There is, she says, “coordination between the economic and military power centers, which is the essence of the dictatorship under which we live in Honduras.”

Indeed, the investigation—and the court records—show a very high level of collusion. DESA officials would meet in the presidential house as they plotted how to undermine COPINH. This should raise eyebrows about the complicity at the highest level for the murder of Berta Cáceres. But this has been set aside. So have the many WhatsApp messages that show the Atala Zablah family members urging on—in very coded language—the team to do something about Berta Cáceres.

There is ample evidence of the DESA officials bragging about how they have the government—and in particular the armed forces and police—in their pocket. In 2013, DESA’s chief financial officer Daniel Atala Midence says at one point that “I have spent a lot of money and political influence to get those three arrest warrants,” and within a very short time Berta Cáceres, Tomás Gómez Membreño, and Aureliano Molina were arrested. It showed that Atala Midence had considerable influence. At another point in the WhatsApp conversations, Pedro Atala Zablah says that the DESA officials who had already used the Honduran Army and police to guard their site and attack COPINH activists should pay the police “with something more than food” to get them to do its bidding.

In August 2019, the UN’s Working Group on Business and Human Rights went to Honduras. This is a group that tries to get countries to adopt the UN Guiding Principles on Business and Human Rights. These are rather anemic, but at the very least they suggest that companies must not behave in a criminal way nor should business deals be made in secret. In their public report, the Working Group made two important points. First, they said that even though the Ministry of Environment (MiAmbiente) says that they hold open consultations when environmental licenses are being considered, most of these meetings are held only after the licenses have been granted. This is precisely what happened in the case of the Agua Zarca dam case.

Second, the law (Legislative Decree 418-2013) and two ministerial decrees (725-2008 and 1402-2018) allow the ministry to classify elements of the Environmental Impact Study and whatever they deem as “Secret Information.” What this means is that those concerned about a case have no access to free and fair information to deliberate its merits; the government can easily shuffle the paperwork through in a thoroughly undemocratic manner.

Zúniga Cáceres says these laws threaten Honduras. A new “wave of extractive and energy-generating projects” has been on the table for the past decade, since the coup d’état of 2009. The government has been eager to weaken the regulatory framework to allow companies of all kinds to have access to Honduras’ wealth.

In memory of her mother, and of the almost 30-year struggles of COPINH, Zúniga Cáceres says that there needs to be a “refoundation of Honduras.” Honduras has many challenges, she says—corruption, militarization, the attack on the land of the indigenous communities, the femicides, and the political murders. All the more reason to fight hard not only to defend the rights of the people, but to reclaim the country in their name. To do this, says Zúniga Cáceres, is to honor the memory of her mother Berta Cáceres, who was assassinated four years ago.

Vijay Prashad is an Indian historian, editor and journalist. He is the chief editor of LeftWord Books and the director of Tricontinental: Institute for Social Research. He has written more than twenty books, including The Darker Nations: A People’s History of the Third World (The New Press, 2007), The Poorer Nations: A Possible History of the Global South (Verso, 2013), The Death of the Nation and the Future of the Arab Revolution (University of California Press, 2016) and Red Star Over the Third World (LeftWord, 2017). This article was produced by Globetrotter, a project of the Independent Media Institute.