Wisconsin's Voter Purge Is Coming To Your State 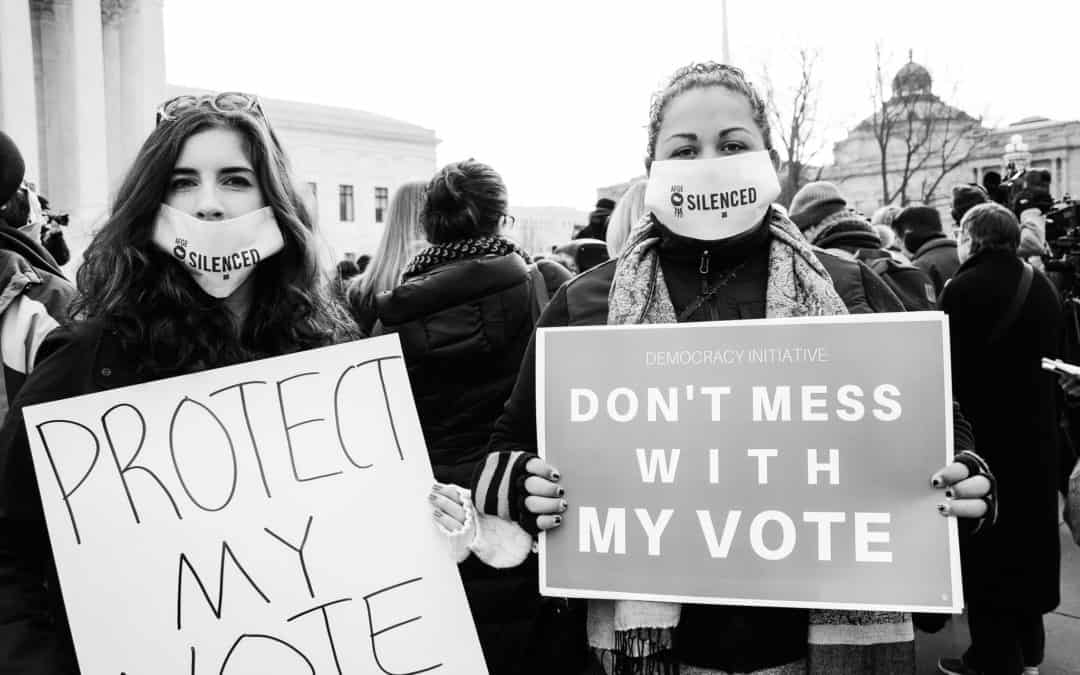 Wisconsin has become early 2020’s Exhibit A for political fights surrounding the updating of statewide voter lists, where escalating court battles over conflicting law, procedures and underlying data could lead to removing thousands of legal but infrequent voters.

The fray’s epicenter is a series of rulings by a county judge against Wisconsin’s bipartisan but deadlocked state election board, which has refused to immediately delete 209,000 voter registrations in a swing state with 3.3 million voters. The conflict may preview legal battles coming to other states. California, Pennsylvania, North Carolina, Colorado and Virginia have all received letters from Judicial Watch, a right-wing group, threatening to file suits like the complaint from the Wisconsin Institute for Law and Liberty (WILL) against the Wisconsin Elections Commission (WEC).

WILL’s lawsuit, where two of its three plaintiffs are donors to state Republican campaigns, seeks the immediate removal of 209,000 infrequent voters who were flagged for the WEC by an interstate data consortium run by top election officials. In March 2019, the WEC’s staff recommended taking 12 to 24 months to vet those voters because in 2018 after using the consortium’s analytics, 24,270 inactive but registered voters—or 7 percent of those flagged and delisted—showed up to vote, as a memo from the WEC explained. (Those voters could re-register under a same-day registration law after showing the correct documentation.)

The affected voters, whose numbers were slightly larger than Donald Trump’s 22,748-vote margin over Hillary Clinton in Wisconsin in 2016, were mostly traced to quirks in the state’s driver’s license database where addresses were extracted and used to verify a voter’s status. The bipartisan WEC initially decided to postpone removing the 209,000 voters, but has since split on party lines. (An appeals court has stayed the lower court’s purge order, and the state chapter of the League of Women Voters has filed a federal lawsuit to stop it.)

But Wisconsin is not the only state wrestling with voter analytics. In Georgia, the process used last fall to remove 300,000-plus old registrations (out of 7.4 million statewide) led to 22,000 voters being reinstated in December. The reversal came after Secretary of State Brad Raffensperger moved up the date up for Georgia’s data query by six months, restoring the inactive voters’ status. In Iowa, election officials pressed pause after finding a 100,000-person database that may have incorrectly listed former felons, who cannot vote until they reapply and regain that right.

Thus, in early 2020, there is an emerging trend of the potential disqualification of thousands of infrequent voters in swing states. While partisan claims surrounding these developments often dominate their news coverage, this trend is driven by a confluence of conflicting laws, regulatory precedents and imperfect voter data.

“The voter registration process and the list maintenance process have become incredibly polarizing,” said Matthew Weil, the Elections Project director at Washington’s Bipartisan Policy Center. “Any removal from the [statewide voter] list is now considered by some to be a purge. And any perceived deadweight is considered ripe for fraud. Neither one of those views is right. There should be reasons to remove people. And there are reasons why we don’t want to remove people too quickly also.”

“Part of the problem here is we are using antiquated, outmoded systems,” said Barbara Arnwine, who from 1989 to 2015 ran the nation’s largest Election Day legal hotline and has since founded the Transformative Justice Coalition. “And it [mass removals] is not required under the NVRA [the National Voter Registration Act of 1993]. But even for those states that chose to do it, they are purposely engaging in a process that is fundamentally outdated and ineffective—and has the predictable consequence of removing valid voters from registration lists.”

Weil and Arnwine both said that the NVRA, which was crafted for an era when people used paper registration forms and postcard mail to contact voters, needed updating. But such modernization was not part of House-passed H.R. 1, an election reform package now stuck in the Senate. Thus, today’s partisan litigants who see advantages in using old and sometimes conflicting state and federal laws, their accompanying bureaucratic procedures and imperfect government data, will likely continue to unfold in 2020 to help their political allies.

Self-appointed voting list vigilantes are not new. But Wisconsin, which had 2016’s second-closest presidential election margin and has seen some of the past decade’s most bitter fights over voting rules, has not seen a voting list fight for many years. Nor does the state have a history of voter fraud. Instead, its election administration has been seen as a model led by a bipartisan panel that valued civic participation.

Part of that legacy led the state to join an interstate consortium—the Electronic Registration Information Center (ERIC)—that draws on several state and federal government databases to help officials update their statewide voter rolls, and to identify and then contact eligible but unregistered voters. (Disclosure: Voting Booth’s reporter was part of the Pew Center on the States team that designed ERIC.) More than half the states now use ERIC.

Soon after Wisconsin joined ERIC, its state election board found a unique but deepening problem. Unlike all but one other state in the consortium, Wisconsin’s Division of Motor Vehicles never offered a voter registration option to residents getting a driver’s license. That is because when the NVRA—or so-called Motor Voter law—was passed in 1993 (and primarily required the drivers’ agencies to offer registration), it exempted states with Election Day registration. Wisconsin was a same-day state. Its reward for good behavior had come back to haunt it.

The NVRA also had other provisions and timelines for updating voter rolls, which become bloated after people move or die. The bottom line in 2020 is that people who have not voted since the 2012 presidential election could be removed if they have had no subsequent contact with election officials. The law envisions that contact as responding to postcard mailings—which many people ignore—or showing up and voting.

In 2017, when Wisconsin’s election board sent various public databases to ERIC for data mining, or using redundant records to update the voter files, it ran into an unexpected problem. Because the state DMV did not manage addresses for voter registration purposes, its files did not have some voters’ actual home addresses. (Voter registration must have actual addresses for voters to get a correct ballot.)

“In these situations, the voters may have provided an address in their transaction with the DMV that was different from their voting address, even though DMV asked for their residential address on their forms,” the March 2019 WEC memo said. “These voters were likely unaware that the information provided to the DMV would affect their voter registration status.”

The reason for the incongruity has nothing to do with elections. It was because people who had registered cars for others—such as a family member who lives elsewhere—used their addresses to avoid paying a county car tax. That tax-evading move was what was behind most of the voters who were removed in 2017 but showed up to vote in 2018, said Kevin Kennedy, the former director of Wisconsin’s Government Accountability Board (which preceded the WEC) and who worked in Wisconsin elections for nearly four decades. The ERIC algorithms used to verify the voter rolls could not tie the same address to that individual. Being exempt from the NVRA’s requirement to register voters at its DMVs hid this address snafu.

Instead, Wisconsin had an older state law on its books for voter list maintenance. That law required removing voters “upon receipt of reliable information” within a month. That deadline and ERIC’s list of 209,000 infrequent voters (most of whom had moved or died) was cited in the Wisconsin Institute for Law and Liberty suit. In suburban Ozaukee County north of Milwaukee, a GOP stronghold, Circuit Court Judge Paul Malloy cited that state law as he repeatedly ordered the mass purge to proceed. Malloy has since held the WEC in contempt for not acting, including issuing penalties and additional fines for its three Democratic members. (An appeals court stayed his rulings.)

WILL’s argument is typical of right-wing lawsuits targeting voter registration lists. It alleges that various vague harms that “impair” or “threaten… the legal rights and privileges” of its plaintiffs. On the other side of this partisan lens are voting rights activists who say that no list maintenance process can ever be error-free, and cite errors made by ERIC in Wisconsin and Maryland. (ERIC’s defenders say these problems come with managing any large and fluid list, and note that ERIC has helped to identify and to register more than 5 million new voters nationally.)

But all of these arguments and details—which come from a conflicting mix of laws, bureaucracy and porous data—obscure some bigger points, said Justin Levitt, a professor of constitutional law at Loyola Law School and former staff attorney with the U.S. Department of Justice’s Voting Section.

“There are only a few states where nonvoting is still used to trigger the NVRA removal procedure, and they tend to be [citing] legacy laws from decades ago when ham-handed approaches to list maintenance were more common,” he said. “The vast majority of states only start the NVRA process when there’s some affirmative evidence of ineligibility, which is a little more like using a scalpel rather than a chainsaw to do surgery.”

In other words, activist right-wing law groups are targeting an imperfect landscape surrounding the way voter rolls are updated. And the most likely impact—should they prevail in court—could be disrupting or discrediting the 2020 voting process in swing states. But it is hard to estimate the magnitude of their impact apart from noting thousands of voters could be affected in states with close elections.

“We don’t have great data on how many of the registrations at issue in these battles correspond to voters who are still eligible,” said Levitt, who added that the remedy for voters was checking their registration status two months before Election Day. “Purges unquestionably affect voters. But this is an area where voters have more control than other aspects of election administration.”

Kevin Kennedy noted that any incorrectly purged Wisconsin voter could re-register on Election Day, when people have to present proof of residency and a photo ID. While unsuspecting voters might not have all those documents with them, he said that the state does accept emailed bills as proof of one’s addresses.

“If anything, it’s actually gotten better because you can do it electronically,” said Kennedy. “You can show your electronic bills. [But] they are not always the best for students, because sometimes their bills are at their parents’ house.”

Stepping back, the former state election director said the fray over voter rolls was a sign of how hard-fought 2020’s election cycle would likely be in his state.

“In Wisconsin in 2020, the big thing besides the voter purge issue will be a voter turnout issue,” Kennedy said. “The Democrats are saying they need to mobilize voters. They can look back to last April and see they were clearly out-mobilized in the state Supreme Court race. It was supposed to be a non-partisan race, but clearly had partisan motivations going on there. You’re not going to see Republicans sit back. They will redouble their efforts.”