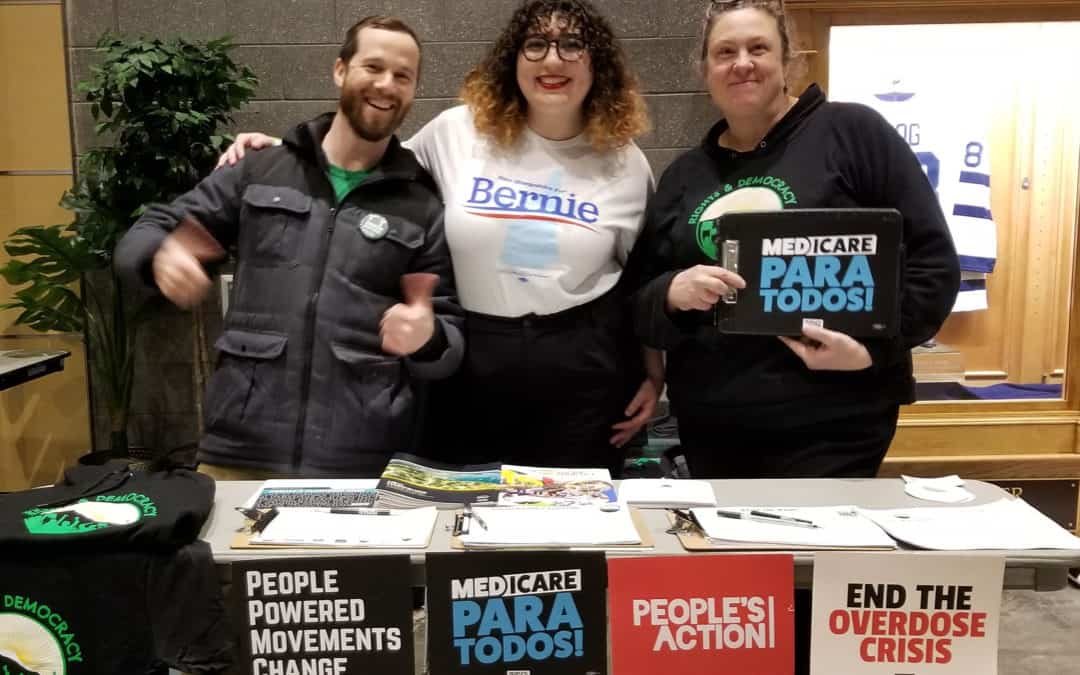 This is it, folks!

Tuesday’s presidential primary is our big day - when the people power our member-driven organization, Rights & Democracy (RAD), has built over the last four years will shine. We will show the nation what people power truly looks like, as we help Senator Bernie Sanders win big in the Granite State.

Hundreds of RAD members from New Hampshire and Vermont have been joined by volunteers from across the nation to help Bernie over the finish line in the last days and hours of this critical campaign. So much is at stake. Weekend after weekend, day after day, we have shown up at rallies, events, and most importantly, to knock on doors and talk with folks about why Bernie’s multigenerational, multiracial campaign is just the beginning of a change we can believe in.

Bernie’s not only going to win the Democratic primary in New Hampshire: the movement he has started will be the force that will defeat Trump in 2020, and put the people back in charge of our government. 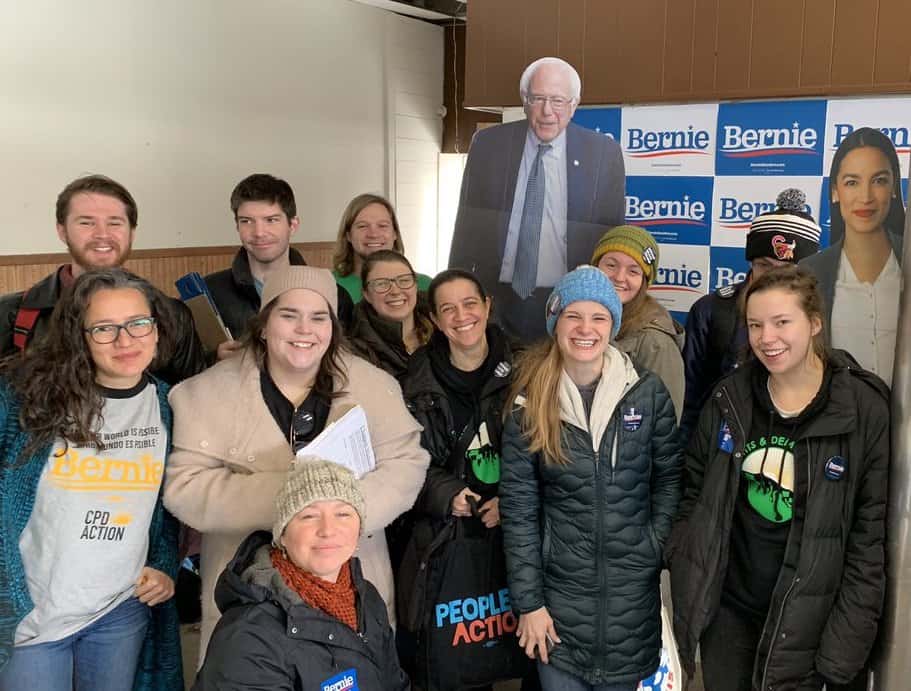 Just this past weekend, volunteers from RAD and other grassroots groups knocked on more than 150,000 doors in just one day - which is more than a door a second! Now that’s the power of people coming together, truly united.

As I have criss-crossed New Hampshire in these final days of the campaign with our leaders, I have seen this people power in action. On Friday in Manchester, where the DNC debate was hosted at St. Anselm’s College, we rallied throughout the day to remind the candidates that we are in a climate emergency they must address. We then cheered Bernie on inside the debate hall.

On Saturday, we canvassed neighborhoods all across the state, then went on to rock the crowd at the New Hampshire Democratic Party’s annual McIntyre-Shaheen dinner, ensuring Bernie got the biggest cheers of the night. Then we were up again bright and early on Sunday morning to continue the hard work of making calls, knocking doors, and talking to people one-on-one, including those who might not yet be supporting Bernie.

We have been joined in this effort by our fellow People’s Action members in the New Hampshire Youth Movement and other groups like VOCAL-NY, Make The Road New Jersey, Neighbor To Neighbor from Massachusetts and the Maine People’s Alliance, and volunteers from our national grassroots partners in the People Power for Bernie coalition, including the Center for Popular Democracy Action, National Nurses United and the Sunrise Movement.

I trained over 80 volunteer @BernieSanders canvassers yesterday from all over the east coast. Their stories, dedication & #PeoplePower is why we're going to win tomorrow! #nhpolitics #fitn @RightsNH @PplsAction @CPDAction @People4Bernie pic.twitter.com/4RRman4ILK

Together, we’re changing the way politics are done in this country.This is people power: This is what democracy looks like.

This kind of groundswell from the grassroots hasn’t been seen in our country for a long time, and it makes some nervous - especially other candidates who don’t have the strength of ideas or personality to unite voters across race, place and generations in the way Bernie does. Some have even tried to discount our efforts by trying to equate them with the “dark money” campaigns of the corporate right.

But if you come to New Hampshire and open your eyes, you’ll realize this is far from true. What’s happening on the ground here and all across the country is changing politics as usual. To see thousands of volunteers turn out to support Bernie, who has been unbought and unbossed for forty years, is inspiring. It inspires me to believe this country can belong to its people.

Billionaires may have an unlimited ability to spend money to promote their interests. But we have people power, which is our unlimited belief that when we stand together, we can say enough is enough - to endless wars, inaction on climate change, and a racist and rigged economy that harms too many communities.

In New Hampshire, our Keep it in the Ground campaign has been especially effective in bringing people together around the notion of moving quickly to phase out fossil fuels and create a just transition to a clean energy future for us all, while also holding fossil fuel companies responsible for the damage they’re doing to our communities and planet. 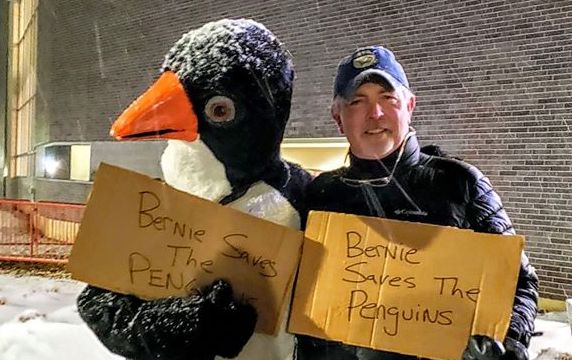 This campaign has reached thousands of people - online and offline - with this important message, and it’s helped to hold all candidates accountable to telling us exactly what they’ll do in response to our climate crisis.

We know Trump wants to win New Hampshire. Badly. He lost here in 2016, and this is where Sanders scored his biggest victory that year. So, we’re aiming to send a clear message by giving Bernie a big win in our first-in-the-nation primary, to let Trump know his days as president are done.

Too many communities have been harmed, or at risk, under Trump: our transgender and nonbinary folx, immigrants, and all of those middle- and working-class families who are the backbone of our country’s economy, yet bear the weight of a ballooning deficit fueled by tax credits to billionaires.

In New Hampshire, a state hit hard by the opioid and overdose crisis, we are seeing a need to embrace a truly universal health care system in this country that provides harm reduction care, mental health care, and all of the care and treatment needed for people to live and recover. In this election, only Bernie offers the kind of bold, visionary solutions we need.

Sanders is building a broad, multiracial working-class movement to advance a transformative people’s agenda in this country. Because of this, he uniquely positioned to defeat Trump in 2020. And, as we’re seeing across the nation, he is galvanizing young people in record numbers to support his past campaigns and current run for president.

We know all of Trump’s actions are designed to instill fear and despair, but we won’t let that deter us from building a multicultural, multiracial, and working class movement based on love and hope for a better future.

Love and our hope for a better future - that’s what Bernie’s campaign represents, and it is why we are building a movement that will ensure our next president can take on corporate power and deliver justice -economic, environmental, racial, social, disability, LGBTQ, and gender justice - for all people, everywhere in our country

In New Hampshire, we’ve had a taste of people power, and it is good. We know what democracy looks like - it looks like all of us. That’s what excites our members, and grassroots organizations around the country: Bernie’s candidacy is more than a campaign, it is a call for building a broad-based, grassroots movement at just the time it’s most needed in our country’s history.

Lisa Demaine is Keep It In the Ground Field Coordinator for Rights & Democracy New Hampshire. She has led teams of millennials pressuring politicians to make deeper commitment to addressing the climate crisis, mobilizing thousands of young people across the Granite State. You can reach her at lisa@radnh.org