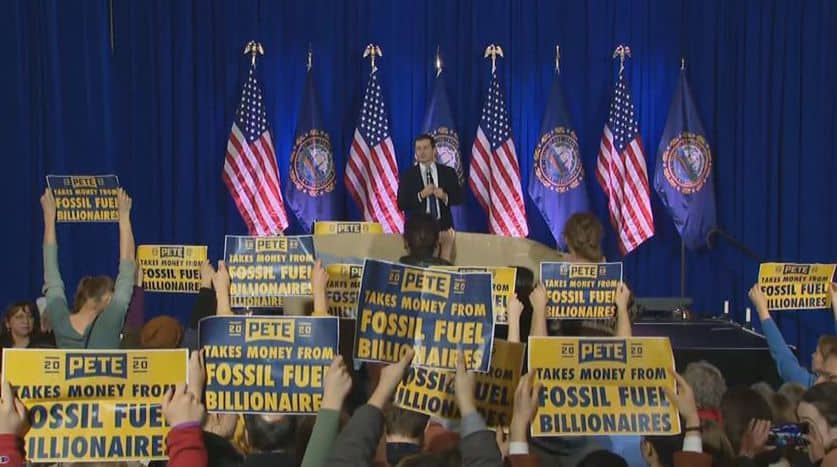 The world is literally on fire because of climate change, and the next President of the United States must take swift action to end our dependence on fossil fuels. That’s why, in New Hampshire, we challenge every candidate who wants our votes to sign our pledge to Keep it in the Ground. 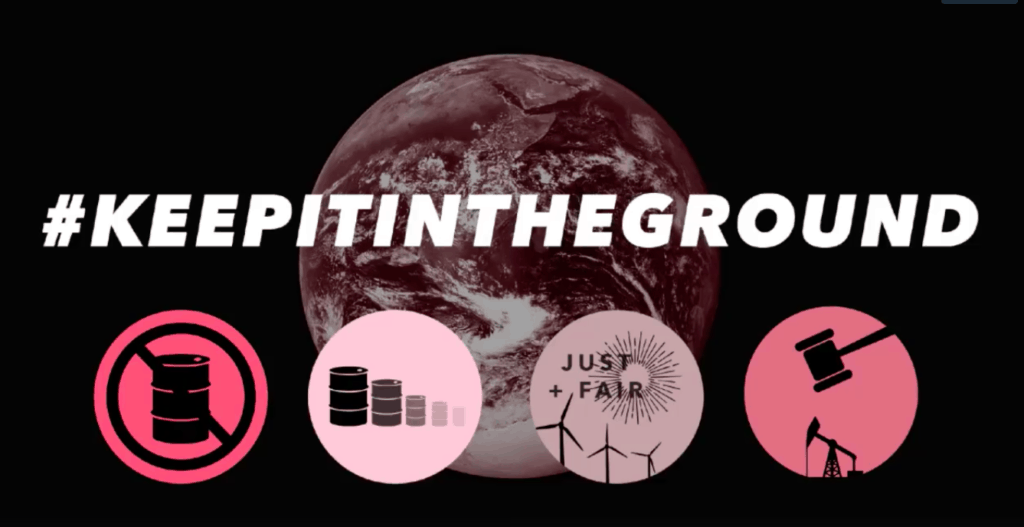 We’re showing up at every turn as candidates crisscross the Granite State ahead of Tuesday’s primary vote to remind them that we’re in a climate emergency. And we’re challenging them, through our #OurFutureOurDebate campaign, to address climate change head-on in their debate at St. Anselm’s College this Friday, which will be hosted by ABC News and Apple News.

Check out this video in which I urge Vice President Joe Biden to make it more clear how he’ll phase out fossil fuels and shut down the last remaining coal plant in New England, which is in Bow, NH.

Or this video, where we challenge Pete Buttigieg to lay out a clear plan for how he’ll hold fossil fuel companies accountable for the damage they’re doing to our communities and planet.

Over the past few months, we’ve birddogged candidates about their climate plans - or lack thereof. We’ve also asked about the support their campaigns get from fossil fuel industries, and their plans, if elected, to hold these industries to account - or not.

We’ve been out door-knocking across the state to engage voters - especially young voters - on why this election and raising their voice on climate change is critical.

And now, we’ve put the candidates’ climate plans to the test, and given each of seven candidates who’ll be on the stage tonight at the DNC Debate in New Hampshire - Sens. Amy Klobuchar, Elizabeth Warren, and Bernie Sanders, Vice President Joe Biden, Pete Buttigieg, Tom Steyer, and Andrew Yang - a climate grade.

We have asked, and will continue to ask, every presidential candidate to commit to take four “no excuse” actions within their first ten days in office, to set the nation on a course to confront our climate crisis. Because matter who wins the primary, we need the next president to move quickly.

Our next president must:

That’s why we and the other members of our Keep in the Ground coalition, with fellow People’s Action affiliate the New Hampshire Youth Movement and 350 New Hampshire, are doing all we can to demand that all of our elected officials - from the President to governors and state legislatures commit to action on climate change.

At town halls and ropelines, Keep It In the Ground members publicly urge presidential candidates to take the climate emergency seriously, and not just offer empty promises. If they want our votes, they need to live up to the unprecedented challenge of climate change.

The solutions are within reach, and our only option is extinction. Yet science tells us if we want to survive, we must act now to end fossil fuel production, consumption, and exportation - there’s no time to waste. And we must also hold fossil fuel polluters to account for the mess they’ve gotten us into.

It’s not too late to create a clean and sustainable energy future for ourselves and for future generations, in which everyone shares in the benefits and rewards. But the fossil fuel industry has demonstrated time and again that they have no interest in ending oil and gas production until they've extracted every last bit of carbon from our earth, no matter the cost to future generations. And they're prepared to buy our elections in order to continue business as usual.

We don’t expect the transition to clean and sustainable energy to take place overnight, or even in a year. What we do expect is a President who will send a clear message to the fossil fuel industry that the time when people’s bodies and health can be sacrificed while polluters take profits to the bank is over. The time for slow and moderate action is long gone.

We know who is responsible. We have solutions. And we have a plan to transform our economy away from one predicated upon pollution, exploitation, and greed into one that is just, life-giving, and people-centered.

To get there, we need a political leader with a clear vision for this just transition. By keeping fossil fuels in the ground, we open up the possibility for a world in which future generations will know a cleaner, more livable planet.

It’s time to take our future seriously, and do all that we can to stop adding fuel to the fire that is literally burning our planet out from under our feet.