Bernie Stands With Iowans, We Stand With Him 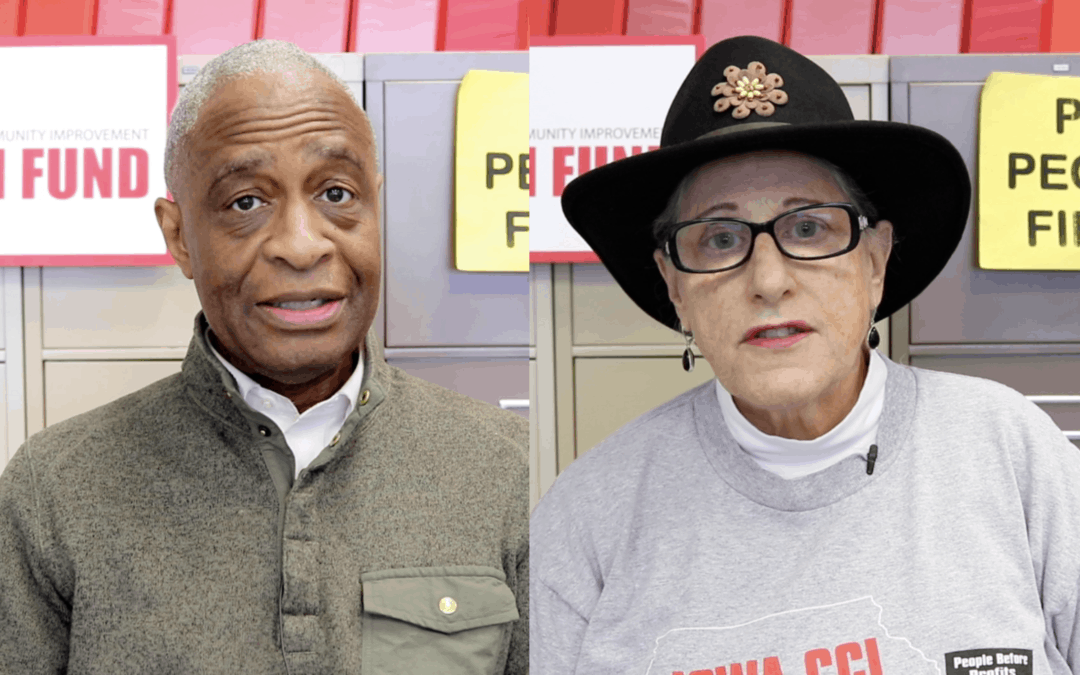 Cherie Mortice and Dartanyan Brown are longtime members of Iowa Citizens For Community Action. They are voting for Bernie Sanders in tonight’s Iowa Caucus, and joined us to explain why, and share some of their favorite campaign moments.
CHERIE:
I think this election cycle is an absolutely pivotal moment for us. This is no time for business as usual, because that’s how we got here in the first place. In this crowded field, only one candidate is going to be able to change business as usual – Bernie Sanders. We cannot compromise, and Bernie has proven time and time again that he will not waver, and he will not compromise.
DARTANYAN:
He ain’t in it for the grandeur, he ain’t there just to pander.  He won’t cave, and he won’t slander. He’ll just be Bernie - that's Bernie Sanders.
CHERIE:
Last June, we were with McDonald’s workers in Cedar Rapids, fighting for a $15 minimum wage and a union. It was a very hot day, but Bernie was out on the street with us, and I think that just exemplifies what he's about. He doesn't just talk the talk, he walks the walk.
DARTANYAN:

Bernie came to our house three weeks ago to talk with campaign workers. We cleared out our living room, and put in chairs for all the canvassers - Bob Costas from the Washington Post and all these guys from CNN were crowded in along the back wall. And Bernie never missed a beat.

Folks, don't worry about Bernie - he's got it. He has perfect rhythm, and handled all the questions from people elegantly, including putting things back on course.
He got up after the talk and went outside, where it was maybe 10 degrees. We had to tell him, “Hey, man, put your coat on, bro!” Then we, and this gaggle of reporters, walked our neighborhood in Northeast Des Moines. We stopped at four or five houses, and the energy that we felt there was just incredible.
That's why Bernie is leading - because he’s real. Sometimes people don't get this, because the media is so involved in the “horserace”aspects of coverage. Sometimes they fail to describe the substance of Bernie’s appeal. But trust me,  Bernie’s energy is real, and he has earned our support over decades of steadfast consistency.
Everything about that makes his visit to our home my favorite moment with Bernie, because it's something that he has earned. And right now, it's funny watching everybody scramble to try to derail it. But nobody who believes in Bernie Sanders is going anywhere this time.
I think that's what kind of started all this for me. Bernie has consistency of philosophy, clarity of intent, and conscious attention to the entire fabric of the American experience. As an African-American and as an Iowan, that matters to me.
CHERIE:
You know, I think the fact that Bernie fights beside us is something very unique, because there is no firewall between Bernie and our voices - that's what makes him stand apart from other candidates.
I'm standing with Bernie Sanders, and I'm endorsing him because I trust him, Over four decades, he has held on to the same ideals and values that are a reflection of our needs, and what we need as members of the middle class and the poor.
I was a public school teacher in Des Moines for many years, and I got involved with Iowa CCI because I had seen, year after year, the impact of a rigged economic and social system on my students. For many years I remained silent, but I saw the cost to my students. So I got to the point where I simply could not do that anymore.
Bernie has been resolute, even in times when he was considered radical. But health care, good education, clean water and a Green New Deal - these aren't radical ideas anymore. There's a groundswell of grassroots support for the kinds of things that Bernie is talking about, and we’re seeing that here in Iowa.
What separates Bernie from the pack is that he's a movement politics candidate - that means that he's not afraid to govern with us. When he says, “My campaign isn't about me, it’s about us,” what he means is, he is unafraid to co-govern. I trust Bernie when he says this, and he trusts us, too. That’s why we’re voting for him.