Why - And How - We Endorsed Bernie Sanders 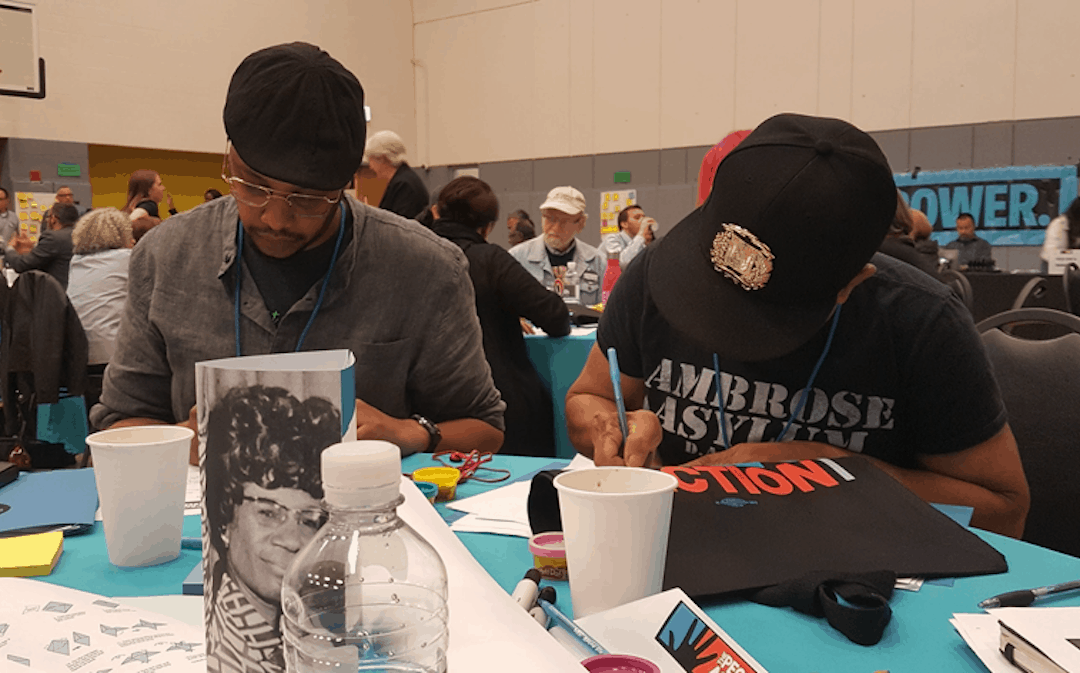 People’s Action has endorsed Senator Bernie Sanders for President of the United States.  We are proud of this choice, and of his values. We are also proud of the deep process that led us to this decision. It reflects our commitment to radical democracy, so every voice can be heard.

We are inspired by civil rights leader Bayard Rustin’s statement that, “If we desire a society that is democratic, then democracy must become a means as well as an end.”

Democracy is, and always will be, a work in progress. This is true in our nation, and it is at People’s Action.  Our members’ endorsement of Bernie strengthens and clarifies our commitment to the values he represents. It also strengthens People’s Action, and our ability to do democracy, in ways we are just starting to grasp.

That’s why we’re proud of our process.

People’s Action is a multi-racial working class people’s organization of dozens of state and local grassroots, power-building organizations united in fighting for justice.

We are governed by a board of directors that is elected by our member organizations through a body called the Delegates Assembly.  Each of our member-driven local or statewide groups sends two delegates to this Assembly, 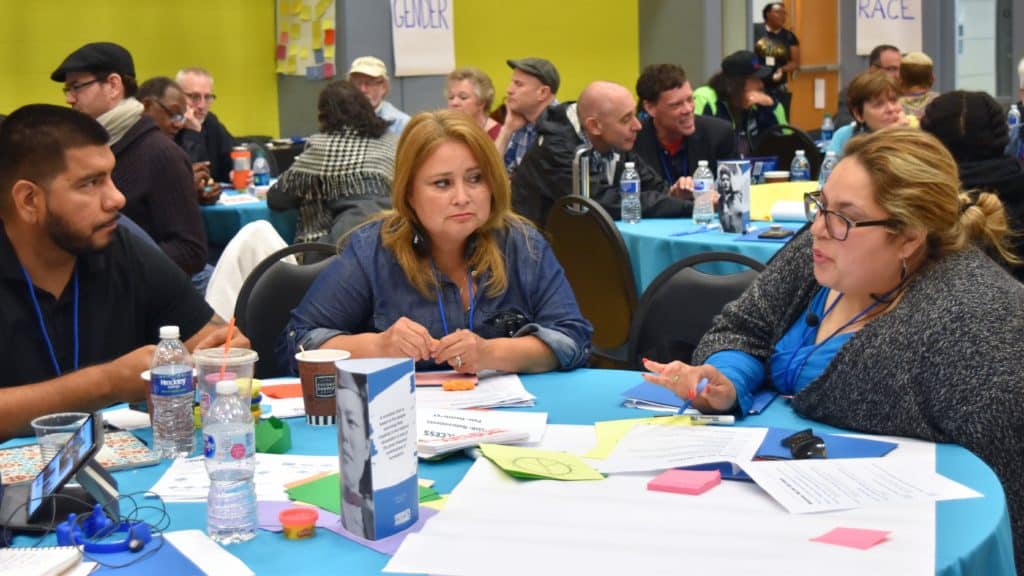 These Delegates vote on matters of critical importance to People’s Action, ranging from electing new members to the board, our issue platform and federal electoral endorsements. The delegates for each member organization include the local Director and one volunteer member-leader of that organization.

This design helps keep us grounded in, and accountable to, the member organizations in People’s Action and ensure member-leaders have decision making power in the organization.

The Delegates Assembly process has been inspiring. Picture lively debates, and decision-making by delegates from every corner of the country in gymnasiums, packed meeting rooms, or on evening video calls.  People find and raise their voices, as a big group wrestles with the complexities of governing an organization. 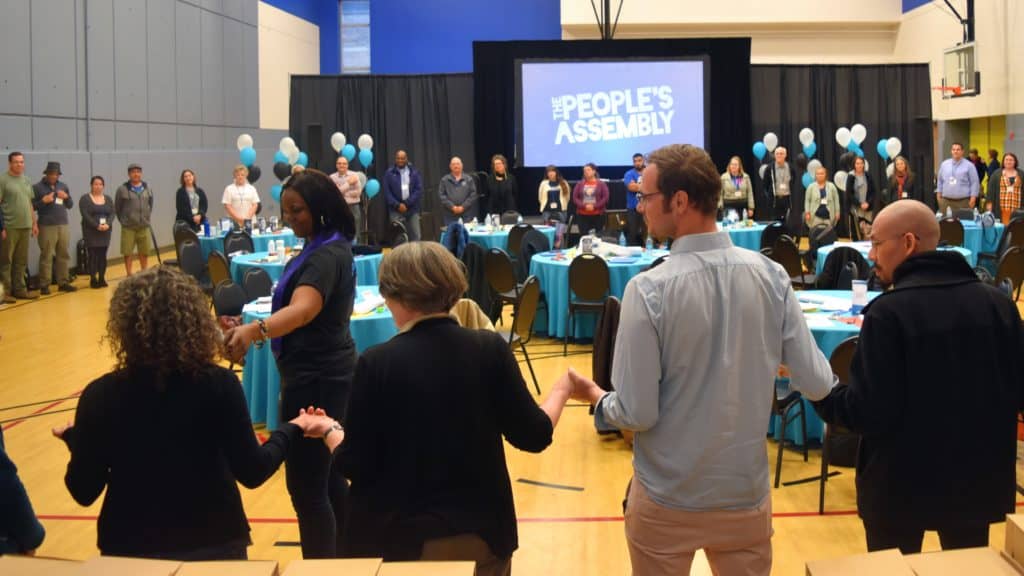 It’s this kind of radical democratic practice in our political home that makes People’s Action members more prepared to lead and  govern in other arenas.

First, we had to create the scope for our work for 2020, and to do that thinking together.  Eighty delegates worked this out over two days of discussion and debate in Chicago in the spring of 2018. We decided to develop a mass organizing plan for the 2020 elections, to help make sure the primaries were a primary of ideas, and discussed a timeline and decision-making structure for an endorsement.

This culminated in a formal vote on multiple proposals, including approving a plan for engaging in the 2020 electoral process, an official vote to formally adopt Improved Medicare For All in our platform, and the election of new members to the board of directors. 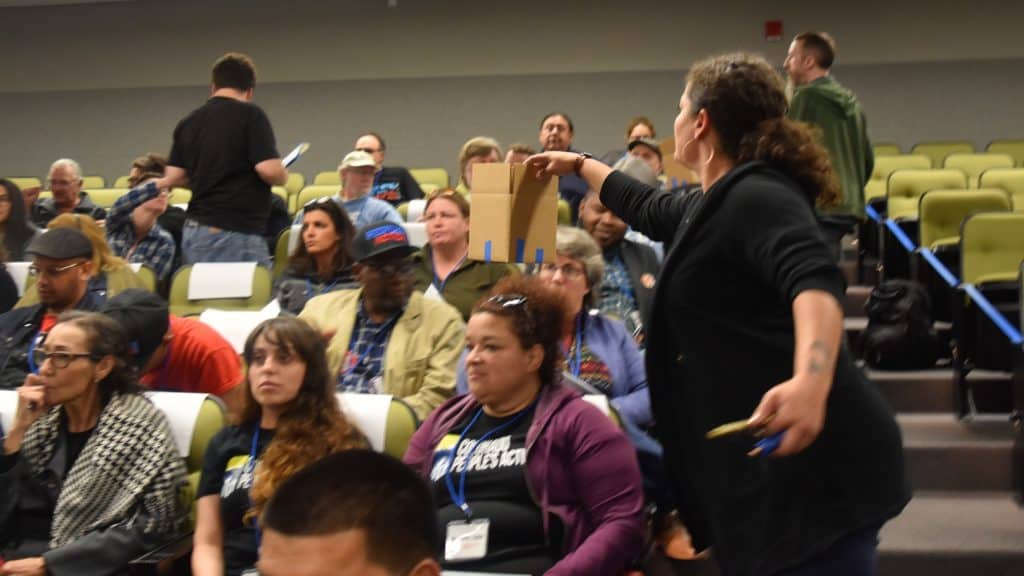 The ultimate proposals we voted on were different than the ones proposed at the beginning of this gathering - they’d been strengthened through debate, amendments, and insights from the previous two days.

One important part of that vote was that our endorsement required a two-thirds vote, and that we should also consider not endorsing any candidate. 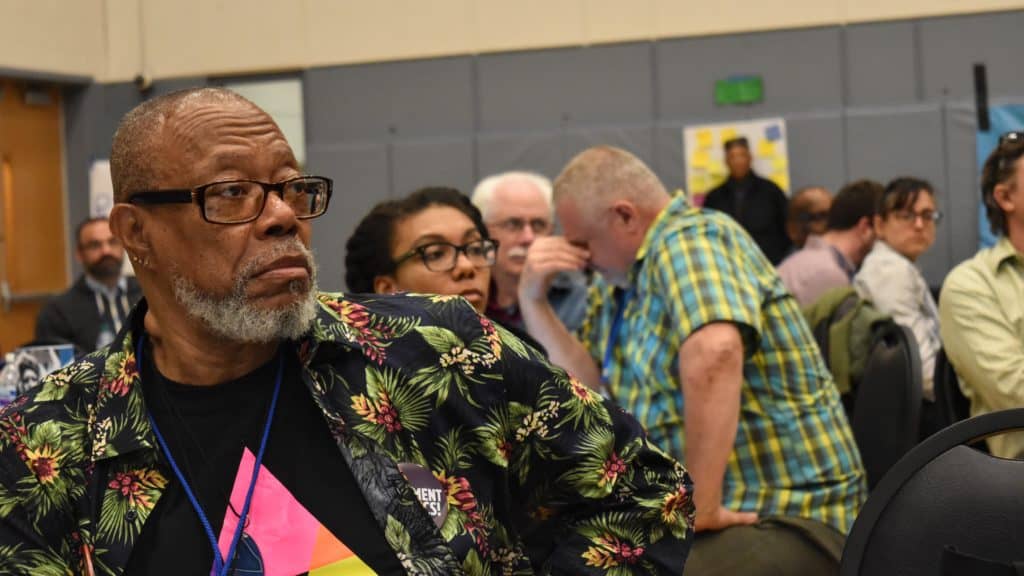 We agreed it was important to show up and speak out in the 2020 electoral process, when so much hangs in the balance, but we also felt the unity of the organization was even more critical than endorsing a candidate with less-than-enthusiastic support among our overall membership. 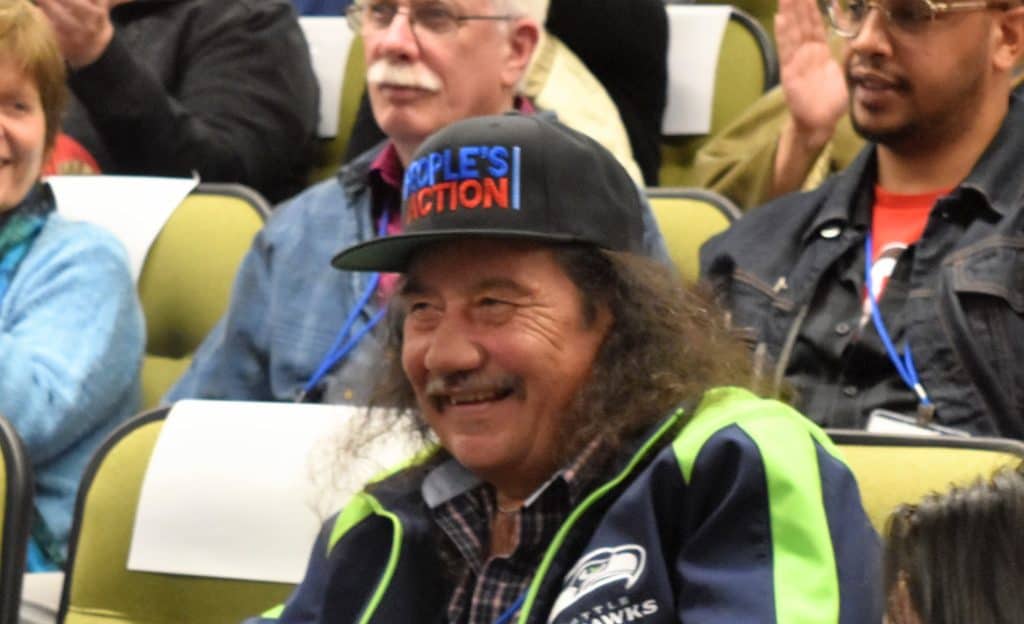 From here on out, meetings and calls were facilitated by leaders on the People’s Action 2020 Strategy Committee, made up of local leadership. They were tasked (by the Delegates) to drive the strategy forward with feedback from the delegates along the way.

The next step was building our 2020 People’s Platform, which we sought to approve at our April 2019 People’s Wave Convention, a gathering of a thousand People’s Action folks from across the country.

The 2020 People’s Platform was built off of a platform that had been in formation within People’s Action since 2017. In 2019, we put together a cross-sectional Platform Committee that had representation from each of our campaign and related cohorts (housing, healthcare, climate/energy, worker justice, overdose crisis, immigration, political healers/gender justice, etc.). They were responsible for representing their cohorts on the committee calls (lifting up their priorities and looking for intersections), as well as for bringing thoughts from the cross-sectional committee back to their issue-specific groups for feedback.

The ultimate platform proposal went to our Delegates Assembly for feedback and adjustments. Delegates were asked to bring iterations of the platform to their local membership for feedback. Final edits were then brought to an in-person gathering of the Delegates Assembly at our People’s Wave 2019 Convention, where an official vote took place. The approved platform was then released publicly and shared with all members.

Then, as we do at People’s Action, we threw a party to celebrate our new platform, in the spirit of joyous rebellion. A central part of our culture. 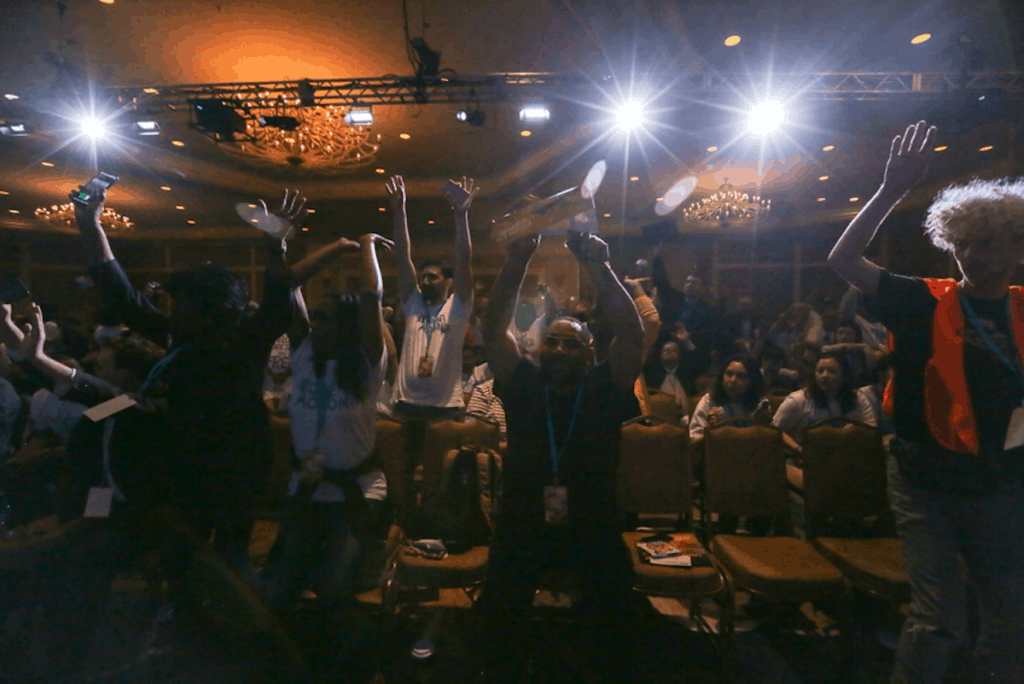 The 2020 Strategy Team brought a proposition for endorsement principles to the delegates body, which provided feedback and ultimately resulted in approval of the following:

The Iowa Presidential Forum—co-hosted by Iowa CCI Action, People’s Action, and Student Action—featured 2300 people from Iowa and other member organizations in the Midwest. The Nation called it the most “in-depth” and “poignant” forum of the presidential primary. You can view the entire Iowa People's Presidential Forum here.

Four candidates - Buttigieg, Castro, Sanders, and Warren - participated in Iowa and Congresswoman Ilhan Omar offered a keynote address.  The Guardian ran this opinion piece about the people’s forums as a way of centering everyday people in our politics.  One feature of the forums was that it was a #NoStumpZone - candidates had to listen to the experiences of everyday people, our members, as much as they talked.  We appreciate that all of the candidates who participated honored this.

Next up, over 600 members attended the Nevada People's Presidential Forum, which was hosted by our Nevada member organization PLAN Action and People’s Action.  This forum was special in the number of young people of color who had the opportunity to directly engage with candidates. Secretary Castro, Senator Sanders, and Andrew Yang participated. Congresswoman Pramila Jayapal delivered a keynote address.

A large forum was also planned in New Hampshire, but had to be cancelled after scheduling conflicts.  Senator Sanders then offered to do a smaller event, anchored by our members organizations Rights and Democracy and the New Hampshire Youth Movement, and People’s Action members from surrounding states, took place in a barn in Claremont. Senator Warren also did a video call with our New Hampshire members, which was open to all People’s Action member organizations

Campaigns we assessed as having a reasonable shot at our endorsement were asked to complete our candidate questionnaire.

Pete Buttigieg, Kamal Harris, Julián Castro, Bernie Sanders & Elizabeth Warren all responded, and we shared their responses with our members and the public. The answers can be found here. 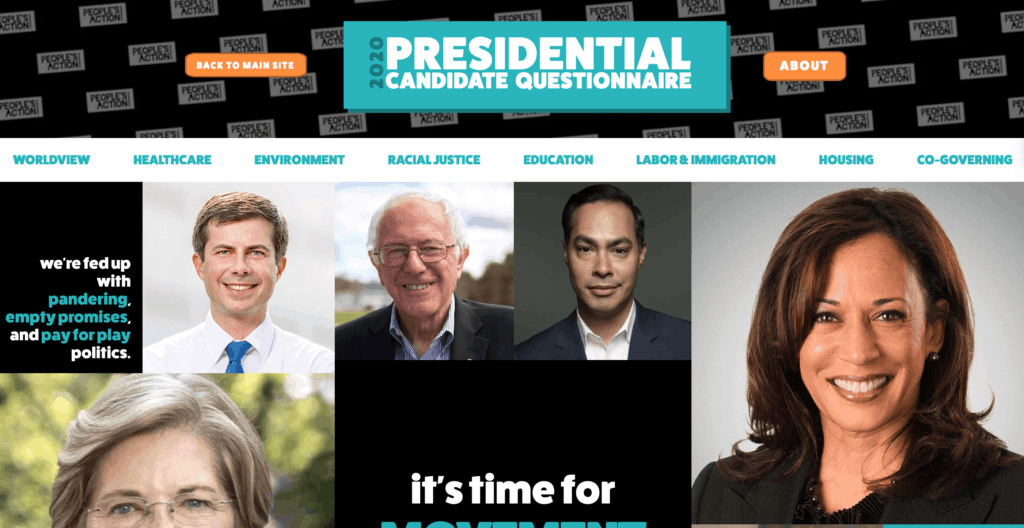 Delegates then asked the national staff to provide written and oral assessments of the candidates’ responses and shared these with the Delegates as well.

In an effort for people to get a sense of how their comrades were thinking about the process and how different local contexts informed how they would vote, delegates from different states were paired up to digest the process and share their thinking with each other.  In addition to people learning about each other’s context and local endorsement process, this was also just good for building relationships across different regions.

On November 7th, we held an initial set of Delegate votes on endorsement. Delegate's decided to narrow to our top three choices and revote in December. Then in the evening on Thursday, December 12 on a Delegates Assembly video call, Senator Sanders won on the first ballot, taking 73.6 percent of the vote, followed by Senator Warren and Secretary Castro.  The first reporting of the endorsement was done by Politico.

When asked to describe how they felt about the process - not the outcome - here are some examples of what delegates said.

“Everything take longer than you expect, but process matters”

“I am proud to be part of this organization”

We feel we have made the right call in endorsing Senator Sanders. It strengthens and clarifies our commitment to the values he represents. It also strengthens People’s Action, and our ability to do democracy in ways we are just starting to grasp.

We also feel even more sure that as we practice democracy as a means, we are more likely to get there in the end.