We Need A Real Trade Deal With China, Not Just A Truce 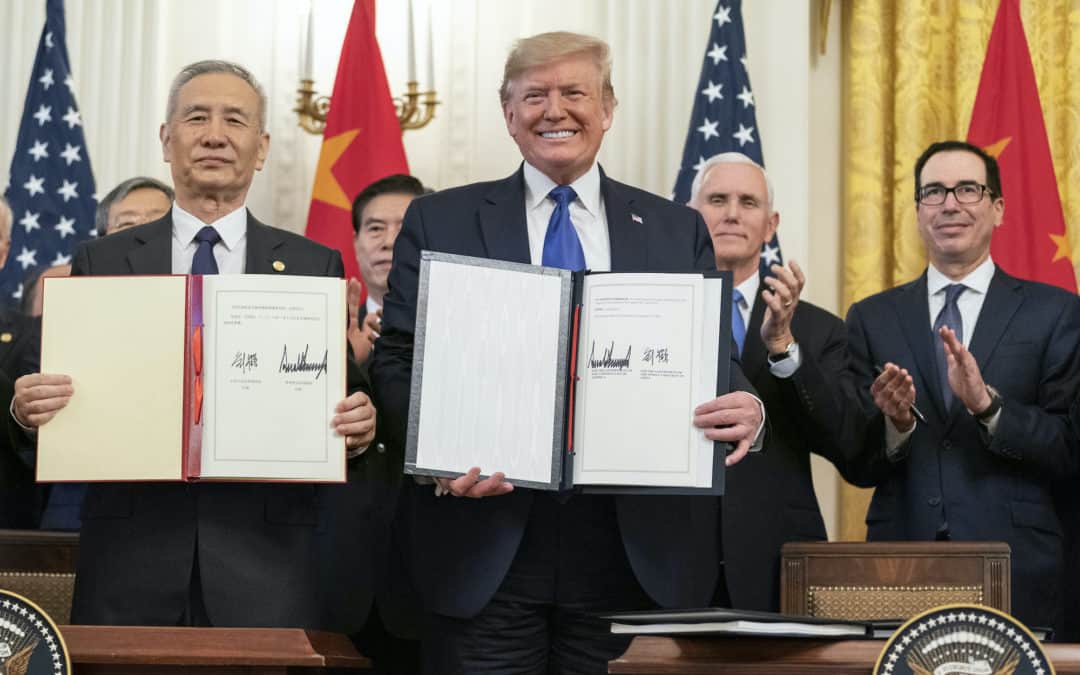 Trump crows the “Phase One” trade agreement with China is a "promise kept" to his supporters to rebalance trade between the two nations. But it is really just a temporary truce in his trade war. This truce may not last long or deliver anything close to the outcomes he has promised.

In the deal, the U.S. will reduce some of its tariffs in exchange for a pledge from China to restore trade levels to where they were when Trump started the trade war, and buy an additional $80 billion in manufacturing goods from the U.S., $50 billion in energy, $35 billion in services, and $32 billion in agricultural goods over two years.

But Trump's China trade deal may blow up well before 2022, because it leaves the deeper sources of tension between the two countries untouched. This means a renewed escalation is likely after the 2020 elections, if not sooner.

In order to avoid more harm to the U.S. economy, farmers and workers, we must bring a permanent end to the trade war and set the U.S.-China relationship on a fundamentally different path based on progressive priorities that counter Trump’s nationalism with a spirit of international solidarity.

Trump's two-year trade war has already been immensely destructive to the U.S. economy. Rather than reviving U.S. manufacturers and creating an avalanche of new jobs, as Trump promised, it has pushed the manufacturing sector into a recession. It has increased the cost of raw materials, reduced sales, and increased economic uncertainty, which has caused business investment to shrink and therefore killed jobs. The two states hardest hit by manufacturing job losses are the swing states of Wisconsin and Pennsylvania.

Farming communities, too, have suffered  losses of more than $20 billion dollars, roughly a 50-percent drop in agricultural exports to China, forcing many farmers in states like Iowa and Ohio to plough their rotting crops back into the soil. This has caused the highest number of farm bankruptcies since 2011, affecting family farmers the most, and cost taxpayers as much as $28 billion, as the Trump administration has made direct payments to farmers to conceal the tide of farm failures.

While the Phase One agreement will hopefully stop things from getting worse for manufacturing workers, farmers, and the economy as a whole, the terms of the agreement leave much to be desired. First, Phase One lacks any mention of labor rights. In fact labor rights have not been part of U.S.-China negotiations at all, even though an agreement on labor standards would do more than anything to improve the status of workers in both countries.

Phase One also exacerbates the climate crisis. It requires China to increase energy purchases from the US by $50 billion, which will mostly be in the form of oil and gas. Meanwhile the deal leaves in place tariffs on solar panels, which, according to estimates by the solar industry, have cost over 62,000 jobs, $19 billion in investment, and 10.5 gigawatts of solar energy capacity. These solar tariffs did not target China specifically, but China has the world’s top solar industry, and it was largely imports from China that were affected.

Finally, while Phase One includes temporary gains for the agricultural sector, it also locks in the model of corporate agriculture that pushes all farms into overproduction, creating a surplus that can be exported for profit, but also lowering commodity prices. This results in the loss of small- and medium-sized family farms, consolidation under large agribusiness companies and the spread of destructive practices such as concentrated animal feeding operations (CAFOs).

China’s commitment to increase its purchases of U.S. agricultural goods by $32 billion over two years is indeed a substantial increase over the $20 billion in purchases in the years preceding the trade war. But there are concerns that this exceeds the productive capacity of U.S. farms, which means that production must increase, which is likely to exacerbate the longstanding trends of overproduction and consolidation that benefit the largest and wealthiest companies at the expense of smaller farms.

The Folly Of “Structural Issues” In The Trade War

Left unaddressed in the Phase One agreement are the so-called “structural” issues in China’s economy that trade negotiators have long viewed as harmful to the U.S. economy.  But a closer look at the existing demands around these issues reveals that they are not designed to benefit the majority of Americans. Rather, they increase the power of U.S. corporations against their Chinese competitors, with no discernible benefit to workers in the United States.

The first “structural” demand is that China improve protections for intellectual property, especially intellectual property owned by U.S. corporations. This has long been a priority for U.S. trade hawks, because U.S.-based companies dominate many of the most lucrative sectors guarded by intellectual property rights, such as advanced pharmaceuticals, computer chips, and software. Success would secure even greater profits for these corporations. Channeling even more money to well-off investors would further concentrate wealth at the top in the U.S., which is a recipe for continuing weak consumer demand and political discontent.

Ordinary Americans would have to wait for the benefits of enhanced intellectual property rights to “trickle down” to them, and may even suffer job losses: by raising consumer prices and slowing growth in China, stronger IP exclusions would damage the prospects of other U.S. exporters in the Chinese market. The U.S.-China rivalry over intellectual property also undermines our ability to collaborate in the development of clean technology, which optimizes the use of natural resources to reduce environmental impact, and other research and investment to address the climate crisis.

The second “structural” demand by U.S. negotiators is that China give up its successful use of industrial policy at the state level, including public investment and prioritizing specific sectors to drive economic development. The aim is to force China to submit to the free-market fundamentalism that in the United States is a primary cause of soaring inequality, and has blocked investment in infrastructure and initiatives to address the climate crisis.

For China to accede to this demand would undermine its own economic development model and climate resiliency, and would harden inequalities between the U.S. and China. It would also embolden the rightwing forces in the U.S. that are opposed to developing a national industrial policy for the U.S. at a time when it is desperately needed in order to deal with the climate crisis, among other problems.

These two “structural” demands are assigned the greatest importance by U.S. negotiators. They are also the most difficult, if not impossible, demands for the Chinese government to agree to, as they amount to destroying China’s economic model and its legitimate hopes for economic development. So long as the U.S. continues to make these demands, the trade war is doomed to continue and escalate, notwithstanding the temporary truce of Phase One.

Another grievance against China has been accusations of “currency manipulation.” The Chinese government has long been accused of guiding the value of its currency, the yuan, to keep Chinese exports cheaper than those of competitors. While some argue China did this prior to 2016, and Trump did accuse China of currency manipulation early in the trade war, this has been less frequently discussed and the administration rescinded this label early in 2020 as the Phase One deal approached.

Progressives differ in their evaluation of this issue. Some view it as a key problem in the U.S.-China relationship, while others are skeptical. Progressive economists Anwar Shaikh and Isabella Weber, for example, have recently argued that the chronic trade imbalance between the two nations reflects underlying issues of unequal competitiveness in a free market, in which China consistently produces and exports many products more cheaply than the U.S., more than currency manipulation.

Even if it is only temporary, progressives must use this truce in the escalating trade war with China to build power around a truly progressive alternative. This means rejecting the Trumpian worldview, in which all our problems are due to other countries, and embracing solidarity across borders, grounded in the recognition that we face shared problems and must come together around shared solutions.

In both the U.S. and China, millions endure low wages and excessive work hours in undignified and insecure jobs. In both countries, people struggle with expensive housing, unreliable health insurance, and inadequate public services. In both countries, millions are threatened by the climate crisis. These shared problems have a common cause: a system of global corporate power controlled by unaccountable elites. U.S. workers cannot protect themselves by punishing workers in other countries. Rather, we must work together across borders to transform the global economy and reject nationalists in both countries who seek to pit us against each other.

Progressives should demand a permanent end to the trade war, not just a temporary reprieve. Instead, we should demand progressive alternatives to both the trade war and the free-trade status quo which preceded Trump, and renew negotiations with China around progressive priorities. This must include shared standards for wages and labor rights. It must also include a new agreement around the climate crisis which extends the model of the Green New Deal across borders, bringing the U.S. and China into much deeper collaboration around scaling up clean energy infrastructure worldwide.

We should negotiate ways to promote technology sharing in crucial areas, starting with clean energy technology. A shared plan for investment in clean energy infrastructure would spur innovation and lead to the creation of more than enough green jobs to go around, ending the perceived need for countries to compete with each other in this area. To improve the status of farmers, we can replace the current corporate agricultural model of overproduction for export with the supply management system proposed by family farm organizations and embraced by the presidential campaigns of Senators Bernie Sanders and Elizabeth Warren.