Will The 2020 Contenders Take On Inequality? 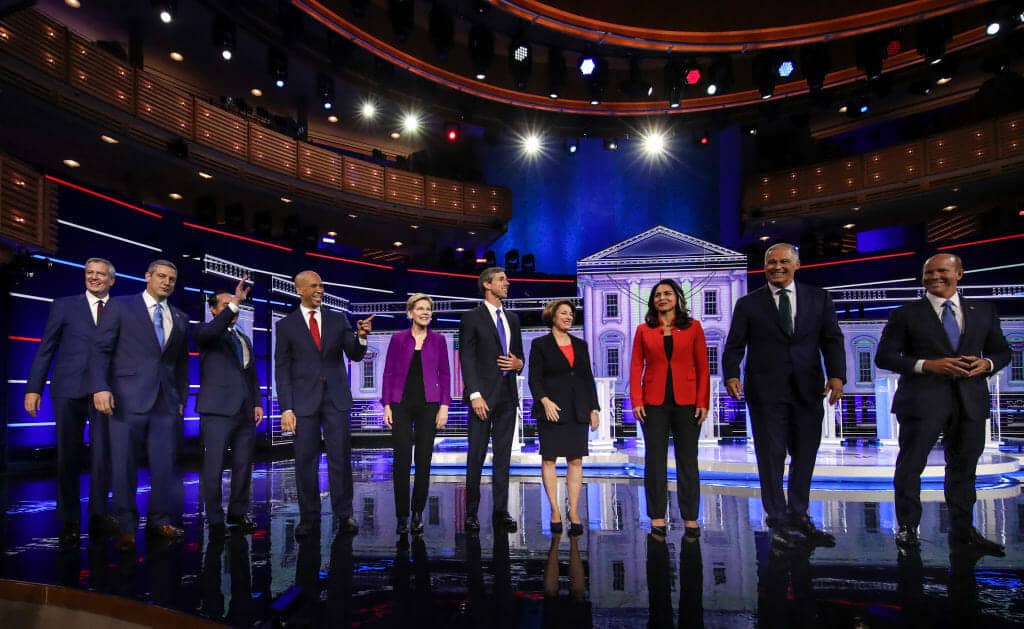 Is America’s political discourse on inequality finally getting real?

In the early going of the 2020 presidential campaign, this has become a question worth asking. White House hopefuls have been condemning the maldistribution of America’s income and wealth with an intensity—and a specificity—that would have been unimaginable just a few years ago. And the rich are squirming. They see candidates proposing unprecedented taxes on their assets and even questioning their right to exist. Perhaps most worrying, this time moderates aren’t exactly rushing to their defense.

At the October Democratic primary debate, for instance, Senator Bernie Sanders delivered one of his trademark blasts against the billionaire class.

A good many billionaires, of course, do expect to be protected, and the unwillingness of the 2020 Democratic field to fawn over their fortunes has the awesomely affluent feeling like a persecuted minority. The nation’s richest may not have felt this aggrieved since President Franklin Roosevelt declaimed, “I welcome their hatred,” back in the 1930s. Calls for a wealth tax—Senator Elizabeth Warren’s signature initiative—have our deepest pockets particularly pained.

“This is the fucking American Dream she is shitting on,” as billionaire Leon Cooperman told Politico.

Has campaign 2020 indeed put America’s superrich at existential risk? Or are our wealthiest merely hyperventilating? The Nation and the Institute for Policy Studies, the publisher of Inequality.org, decided to find out. IPS analysts first prepared a candidate questionnaire designed to divine the depth of each presidential hopeful’s commitment to challenge inequalities of income and wealth. The survey then went to all the major party candidates, Democrats and Republicans alike.

But candidates have a nasty habit of ignoring questionnaires that leave them uncomfortable. So IPS analysts also scoured the printed and online record for the candidates’ inequality-related plans and comments.

What has all this sleuthing found? Those who seek our nation’s highest office—at least on the Democratic side—no longer see safe harbor in the warm embrace of the ultrarich. To be sure, our political class has not yet abandoned the billionaire class. But the political consensus that nurtured our contemporary top-heavy economy has cracked.

To appreciate just how much, we need to start with a little history.

In the early 1900s, after a generation of Gilded Age excess, American progressives of most every stripe arrived at a broad common vision of how best to mold a decent society. The nation needed, reformers and revolutionaries agreed, to narrow the grand divide that separated the nation’s poor many from its most privileged few, and that meant focusing on both the absence of wealth and its concentration. Americans needed to battle, as publisher Joseph Pulitzer put it, “predatory poverty” as well as “predatory plutocracy.”

This commitment to leveling up the downtrodden and leveling down what the philosopher Felix Adler termed “pomp and pride and power” would animate struggles for justice throughout the decades ahead and dominate the New Deal’s political discourse. The same egalitarian ethos would guide us through World War II and into the postwar world.

But this progressive consensus on inequality did not survive the Cold War. With the capitalist-boss-baiting Soviet Union our archenemy, anyone who continued to trumpet New Deal distributional themes was suddenly deemed dangerously subversive. By the early 1960s, top Democrats were no longer talking up the importance of taxing the rich. John F. Kennedy’s New Frontier assured Americans instead that a “rising tide lifts all boats.” We needn’t worry about the wealthy, the new party line went. If we just cut taxes to grow the economic pie, everyone could get a bigger piece.

By the 1990s, with no one in political power worrying about the wealthy, the predictable had taken place: America’s richest had become fabulously richer, amid rising poverty and flatlining wages. Republicans and Democrats shared responsibility for this. Both parties deregulated and privatized. Both lavished subsidies on the wealthy and their enterprises. Both hailed the rich as job creators.

“I’d like to create more millionaires than were created under Mr. Bush and Mr. Reagan,” Bill Clinton even opined in 1992’s first general election presidential debate.

Clinton succeeded at that task, as has every president since he left office. Will that pattern change if voters choose one of the candidates running to replace Donald Trump? Are these office seekers pushing policies and programs that hold out hope for a significantly more equal America?

Class wars unfold on multiple fronts, and virtually all national policies and programs affect how equally we distribute our income and wealth. But some fronts affect income and wealth distribution more directly than others. The Nation/IPS inequality questionnaire highlights these battlefronts, focusing on struggles that involve everything from taxes and intergenerational transfers of wealth to CEO pay and the composition of corporate boards.

The questionnaire is online at inequality.org/2020, as are the candidates’ full responses. No candidates seeking the GOP’s 2020 nomination chose to complete the survey, and none of them have made much of an effort on the campaign trail to address the inequality concerns that it raises.

The Democrats who chose not to complete the survey, by contrast, have commented on many of the questions it poses. The profiles that follow rest on those comments as well as the completed surveys.